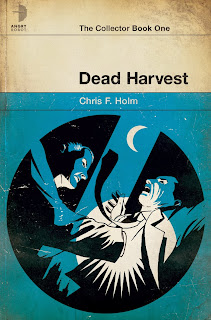 I really don't know how to categorize Chris F. Holm's Dead Harvest. I want to call it horror. It deals with the supernatural, particular demons. So, horror. But the publishers, Angry Robot, insist that the novel combines "urban fantasy and noir-dark crime." I don't know what urban fantasy is, or I didn't until I googled it just now. And I'm not sure Dead Harvest is that. So, I'll call this a horror novel. I am also hesitant to call this a crime novel. The story centers on a possible war between Heaven and Hell, not rival gangs. Holm certainly draws (wisely) from the style and motifs of noir and hardboiled fiction. And the title is a play on an underrated classic in the genre, so I'll let the crime/noir part stand.

The story: Sam Thornton, once a regular Joe, is a Collector. His job is to ferry the damned to Hell.  When Sam is tasked with collecting the soul of Kate, a 17-year old girl who had murdered her family, he discovers that she's been set-up by demonic or angelic forces. Sam's collecting of her soul could lead to a war between Heaven and Hell. So he does what anyone would do: he grabs the girl and goes on the lam.

Dead Harvest was by and large a good read, though it did take me a couple starts to actually get further than forty pages. This was perhaps more my fault than that of the author. I have heard this story -- the war between Heaven and Hell -- before, in The Prophecy and in Garth Ennis and Steve Dillons run on Hellblazer, and later Preacher. I wasn't keen on reading another one. Of course, a good book does not have to be original. Crime fiction and comic books, my preferred forms of entertainment, are by no means highly original or consistently imaginative in their products. So, with this in mind, I began Dead Harvest afresh and ended up enjoying it.

Holm made wise decisions in applying some of the stylistic devises and gimmicks of classic crime fiction -- and in what he choose not to use. Holm avoids cliches (P.I., femme fateles, two-time losers), opting instead to draw on the narrative structure of classic noir. The author's attention to the urban landscape, sparse rather than over-detailed, evokes the moodiness of film noir. Sam and his charge Kate flee through an urban environment that is often hostile, often resistant, chased by angels and demons and New York's finest. Make it mobsters and crooked cops, and this is classic noir. Richard Widmark would have been great in it.

The book's strength is Sam Thornton, as both a narrator and a sympathetic character. Sam struggles to retain his humanity, a Sisyphean task since being a Collector is an eternal gig. In order to stay human, Sam holds onto his guilt, his regret and shame -- which Holm's illustrates through the infrequent use of flashbacks. Dead Harvest being the first in a series (followed by The Wrong Goodbye and The Big Reap), a sympathetic lead is ideal.

The ending was too quick and clean. I have to penalize.

Lastly, the book as a physical object is nice. Designed to look like an old paperback, it's two-tone comicy imagery and faux wear is delightful. I did not intend to buy the physical copies, but my e-reader took a shit a few months back and I have returned to actual book reading. Getting the Collector series in the mail was itself a nice little event.

Bonuses: +1 for book design; +1 for not trying to be Mickey Spillane

Penalties: -1 for too quick an ending