After some relatively slow weeks, a great week of comics has landed upon us right in time for the holiday season!  This week features six, count 'em, six comics!  All out war continues for The Walking Dead, a new arc of The Sixth Gun is here, and Andy Diggle concludes Captain America: Living Legend.   2014 looks to have some fun for us as well as Dark Horse announced an official 20th Anniversary celebration for Hell Boy.  Mark your calendars for March 22 and plan for some fun events at your LCS. 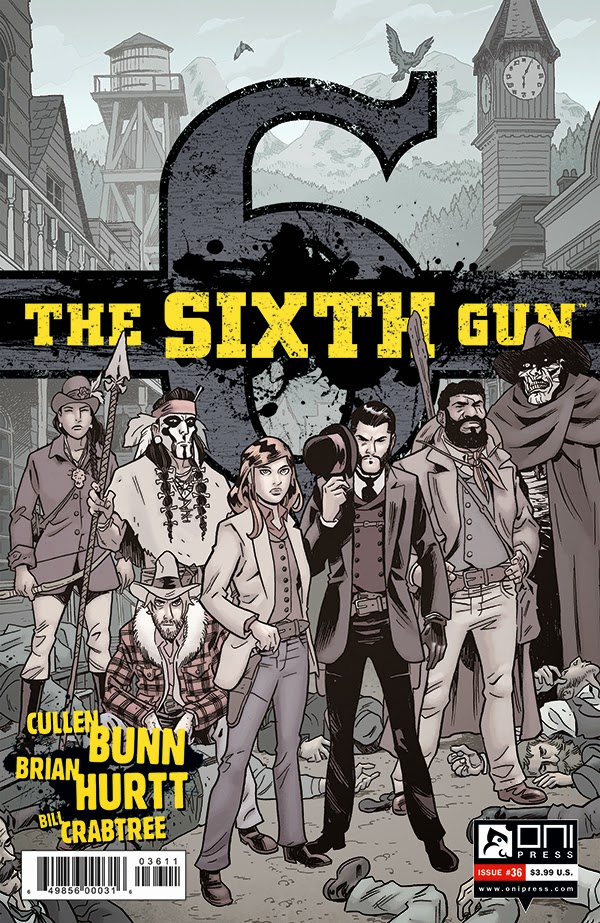 Pick of the Week:
The Sixth Gun #36 - It appears that it may be the beginning of the end for the Sixth Gun.  Cullen Bunn delivers one of the most exciting comics I have read in recent memory.  It is bittersweet that it looks like the series will be wrapping soon, but I trust in Bunn's decision in how Drake (I hope) will remake the world once they are in possession of all six guns.  Drake and Becky are in possession of five of the six and are hellbent on claiming the final one from Missy Hume.  They return to Brimstone, where the series began, to learn as much as they can about Hume.  Meanwhile, Griselda has killed the widow Hume and is raising an army of the undead to take down Drake, Becky, and everyone else.  On top of that, Griselda enters Asher Cobb's vision and is attempting to turn him against Drake.  Also, I still don't like Kirby Hale one bit.  I don't trust that pretty boy.  This new arc started with a bang and has reinvigorated my interest in this series.  I look forward to revisiting this story from the beginning over the weekend.  I also want to give props to Brian Hurt for delivering on some chilling panels in this issue. Bunn and Hurt remind me of Joe Hill and Gabriel Rodriguez.  Their work compliments each other so well it wouldn't feel right if they weren't working together.

The Rest:
The Wraith #2 - I've never met Joe Hill, but I have seen him on some panels at SDCC and he seems like a normal and nice man.  However, reading this comic makes me fearful of his little bearded self.  I am enjoying this title, but Charles Manx is an awful human being and Hill pulls no punches in establishing just how evil he is.  Not for the faint of heart, but if you are reading Hill's work then you have an idea of what you will be getting.  If you read NOS4A2 (you really should) then I would highly recommend this title.  I look forward to my first trip to Christmasland in issue #3.

The Walking Dead #118 - The war on the outposts wages on for Rick and his crew.  This issue, despite being chalk full of walkers and shoot-outs, felt much slower and less brutal.  I would guess this was intentional as Robert Kirkman delivered a more emotional issue that showed the sobering side of war.  One of my favorite moments was actually on the letters page.  It is clear that the folk at Skybound and Image have a good sense of humor and are on the pulse of their fans.  This was a good calm before the storm.

Star Wars #12 - While I am still conflicted about the information from Brian Wood's past that came to light recently, I must say I enjoy his writing a great deal.  One of my favorite things about this Star Wars series is the additional depth and context that is provided for many of the smaller characters.  Mon Mothma has been shining as of late as the Rebellion landed a fleet of TIE Interceptors.  Leia has located a planet, Arrochar, that sounds like it will be friendly to the Rebellion.  We will have to wait until issue #15 to see if her decision was a good one as the next few issues will focus on Vadar.

Captain America: Living Legend #4 - Andy Diggle wrapped up his mini-series quite nicely this week. The highlight was Captain America looking like Cthulhu as he was taken over by the dark energy that possessed Volkov.  I quite enjoyed learning why Volkov has it in for Cap (I won't spoil) and appreciate a short, to the point, story that is entertaining.  Not the deepest comic I have read this year by a long shot, but a great story that is worth your time.

Batman #26 - Zero Year continues and we gain more insight into the past life of Bruce Wayne when he was first Batman.  While I have enjoyed Zero Year, there is something off putting about a young Bruce Wayne that causes it to lose its Batman feel.  I can't explain why, but this current arc is enjoyable, but not memorable.  At least this one is the origin story of Commissioner Gordon's trench coat.  If you are a Batman fan you will enjoy it, but it lacks the punch of the previous arcs.
Posted by Mikey N at 3:00:00 AM