Yesterday marked one of the most bittersweet moments in my time as a comic book fan.  The beginning of the end in Locke and Key.  Locke and Key is one of those rare comics that transcends the medium.  When I typically find a comic that I enjoy I will only pressure my friends who read comics.  With Locke and Key, I would tell everyone I could think of to read this treasure.   I have been thanked numerous times for turning people on to the world of Locke and Key and will hopefully continue to spread the word of this literary masterpiece.  I know it will be a while before we revisit this world at the conclusion of Alpha, but I look forward to the day when Joe Hill and Gabriel Rodriguez bring us back to explore the history of Keyhouse. 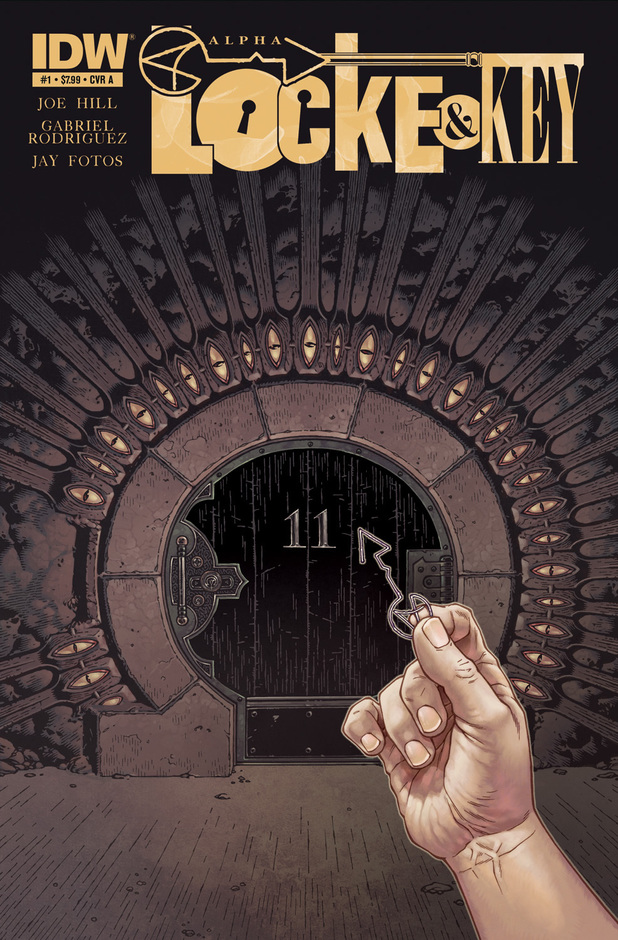 Pick of the Week:
Locke and Key: Alpha #1 - I must admit that I was scared to read this issue.  The book sat next to me for most of the day taunting and daring me to crack the cover.  I wasn't scared because a series I loved was coming to its conclusion, I was scared for the well-being of the characters contained in its pages.  Dodge does not pull any punches after he opens the doorway to his sick and twisted brethren and I was honestly terrified as I read this issue.  I will not chance spoiling anything in this issue, but tears were shed, there were moments of celebration, and the alpha key is both a godsend and horrifying at the same time.  In addition to what seems to be a fitting ending to the opus from Hill and Rodriguez, the issue was packed with extras including photos from the filming of the failed pilot.  The bonus material felt like a gift for fans that reminds me of the attention to detail this series has had since its inception.  I am looking forward to the conclusion and to the immediate reread that will follow.

The Rest:
Walking Dead #114 - All out war is one month away and I am looking forward to staying up past my bedtime for the midnight release of issue #115.  In the meantime, the survivors finally chase Negan and his crew off their land and begin to prepare for an attack.  This week's highlight was when Ezekiel's tiger got off his leash for a snack.  Negan once again displays what a lowlife he is in the final bit of dialogue as he describes his gang as the big swinging dick of this world.  He does have a way with words.

Batman and Robin #23.2 Featuring Court of Owls - I was a sucker for the Court of Owls arc that launched Batman into the New 52 and decided to give Forever Evil another go to read more about the Court.  James Tynion IV, who penned many of the short stories in Scott Snyder's Batman run, schools us on the history of the Court and how they have remained in power for so long. We are teased with the history of the first talon, an out of control killing machine who turned on the Court, who is about to be awakened.  I am glad I returned to Forever Evil and will be sure to read part 2.


What I should have read:
Ghosted #3 - It shouldn't be too surprising that an Image title is generating some

positive buzz.  I gave Cloned a chance and had my doubts, but after reading the first trade I might revisit it.  From what I have read about Ghosted, it is a series that is full of secrets and chills that really rewards its reader.  The first two issues are only $1.99 on ComiXology so I may have to give the series a whirl.
Posted by Mikey N at 3:00:00 AM