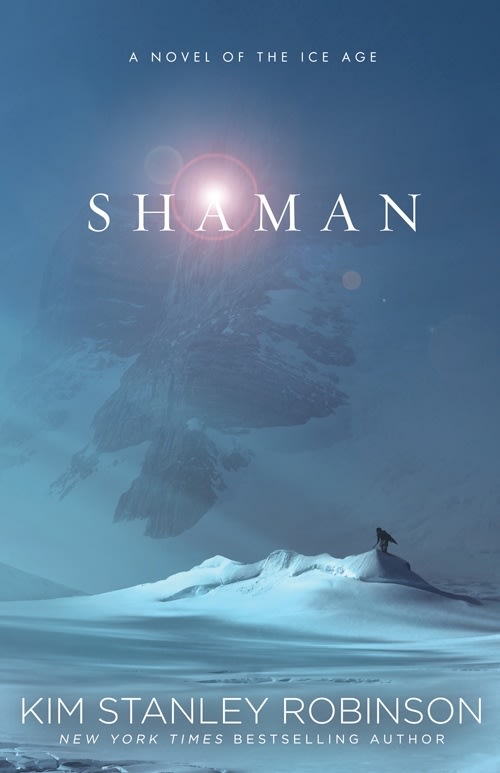 Kim Stanley Robinson is primarily famous for his Mars Trilogy, as well as the highly-regarded (and Nebula-nominated) space opera 2312. He's also written a few other books, several of which are in essence conversations with, or science fictional mediations on, history. Shaman is sort of that, though when I say "science" I mean anthropology rather than the usual physics, engineering and so forth.

This is a book about "cavemen," homo sapiens sapiens of the upper paleolithic period, animistic hunter-gatherers from Africa who coexisted for a time with the slower but stronger homo sapiens neaderthalensis. Though the book follows Loon, a shaman's apprentice, the first half of the book is decidedly anthropological in tone, with Loon's adventures mostly a device through which to explore the world he inhabits. We are introduced to the Wolf Pack, their semi-sedentary lifestyle and their customs. It's fascinating, but can be slow-going in the way classic ethnographies of hunter-gatherer societies often are ("here's a lengthy catalogue of all the marriage rituals; now here's a lengthy catalogue of of all the folk dances," etc.).

There's also a goofiness to Robinson's attempt to establish a prehistoric lingo, the same issue a lot of cyberpunk has with futureslang. Like, "for a knapper he chose a big long chunk of chert." Huh? Is this an attempt to avoid modern terms? If so, then why does Loon say "mamma mia" multiple times? And "pizzle" is just a terrible stand-in for the male genatalia, unless you are Snoop Dogg circa 2003.

That isn't to say the first half is bad. Actually there's tons I like about it, especially Loon's interactions with the Neanderthals he comes into contact with. There's a sadness there, the knowledge that these other humans--who aren't dumb as much as clever in a different way--won't make it. And it's a sadness that the homo sapiens sapiens are at least partially aware of.

That said, the book really takes off about halfway through. Loon's wife Elga, a runaway from another tribe, gets stolen back and Loon goes after her. I'm wary of saying more, for fear of spoiling my favorite part of the book for you, but there's some deep political shit in there, alongside a thrilling story. Without ruining things, let me just tell you to pay attention to Robinson's view of what drives exploitation, and suggest that it's the opposite of what fellow SF giant (and friend) Iain M. Banks proposes in his Culture novels. Something to chew on, at least.

Shaman also deals, in great detail, with the mechanics and meanings of cave painting. Much of this is speculative, but these scenes are grounded in real history--as the book progresses, it becomes clear that Loon and Thorn are painting the exact scenes and motifs found in the Chauvet Cave, featured in Werner Herzog's brilliant documentary Cave of Forgotten Dreams.

Though the faults I've outlined are, at times, distracting, Shaman is on balance a pretty extraordinary read. I'd recommend without hesitation for anyone looking for something different, as well as for those who have, like me, often wondered what life might have been like for prehistoric humans. I haven't read a caveperson book since Clan of the Cave Bear, and I'm pretty certain that one sucks in comparison to Shaman. So if you are looking for something different, and a book that will stick with you long after you put it down, then Shaman could be a great fit for you.

Bonuses: +1 for taking the concept of "hard social science fiction" seriously; +1 for being a pretty fascinating and unique reading experience; +1 for making the prehistoric come alive.

Penalties: -1 for pizzle; -1 for other lingo-related issues; -1 for pacing issues early on.