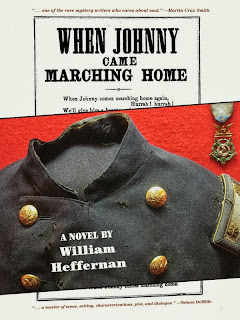 I'll admit it: Everything I know about the Civil War, I learned from watching Ken Burns's PBS series. But I have watched it a few times.

William Heffernan's When Johnny Came Marching Home is marketed as a "historical mystery." It's a bit better on the historical end than the mystery. The narrative jumps around in time, following three friends their home in Jerusalem's Landing, to the battlefields of the Civil War, and back to Vermont -- well, two of the buddies, at least. (I'm not spoiling anything. It's on the back cover jacket.) One of them, Jubal, is now (1865) the town's deputy sherriff, the other one, Johnny, a psycho and, by the beginning of Chapter One, a corpse. The prime suspect is a piece-of-shit war buddy of Johnny, but not of Jubal, named Bobby Suggs . That's pretty much all you need to know.

When Johnny Came Marching Home was deeply disappointing. That's because the first 275 pages of the book were thoroughly enjoyable, while the last 45 were predictable and trite. This was a complete letdown. I'm all for an anticlimactic ending, but this one just didn't sit well.

Heffernan's at his best during the war part of the narrative. I have never been much of a fan of historical fiction, but the genre works because of the perspective it brings to events, one rarely encountered in most historical scholarship. Through his use of unadorned language, Heffernan captures the casual violence of warfare, especially by having his protagonists on a reconnaissance unit, away from most of the carnage of that war. The boys end up in the thick of a few battles, but much of the story takes place in the countryside and in the camps -- which, as Heffernan describes, had plenty of carnage of their own.

The murder story was less interesting, serving only as a narrative tool allowing the author to explore the scars of war soldiers returned home with. Jubal and Johnny are both wounded men, the former having lost his arm in the war, the latter his conscience. Their efforts to restart a normal life are marred by memories of the war, particularly Johnny's role in their third friend Abel's death.

Though admirable for his attention to historical detail, Heffernan did little to develop the characters, who for the most part remain types: Abel the naive kid, Johnny the budding thug, and Jubal the everyman narrator. A fourth friend, Josiah the African-American, is pretty much just that. I'm usually not too big on character development, but a book of this scope seemed to call for it.

Again, the shallow characters didn't bother me until the book's last chapters. But the ending was simply disappointing, none of the payoff that Heffernan promised throughout the book. I can see why he chose to simply let the book end in such way. After all, life isn't that complicated, stories rarely end with a twist. On the other hand, I wanted this book to end well so this review would be easier to write.

Bonuses: +1 for historical detail (including dialect)

Penalties: -2 for letting me down at the end