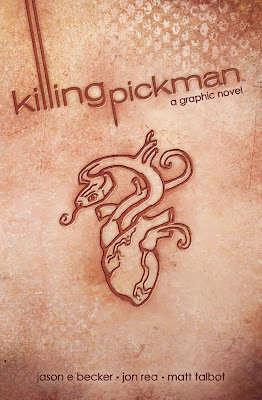 Killing Pickman by Jason Becker and Jon Rea is a mean comic with little redeeming value. So I read it twice.

The story opens homicide with detective William Zhu arresting child murderer Richard Pickman, at whose home scores of children have been murdered in satanic rites. The problem is that these worked, giving Pickman the power to fuck with people’s heads, driving them to enthusiastically murder one another and create general chaos. So, naturally, Detective Zhu has to kill him. Which turns out to be pretty difficult. Given the satanic rights and all. 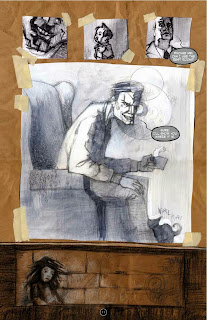 In a very pleasing way, Becker and Rea’s book reminded me of some of the great late eighties and early nineties horror comics, as if Jaime Delano’s run on Hellblazer took place in the pages of Taboo. Their story is relatively stripped down and relentlessly paced. There are few reveals, few buildups. Just weirdness and violence for 140 pages. Granted, there was nothing terribly original about the story—see the late eighties/early nineties reference above. But it was a thoroughly enjoyable read. On the train, or the bus.

Jon Rea’s art contributed significantly to the British horror comic feel ofthe book, evoking Dave McKean (the found art quality to Rea’s pages) and Bill Sienkiewicz (chaotic, shakily penciled figures), which actually worked really well, giving the book a general creepy, sometimes unsettling, tone. Rea’s work is very impressive from a design perspective. However, his paneling was less than precise from a narrative standpoint, particularly in the violent scenes—of which there were plenty.

Becker and Rea wisely chose to emphasize eeriness and mood over blood and gore. The subject matter could have served as an excuse for unnecessary gore. (Of course, Pickman murders children, so no-gore was a foregone conclusion. But he could have murdered adults.) The supernatural aspect of the story was handled subtly. That is, it wasn’t over-explained, just some demons and such. The cop story was ironically clichéd, but then again cop stories are ironically clichéd about half the time. An excuse for the arrest, trial, and imprisonment of Pickman. And the killing.

So I read it twice. As should you.

Penalties -1 for not knowing who got shot