Scalzi, The Human Division Episode 3: We Only Need the Heads

In case you missed the first two reviews in this series, I thought The B-Team (episode 1) was awesome, and that it was pretty much everything a "pilot" should be. Walk the Plank (episode 2) was entertaining, but it was a bit of a let-down nonetheless. It established a couple major plot points but its experimental, teleplay-style form meant that it didn't quite work so well as a standalone episode. What's more, the absence of any of our central characters struck me as strange. Science fiction TV shows sometimes have non-sequiter episodes, for example when the security chief of a space station located in the midst of a burgeoning civil war takes some time off the impending crisis to solve a murder mystery and drink a bunch of space whiskey. But it's rare for a science fiction TV show to completely abandon the credited cast to focus on another group of humans altogether, and even rarer to see it happen immediately after the pilot. 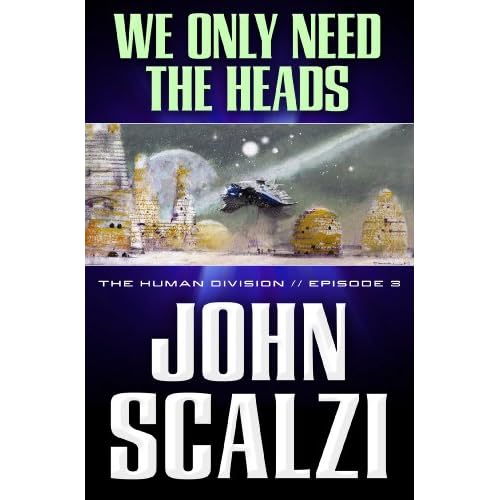 We Only Need the Heads puts us back in touch with Harry Wilson, Hart Schmidt, Ambassador Abumwe and the rest. Abumwe has been given another assignment, this time to settle some outstanding trade and tourism issues as part of a broader peace deal between the Colonial Union and the Bula, a tough-nut alien species that has occasionally mixed it up with the Colonial Defense Forces. Seems pretty laid-back, right? Wrong. Unfortunately for Abumwe, some idiot humans have set up a wildcat colony on a planet claimed by the Bula and recognized as Bula territory by the big and scary alien consortium known as the Conclave.

The wildcat colony in question, as it happens, is the one we visited in Walk the Plank. CDF sends a ship to deal with it, and hopefully get the colonists off world before the Bula find out they are there. And Harry Wilson has been sent along in an advisory capacity (exactly why isn't explained). When the mission gets there, though, they find something something terrible, which could put the whole Colonial Union in a bit of a sticky situation...

So How Was It?

After the jarring interlude that was Walk the Plank, I'm happy to say that We Only Need the Heads works as a fully-formed follow-up to The B-Team. It's a well-paced and exciting episode, with engaging characters acting, for the most part, in believable ways. And, of course, the pages are positively dripping with the sarcasm and dark humor that made the Old Man's War books such a big deal in SF. That's generally a good thing, but as I observed with The B-Team, there's an occasional overabundance of smirk and snark. For example:

Wilson wandered toward the officers mess to get a cup of coffee. As he did so, he pinged his BrainPal's message queue and found there was a message there from Hart Schmidt. Wilson smiled and prepared for a delightful dose of Schmidt's special brand of wan neuroticism.

Wilson turned away from Lee and Jefferson's truly compelling discussion and wandered further into the hut.


I get what Scalzi is going for here, but let's be frank: no one thinks in these kinds of terms. Cynicism is a state of mind, and thus can take place internally, but sarcasm is a fundamentally performative act. To put it another way, it's not something you think, it's something you say, and doesn't make sense outside the context of social interaction.

And, for that matter, when was the last time you saw an email or facebook post and thought "ah, here's a delightful dose of this person's special brand of wan neuroticism?" It might seem nit-picky to fixate on a couple errant sentences, but these moments of overwriting can snap the bubble of suspended disbelief and catapult you back into a state of detachment from the text. (Now how's that for overwriting?) Thankfully, they are the exception rather than the rule, and for the most part Scalzi does a good job balancing seriousness and humor. I do wish he'd dial back a bit from time to time, though.

The second issue I had with We Only Need the Heads is more structural to the plotting of the episode. I apologize in advance if I get overly cryptic here, but Scalzi has strong opinions on spoilers, and I respect that--even if it does make my job a bit harder to do. So if you are very spoiler-sensitive, please skip past the colored text.

So Abumwe needs to drag out her negotiations with the Bula so Wilson and the CDF crew have enough time to extract the colonists and destroy evidence of the wildcat colony. Only, the CDF has withheld vital information about the colony from both the diplomats and the cleanup crew. Now, I understand that military complexes are inherently secretive--at times to a fault. I also understand that command does not entail competence. But withholding this information, at least from the soldiers tasked with dismantling the colony, pretty much ensures that the only way they could do their job effectively would be if they stumbled into that information by chance, which is exactly what happens. Maybe this will make more sense later on, but right now it looks suspiciously like a plot hole.

I'm willing to give Scalzi the benefit of the doubt on this for the time being, and it bears repeating that We Only Need the Heads is a well-crafted and gripping episode that left me itching to push further into the book. Must...resist...tempation!

[Given that I'm doing one of these/chapter, I'm dispensing with the usual bonuses and penalties.]