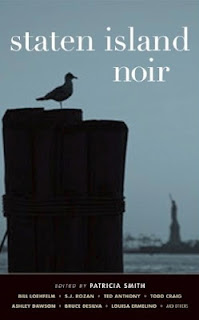 Allow me to cover my ass at the outset: I have never been to State Island. In fact, I can’t imagine any reason why I would ever in my life visit the place. But like all of New York, I know something about it without actually knowing the place. And from what I can tell, it’s a bit like the Valley, maybe even like my hometown Bakersfield. It’s beyond the city proper, unaffected by the speed and schemes of urban life, a few years’ behind—maybe a decade. It’s a world apart. Seemingly desolate and probably so. And apparently it’s a pretty crappy place to be a crook.

Staten Island Noir, part of Akashic Books’ Noir series, is a rather enjoyable anthology of crime fiction set in…you know where. I am not a huge fan of anthologies. I prefer collections of works by a single author. Risk is minimized, you have an idea from the first few stories whether or not the rest are worth reading. But an anthology is rife with danger. Let’s say I hate the first three stories. How do I know that the rest won’t suck?

Fortunately, State Island Noir didn’t suck. In fact, I enjoyed nearly every entry. This isn’t necessarily a ringing endorsement: I may have liked the collection due largely to lowered expectations. And though I found it highly readable, roughly half of the stories were not exactly memorable.

There were, however, some real gems in this collection that deserve mention. My personal favorite was Binnie Kirshenbaum’s “Assistant Professor Lodge,” not merely for its academic setting—it is a wonderfully subtle murder story with the best ending of any story in the collection—but I liked mainly it because of its academic setting. In “…spy verse spy..”, Todd Craig creates a very Wire-esque urban backdrop for his wonderfully constructed old-hood-seeking-revenge tale. Linda Nieves-Powell gets the unsettling award for her nuanced treatment of love, race, and murder in “The Fly-Ass Puerto Rican Girl from the Stapleton Projects.” And Ted Anthony’s entry about an incompetent hitman, “A User’s Guide to Keeping Your Kills Fresh,” and Ashley Dotson’s punk rock Nancy Drew story, “Teenage Wasteland” are both dark comedic tales centering on the Fresh Kills dump—the only Staten Island landmark that I remember after reading through the book. Which leads me to a criticism...

The anthology’s only real failing is that it left me with little impression of what Staten Island is like. In other words, many of these stories could have taken place in the San Fernando Valley and, other than more time spent in cars, little would have changed. Perhaps the themes the collection does evoke—marginality, isolation, desperation—are not specific to Staten Island per se but rather shared by suburbs and outskirts throughout the country.

Or maybe it’s because I know nothing about Staten Island.

One final quibble—and it’s not altogether insignificant, though it may be a touch petty. I don’t understand why Eddie Joyce’s “Before it Hardens” was included in this volume. While it isn’t a bad story—and I actually identified with the summertime travails of our teenage protagonist—there’s no crime. I kept waiting for someone to get killed. When no one did, I was sorely disappointed.

Let us not end with a complaint. Instead, we’ll praise Staten Island Noir for its diversity. The stories in this collection are told from a broad range of perspectives, in terms of race and of gender in particular. Noir is too often a white man’s world.

Penalties: -1 for the non-crime entry; -1 because I don't think I learned anything about Staten Island