Microreview [crime fiction]: The Seduction of the Innocent 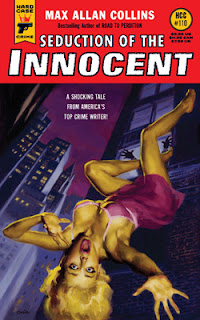 Apparently Max Allan Collins has been reading my dream journal again. A crime novel set in the shady comic publishing world of the fifties? Mobsters, beatniks, and two kinds of sexy nerds? Yes, I am interested.

Well, he didn’t get it exactly right: the love interest was a blonde, not a brunette.

Seduction of Innocent shares a certain quality with the paperback trash that it emulates: this is a novel to be enjoyed, quickly and preferably thoughtlessly. This isn’t Crime and Punishment, but then again I can’t ever get passed the old lady’s killing. So in that way Seduction of the Innocent is the exact opposite of an important piece of literature: I actually read and genuinely enjoyed it.

Seduction of the Innocent is marked by careful plotting, sharp dialog, and a mastery of genre conventions -- even clichés and well-worn tropes are expertly wielded. Though the characters are hardly original, they’re engaging and appealing. Sometimes they're even funny.

But then there’s the book’s denouement. Seduction of the Innocent is more roman de clef than roman noir. Though my tastes tend toward the hardboiled, I can appreciate a good murder mystery. Well, I have. But the mystery at the center of Seduction of the Innocent was not all that mysterious. I had it figured 75 pages before the denouement -- and I’m not the most attentive reader. Collins didn’t necessarily drop the ball. He simply used a rather contrived scenario to unmask the book’s murderer -- which was in stark contrast to Collins subtle manipulation of conventions throughout the novel.

Mention must be made of Terry Beatty's art. On it's own, it's good. As it's used in the book, it's good. I also just really like it when books have pictures.

Despite the criticisms leveled avove, I would recommend Seduction of the Innocent to fans of crime fiction, comic book history-lovers, and people who like to read books that entertain. If this doesn’t sound like you, why are you visiting this site? Oh...for the sci-fi.

Penalties: -1 for a disappointing ending; -1 for genre cliches (though they're used well)