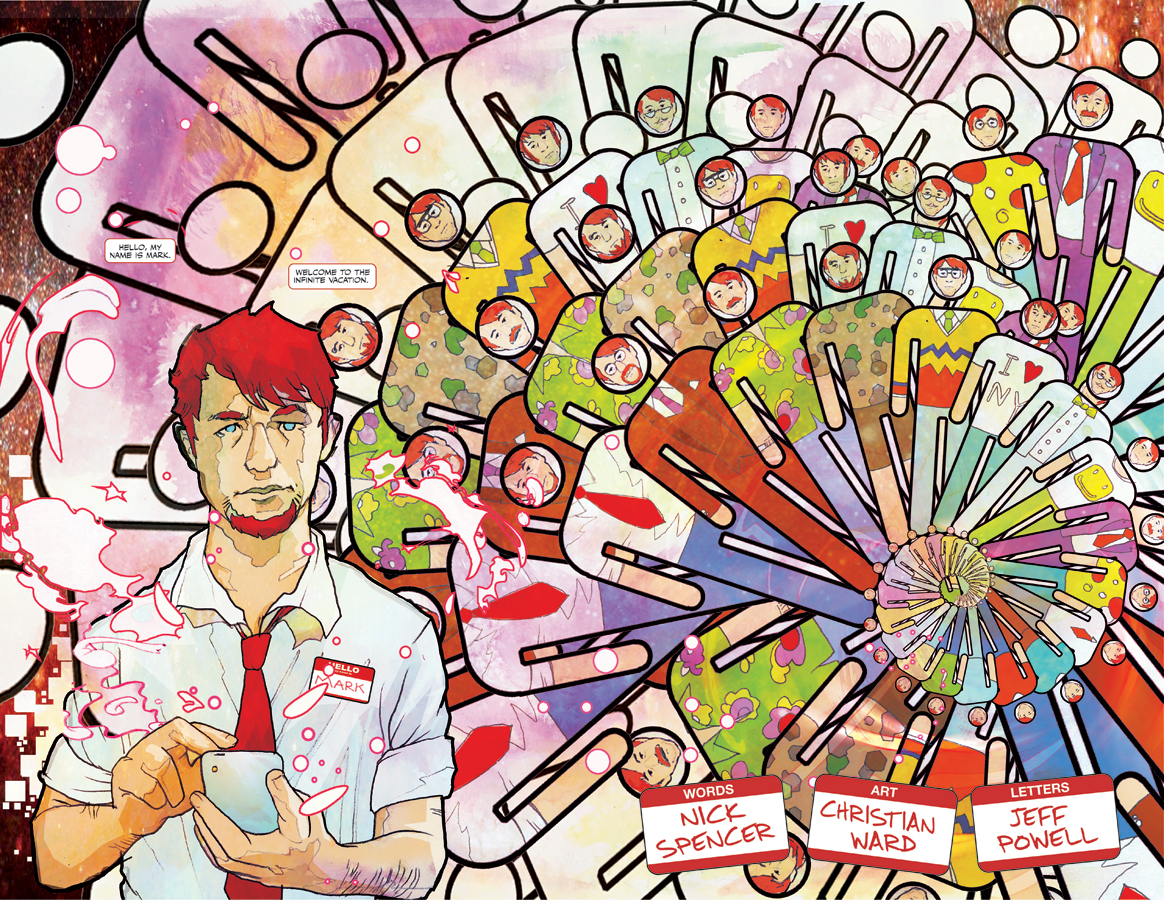 A journey that began in May of 2011 is coming to its conclusion this week.  When I picked up Infinite Vacation at my local comic shop I had no idea what I was getting into.  It had an employee recommendation tag on it and was written by Nick Spencer, who I knew from his work on Morning Glories.  What I found was a book filled with twists and turns that left me salivating for the next issue.  The trouble was that there was no regularity to which the books were released.  It wasn't until early 2012 that we got issue #4.  While frustrating, the book remained fresh and took darker and more twisted turns with each turn of the page.  Upon hearing the news that the series would be concluding with issue #5 (64 pages!) this week, it felt appropriate to revisit this title again.  I am so happy I did.

The book centers around the Infinite Vacation corporation that has software that allows users can trade, buy, and sell their way through limitless alternate iterations of themselves.  Were you always curious what would happen if you dropped out of college to pursue your music career?  For $4,500 you can.  Want to see what life would be like if you didn't break up with your high school sweetheart?  With Infinite Vacation that power is on your mobile device or home computer.  Utilizing the probability engine, the fine folk at Infinite Vacation allow you to experience your wildest fantasy (and if you know anything about the twisted mind of Nick Spencer, i.e. Bedlam, there are some strange alternatives).

Our protagonist, Mark, visits an average of 9 alternate versions of his life per day, yet always ends up bored, alone, and in a dead end job.  No matter how hard he tries to find the perfect life things don't ever seem to work out.  On top of that, he recently attended the funeral for one of his alternative selfs and there seems to be a trend of them dying lately. His worries over his impending death are lost when he spys an attractive lady at the coffee shop who appears to be flirting with him.

Mark, of course, blows this opportunity and learns that she was interested, but knowing that he vacations frequently, she is not interested.  Turns out she is a deadender, a religious group that does not condone the idea of traveling across the multiverse.

As he sits at home and ponders this lost girl, another version of himself bursts in upset accusing him of murdering himself.

Without getting into spoilers, because you should pick up and read issues #1-4 before Wednesday, we learn that the Infinite Vacation people are out to kill our version of Mark.  We meet redneck Mark, who would have existed if his dad got custody of him, nudist Mark, and hacker Mark who team up to help our Mark uncover why they are after him.

Claire, the girl from the coffee shop, plays a significant role as the unlikely duo attempt to take down Infinite Vacation.  The good folk of Infinite Vacation are not above boxing universes (collapsing them and killing everyone inside), in order to stop Mark.  Infinite Vacation also unleashes the terror that is canibal Mark into multiple universes.  Safe to say that I will have a difficult time forgetting some of the terrible exploits and quotes from this fiendish character.

In 64 glorious pages this Wednesday we will learn what our Mark has planned to save the girl and save the day. 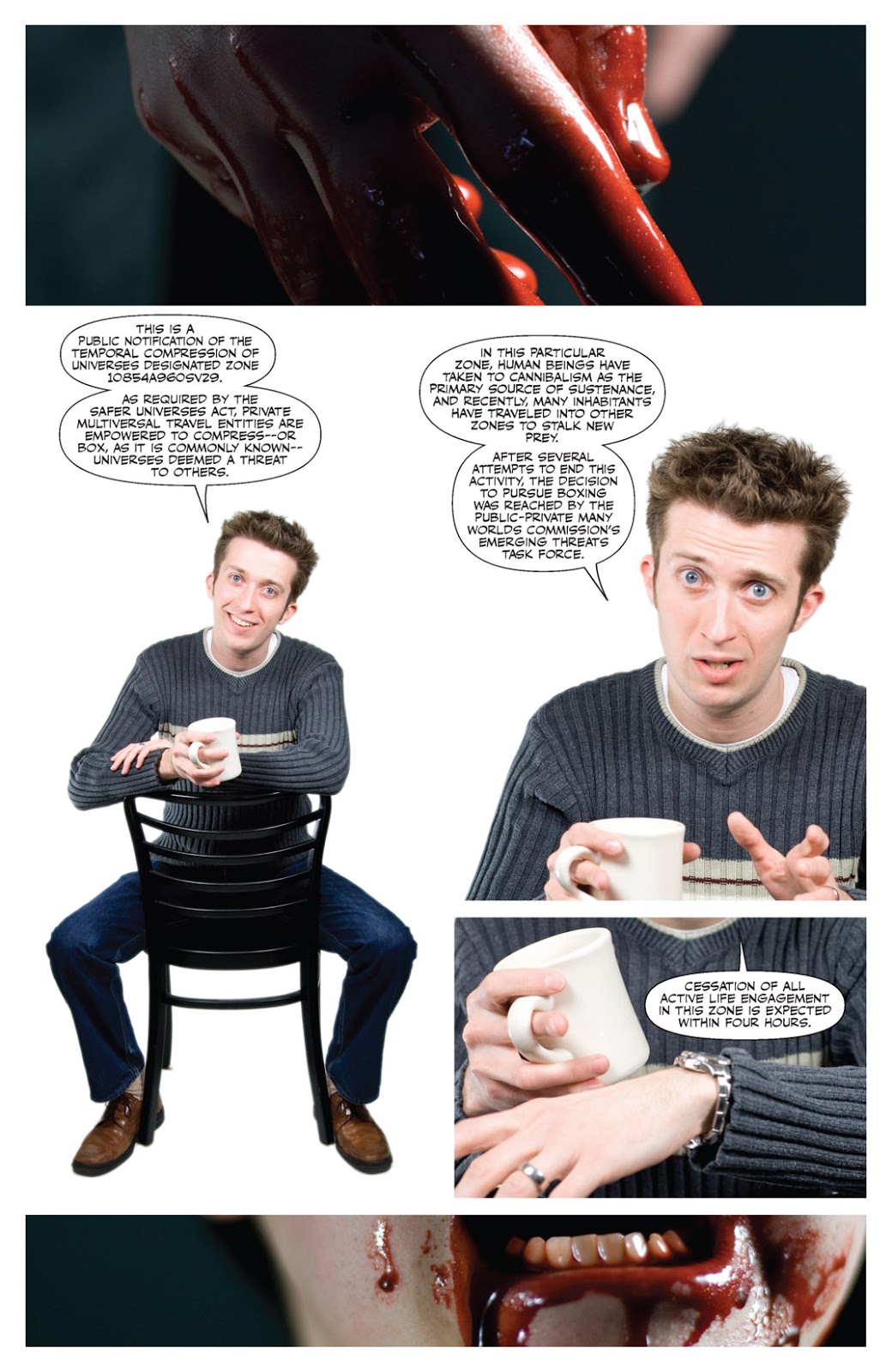 Christian Ward provides the art for this comic and his range of styles well fits the book.  Some scenes are elaborately detailed, close-ups of characters face either evoke a connection with the reader or instill terror, and you are constantly turning the book upside down and sideways to mimic the movement one must feel crossing the multiverse.  Ward's art greatly enhances this book and elevates the insane world in which we are engrossed.  It may have taken 2 years for this five-issue story to reach its conclusion, but after revisiting issues #1-4, it appears to have been worth the wait.  While I would have preferred an app that allowed me to travel to an alternative universe where the books came out quicker, I am very excited to crack open the book on Wednesday and read the conclusion to this phenomenal story.  Spencer also tweeted that you should pick up the physical copy if possible, because there are some effects that involve turning pages and what-not that will work better with a physical comic.  Happy reading! 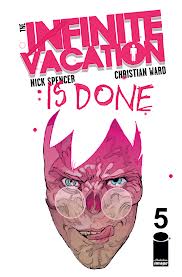