If you haven't checked out Phoebe's Watchmen Wednesdays you are really missing out on the best recap that is gracing the internet.  I had very low expectations for this series, but checked it out after all of the buzz surrounding the first episode and have been blown away. 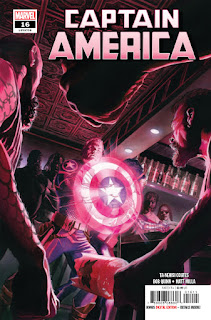 Pick of the Week:
Captain America #16:
Captain America is my favorite superhero thanks to Ed Brubaker's amazing run many years ago and since then the series has had some highs and lows.  I am not sure what caused me to revisit this series as of recent, but I am glad that I decided to hop back on. Ta-Nehisi Coates and Bob Quinn's current run has a Civil War-esque feel to it as Captain America is a wanted man.  The big difference is that he can count the number of allies he has on his hands.

After being framed as a Hydra agent and a cop killer, Captain America is attempting to clear his name and while still protecting the city. This involves tracking down a cop killer named Scourge and it brings Captain America face-to-face with an old friend who is understandably upset about meeting his old mentor.

U.S. Agent, who has served as Captain America in the past, sets a trap for Captain America and the Daughters of Liberty.  While the trap is unsuccessful, it allows Cap the opportunity to sow some seeds of doubt in the story of him as a cop killer. The tension between old friends and the fact that Captain America was able to plant a seed of truth in the mind of who could be a valuable ally offers a glimmer of hope.

The twist at the end was a bit disappointing in that there is no way that it is true.  I understand that the news would be shocking to Cap and the Daughters of Liberty when they see it, but there is clearly a simple explanation for what went down with Fisk.

The Rest of the Pull List:
I was initially excited for He-Man and the Masters of the Multiverse, but had a hard time getting into a multiverse approach to Eternia.  While the art is definitely appropriate given the source material, it reminds me too much of the dark days of the super-muscle 90's.  I am not sure if issue #2 will make the pull list, but MOTU pulls hard on the nostalgia strings. Star Wars continues its solid run if the Mandalorian is not filling your Star Wars needs pre Rise of Skywalker.