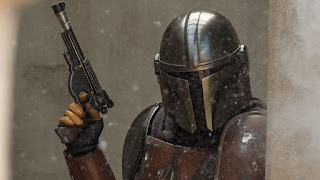 What, at its heart, is Star Wars? In 2019, that is not an easy question to answer. There has been nearly endless media dedicated to it - books, comics/graphic novels, video games, TV shows and, ya know, movies. But what make Star Wars Star Wars, instead of.... not?

Personally, I think a huge thing that when Star Wars gets it right, it gets it very right, is that it doesn't take itself too seriously. The prequels messed this up, badly. They were Very Serious About Themselves, and they are garbage. Star Wars is about space wizards in the future-past, and sometimes it's silly, sometimes it's fun, but when it says "hey, I am more than I am", it stops working.

But then... it's also more than the sum of its parts.

Going back to its roots, back in the actual New Hope days, that is what Star Wars is. Even amidst galactic conflict and high stakes, there is silliness and, well, life.

All of this is to say that The Mandalorian is Star Wars. There are tons of moments that make you laugh - even at its most tense. The stakes don't seem high, at least until the end of the first episode, even for our helmeted protagonist. In my semi-humble opinion, that is where stories are the best - we know the Mandalorian himself will survive, but what will that cost?

When he discovers the Yodling (not Baby Yoda, Yodling), that is a "I am your father" level twist. But it is a twist that can go any way. He could let IG-11 just end it, and then the story goes on in a different direction. Just like a bounty hunter, allowing the fate of the universe to play out without much regard for it... except our hero, such as he is, ends IG-11 instead.

That, my friends, is a pretty monumental moment! It tells us so much about him, about the universe, and what we are in for, but along the way... so many silly moments.

I have written before about heart being an essential element of story. The Original Trilogy is a pretty straightforward good v evil story, the plucky rebels, armed only with justice and the strength of their courage against the evil empire, that is... well, evil. They blow up planets 'n stuff. But within that is a lot of heart. Han Solo finds his heart, Leia is an inspiring leader, Luke sucks, etc.

The Mandalorian is... not that. It is an exploration that can only exist because of the cultural touchstone Star Wars has become. There are a billion good v evil stories out there that we don't wonder what the grey areas look like. They are popcorn movies/shows/books which we consume, enjoy, and then move on with our lives. Star Wars is part of our lives, and part of our culture, so at a certain point we start go "wait... life isn't like that."

So The Mandalorian - like other recent Star Wars media, most notably Rogue One - dives into those grey areas. But what it managed to do was keep the heart of Star Wars - human moments, funny moments that underscore the actual stakes at hand.

The best example of this is in the moments after the firefight at the end of the first episode. Our hero and IG-11 have a door they need to get through, and a big gun to get through it with. The simultaneous realization and turn to the gun is a great, funny moment.

But a few seconds later, we have a critical moment, as they discover their quarry is a Yodaling (which is a way better name than Baby Yoda, make it happen). Here's where I really felt like this show nailed it: We didn't know what was going to happen. We had a pretty good guess, but it wasn't 100% certain that he was going to save the Yodaling.

We still don't know where, exactly, the show will go, or its impact on the Star Wars universe, but the early results are promising, and it looks to be full of heart (and cuteness).

-DESR
Dean is the author of the 3024AD series of science fiction stories (which should be on YOUR summer reading list). You can read his other ramblings and musings on a variety of topics (mostly writing) on his blog. When not holed up in his office  writing, he can be found watching or playing sports, or in his natural habitat of a bookstore.
Posted by Dean E.S. Richard at 12:00:00 PM