The adventures of the White Raven crew come to an end... 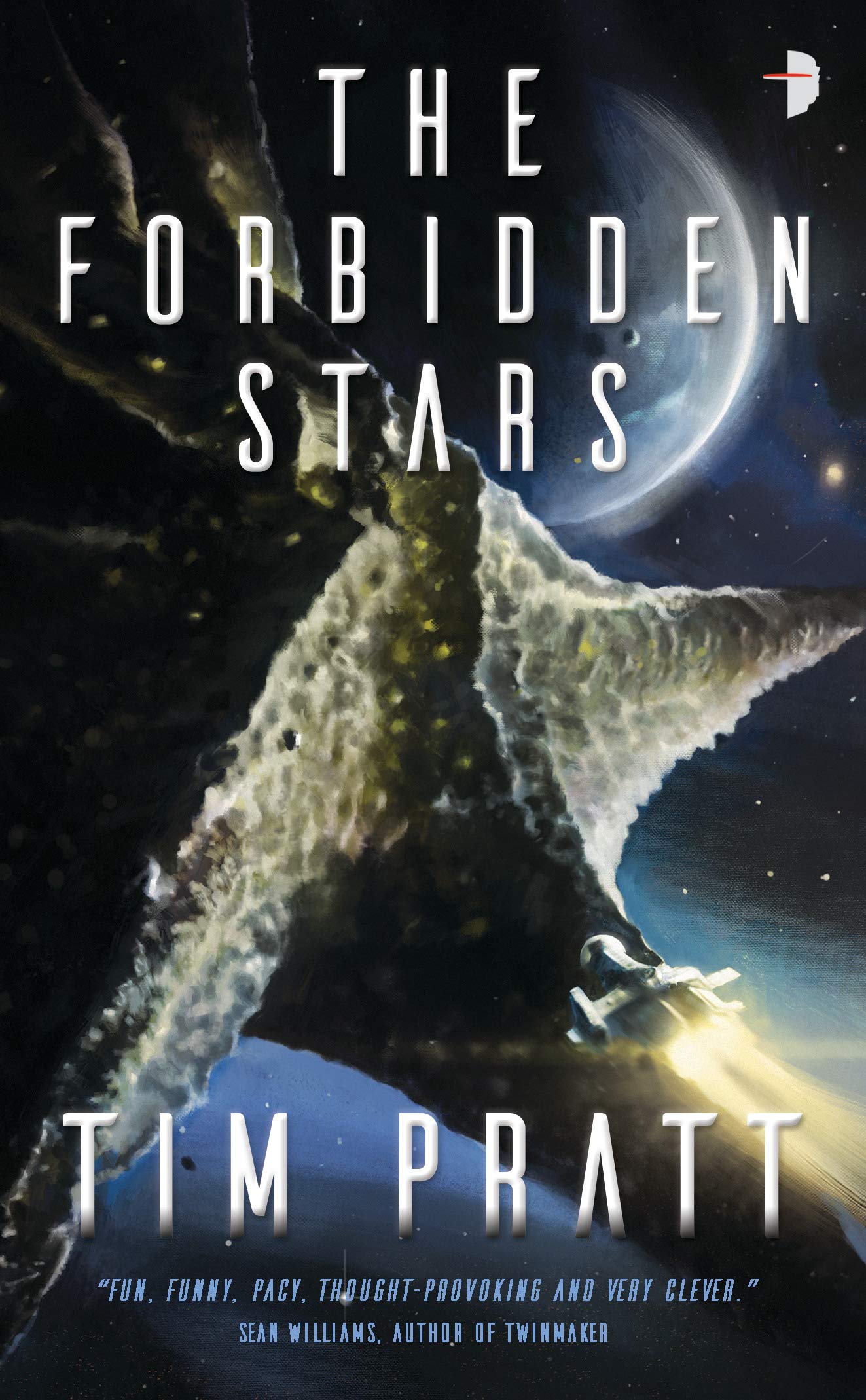 The Forbidden Stars is third in Tim Pratt's Axiom series, which began with The Wrong Stars back in 2017. If you're interested in the series of a whole and only want one book worth of spoilers, you may be interested in my review of the second book, The Dreaming Stars, which also includes a summary of what to expect from the first book if you add it to your TBR. In that review, I expressed a wish for the Axiom to be one of those neverending speculative series, where everything feels like a pivotal TV episode with its own satisfying wrap-ups as well as a contribution to a wider, slow moving plot arc. Alas, The Forbidden Stars confirms that the White Raven's adventures are ending at the trilogy point, and this is therefore the climax of their story.

All the core characters from the book 1 are back: Captain Callie Machado and her ancient (in the sense of cryogenic freezing, anyway) girlfriend Elena; Ashok the amiable if slightly emotionally unintelligent cyborg; Drake and Janice, survivors of what should have been a fatal crash and a subsequent phsyical rebuild by aliens without a proper blueprint for what humans should look like; and Shall, the ship's AI. Also on the mission is Lantern, member of the alien race called the Liars which originally gifted humanity the stars in a limited form, in order to prevent them from stumbling across the secrets of the Axiom. As it transpires, the galaxy that humans have come of age in is a galaxy that's controlled by a genocidal, warlike species convinced of its own superiority - that's the Axiom themselves - and while most members of the species are now in hibernation or otherwise out of action while they wait for some of their pet projects to come to fruition, they're not going to be happy that their place has become infested with another (vaguely) successful spacefaring species while they've been away. Though its fun to get back to the core cast, I missed some of the previous characters, and there's not really anyone new to love - the new robot pal Kaustikos, sent to join the crew by their mysterious Benefactor, has some fun moments but is mostly engaged in unsympathetic whining, and there's not a lot of time for any of the in-system characters to really shine.

The action here takes place in the Vanir System, which was initially one of the twenty-nine opened by the Liars but which closed a century ago under mysterious circumstances. With a ship that just so happens to have the only free gate-creation technology in human hands, the White Raven crew go to investigate, discovering an oppressive system controlled by a faction of Liars still loyal to the Axiom who are using the human population of the system for increasingly unpleasant biological experiments. The crew, understandably, take issue with this, and there's a series of sequences in which they (well, mostly Callie and Shall, with the others pitching in from behind the front lines) take down various facilities and bases controlled by the system's elite, while trying to figure out the aims of the system's authorities and how the Axiom themselves fit in to the whole thing.

Compared to The Dreaming Stars, this is definitely a more action packed book, though while most of the characters - aside from Elena, who spends a lot of time in the background or having pre-sex conversations with Callie - get a moment to shine. In particular, the resolution of Janice and Drake's arc, while a little out of the blue, is a really lovely payoff for this pair of hard-done-by characters. The action veers towards the formulaic at times - find an Axiom base to target, Callie and a version of Shall go and kick butt, maybe some other people and/or robots help, they find the base leader and tell them off for doing all the crimes, get more information out of them and then give them their comeuppance, and then move on to the next liberation. Its a formula that's a bit prone to "this setback that a character is experiencing turns out to just be a misunderstanding that is resolved in the audience's mind by a POV shift next chapter", but the action itself is well crafted and Callie is a brilliant character to spend more time with, making up for the lack of similarly cool stuff for her girlfriend to do.

With so many action sequences to pack in, an entire system to liberate, and the overall arc with the Axiom to tie up, it's almost inevitable that the ending of The Forbidden Stars gets a bit rushed. There's nothing particularly unsatisfying about the events that transpire, but once things kicked off for the finale I found myself looking sceptically at the number of pages I had left to go, and one character in particular gets the short end of the stick when it comes to revealing their ending. It also relies on the audience accepting, after a trilogy which has followed one very individualistic crew, that actually these world-ending alien things are best handled by the authorities - a realisation which feels both very sensible and kind of lame. Those elements aside, it does mostly pull off what it needs to do to offer a narrative closure for the White Raven crew even in a galaxy that is, after all, still full of an enormous, unknowable threat to humanity, and there's a nice epilogue-like sequence that basically gets the entire band back together to see off the trilogy.

This is perhaps a pickier review than it needs to be, for a book and a series that I immensely enjoyed and which I was sorry to see end. For all the small ways I'd have liked to see this series evolve, this has been one of the best recent series for combining consistently fun space action with light-touch but ever-present threats of the unknown, and of humanity's position in the face of it - and putting diverse, queer characters at the heart of it all. If Pratt were ever to revisit this galaxy I'd most certainly be in line for more action in the world of the Axiom, and I definitely recommend anyone who hasn't already to get acquainted with Callie, Elena and the crew of the White Raven.

Penalties: -1 An ending that feels too rushed for the trilogy.