I am going to mix things up a bit for today's entry in an attempt to try something new here on Thursday Morning Superhero.  My write-up/review will focus on what I consider one of the bigger books for the week followed with other brief recommendations. If you have any thoughts on it leave a comment below or tweet at me (@newhousebailey). 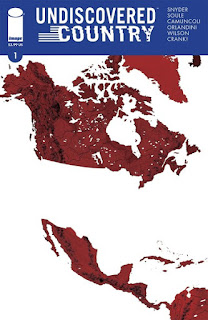 Undiscovered Country 1:
Set in 2059, the book opens with a crew on a helicopter entering US airspace for the first time in 30 years.  A plague called the Sky Virus threatens life as we know it in the US and there is a possible cure somewhere within its border walls.  The bigger question is how did we reach a point where the US has cut itself off from the world?

When you rack up as much debt as the US has, things tend to get difficult when your creditor wants you to pay up.  In 2021 China called on the US to pay back its debt and it triggered what would eventually be called "The Sealing".  This lengthy process ended with a massive wall surrounding the US and "Air Wall" technology that was developed by DARPA and is some sort of electric barrier that is invisible to the naked eye.

Given this history it is understandable that there was a lot of tension as this team embarked into uncharted territory and as this story progressed the crew had no idea what they would find within the walls of the US.  It certainly caught me by surprise and I am looking forward to learning more about the competing factions, the interesting creatures that have appeared, and who is really behind the message the recruited this team from the outside world.

This book arrived on my pull list with a lot of hype, but given the A-list talent that is collaborating on this book it isn't surprising and might not be fair.  Co-authors Scott Snyder and Charles Soule have been blowing up my Twitter feed promoting this book and the duo of Ciuseppe Camuncoli and Daniele Orlandini absolutely crushed the visuals. Round that out with colors by Matt Wilson and lettering by Crank! and it is not surprising this was released with much fanfare and 1,325 variants.

I am really happy that this lived up to the hype and promises to be an interesting take on what our future might look like.  Sadly given our current political climate it seems all too realistic.

The rest of the pull list:
My pull list featured six books this week and sadly saw me not pull the trigger on Doctor Aphra despite my excitement towards the new arc.  The new Locke and Key was the first book I read this week, and while extremely enjoyable, it was more of a tease setting up the big event for later this year. It was a cute one-shot with a very good doggie. While a bit darker than I expected, I was pleasantly surprised with the new Yondu book from Zac Thompson and Lonnie Nadler. I continue to enjoy the current Daredevil arc and Gerry Duggan's Dead Eyes.  If you pick up one title this week outside of Undiscovered Country, you can't go wrong with No One Left to Fight by Aubrey Sitterson. It features the best looking pages and colors on the stands this week from Fico Ossio and Raciel Avila.  It is really one of the best looking comics I have ever seen from a color standpoint which is not something I say often.