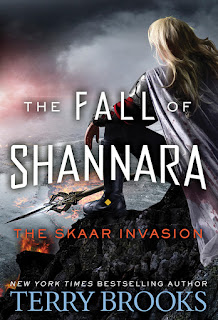 
Following The Black Elfstone, The Skaar Invasion is the second book of the epic four-part conclusion to the Shannara series from one of the acknowledged masters of the fantasy genre.

The Four Lands are under siege. Wielding a magical ability virtually impossible to combat, mysterious invaders defeat the most fearsome Troll armies, then focus their savagery on the Druid order—and all hope seems lost.

Eventually the invaders reveal a more human face, but understanding their motives in no way mitigates the brutality of their actions. Dar Leah, once the High Druid’s Blade, has crossed paths—and swords—with their ruthless leader before. So he knows that if any hope exists, it rests in the hands of the Druid Drisker Arc, now trapped inside vanished Paranor.

As Drisker races to find the ancient knowledge that could free him, Dar goes in search of Tarsha Kaynin, the young woman blessed with the powerful gift of the wishsong, whose magic could draw Drisker back into the world of the living. But little do they know that what appeared to be a formidable invading force may only be the forerunner of a much larger army—one intent on nothing less than total conquest.

Why We Want It: The Sword of Shannara was one of the earliest fantasy novels I read and, at this point, I've been reading Shannara for more than twenty five years. Once I thought Shannara was near the pinnacle of epic fantasy. I don't feel quite the same way any more, but Terry Brooks is on his final push to end the series after more than 30 novels. Recent volumes have seen Shannara at a lower point in terms of quality, but last year's The Black Elfstone was - if not a return to a form Brooks hasn't reached since the Heritage series he published in the early 90's - a strong step back in the right direction and a highly entertaining and engaging volume. 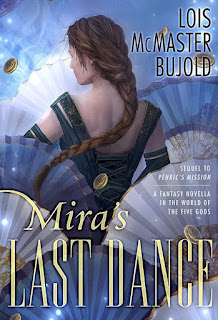 
In this sequel to the novella Penric’s Mission, the injured Penric, a Temple sorcerer and learned divine, tries to guide the betrayed General Arisaydia and his widowed sister Nikys across the last hundred miles of hostile Cedonia to safety in the Duchy of Orbas. In the town of Sosie the fugitive party encounters unexpected delays, and even more unexpected opportunities and hazards, as the courtesan Mira of Adria, one of the ten dead women whose imprints make up the personality of the chaos demon Desdemona, comes to the fore with her own special expertise.

Why We Want It: Reading Bujold is a constant delight and each one of the Penric novellas have met the high bar Bujold sets for all of her work. Mira's Last Dance moves the timeline and the storyline further and it's probably the one I've been most excited to read thus far. As a side point, I'm reading The Curse of Chalion, which is the first novel Bujold wrote in her World of the Five Gods, which is the larger setting of the Penric novellas (and which is also a finalist for the Hugo Award for Best Series) - and that novel is exceptional and whets my appetite even more for Mira's Last Dance. 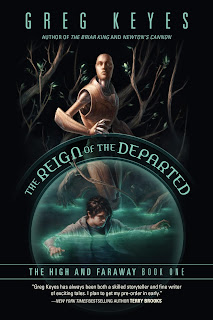 
A young man looking for death finds purpose in a world beyond our own in this sweeping fantasy from Greg Keyes (The Briar King, Newton’s Cannon).

Errol Greyson hadn’t intended to commit suicide. Or so he told himself. But waking up after his “cry for help” in the body of a wood-and-metal construct magically animated by Aster—the strange girl from school—was not a result he could have imagined.

Aster’s wild explanations of a quest to find the water of health that would cure her father seemed as unreal as her description of Errol’s own half-dead existence, his consciousness stuck in an enchanted automaton while his real body was in a coma from which it might never wake. And of course, they would need to recruit a girl—a virgin, no less—who had been dead for thirty years, to lead them through something called the Pale, beyond which a bunch of magical kingdoms existed. Plus, the threat that Aster could turn him off like a light switch, sending him into a hellish oblivion, was a convincing incentive to cooperate.

It all seemed quite mad: either Aster was nuts or Errol was hallucinating. But if it meant a new chance at life, he reckoned it was worth playing along.

Why We Want It: Greg Keyes wrote The Age of Unreason (historical fantasy featuring Ben Franklin) and Kingdoms of Thorn and Bone (epic fantasy) quartets and I loved them both, wished more people were talking about them, and was excited to see what he would do next. Keyes spent a number of years writing movie and video game tie-in fiction, which is fine - but I've been such a fan of his original world fiction that I'm excited to see what he's got for us with The Reign of the Departed. 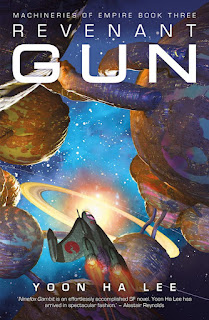 
Machineries Of Empire, the most exciting science fiction trilogy of the decade, reaches its astonishing conclusion!

When Shuos Jedao wakes up for the first time, several things go wrong. His few memories tell him that he's a seventeen-year-old cadet--but his body belongs to a man decades older. Hexarch Nirai Kujen orders Jedao to reconquer the fractured hexarchate on his behalf even though Jedao has no memory of ever being a soldier, let alone a general. Surely a knack for video games doesn't qualify you to take charge of an army?

Soon Jedao learns the situation is even worse. The Kel soldiers under his command may be compelled to obey him, but they hate him thanks to a massacre he can't remember committing. Kujen's friendliness can't hide the fact that he's a tyrant. And what's worse, Jedao and Kujen are being hunted by an enemy who knows more about Jedao and his crimes than he does himself...

Why We Want It: Straight up, I've loved both Ninefox Gambit and Raven Stratagem - so there was never a doubt I'd read Revenant Gun. Each book has been a surprise and a revelation, and I never would have anticipated a Shuos Jedao versus Shuos Jedao but now that I know it exists, I'm ready. 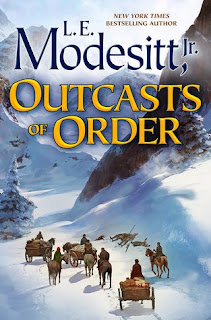 
Modesitt continues his bestselling Saga of Recluce with his 20th book in the long-running series. Beltur began his journey in The Mongrel Mage and continues with Outcasts of Order, the next book of his story arc in the Saga of Recluce.

Beltur, an Order mage, discovers he possesses frightening powers not seen for hundreds of years. With his new abilities, he survives the war in Elparta and saves the lives of all. However, victory comes with a price. His fellow mages now see him as a threat to be destroyed, and the local merchants want to exploit his power.

There’s only one way he can remain free and survive—he’s going to have to run.

Why We Want It: Recluce has been one of my most long running and consistent comfort reads. The Mongrel Mage was a solid outing and I'm looking forward to spending more time with Beltur. 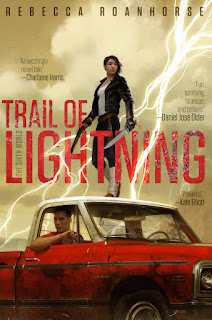 
While most of the world has drowned beneath the sudden rising waters of a climate apocalypse, Dinétah (formerly the Navajo reservation) has been reborn. The gods and heroes of legend walk the land, but so do monsters.

Maggie Hoskie is a Dinétah monster hunter, a supernaturally gifted killer. When a small town needs help finding a missing girl, Maggie is their last—and best—hope. But what Maggie uncovers about the monster is much larger and more terrifying than anything she could imagine.

Maggie reluctantly enlists the aid of Kai Arviso, an unconventional medicine man, and together they travel to the rez to unravel clues from ancient legends, trade favors with tricksters, and battle dark witchcraft in a patchwork world of deteriorating technology.

As Maggie discovers the truth behind the disappearances, she will have to confront her past—if she wants to survive.

Welcome to the Sixth World.

Why We Want It: Roanhorse burst on to the scene with her short story "Welcome to Your Authentic Indian Experience", which is a finalist for all the awards. But, Trail of Lightning really caught my attention. Apocalyptic Native American Fantasy. Roanhorse's elevator pitch was "Indigenous Mad Max: Fury Road". Of course I'm going to read this!