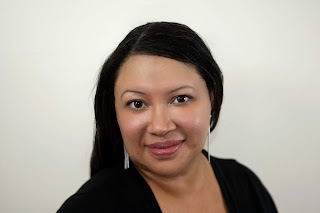 I am currently reading Witchmark by C.L. Polk. This book is likely the polar opposite of mine. It is set in an alternative world based on Edwardian England and there are bicycle chases and proper teas and a lot of painfully restrained desires. I am loving it all. The world and the characters are so richly drawn that I'm sucked in. It feels read and I keep forgetting that this is a secondary world only inspired by Edwardian England and not England itself, just with mages and witches and angel fey. There's also a murder mystery at the center of the book and a mysterious illness infecting veterans of a colonial war. I'm about halfway through and can't wait to get some time to finish it this weekend.

I am really excited for P. Djèlí Clark's The Black God's Drum. I mean, that cover alone was enough to get me to press the preorder button. But throw in an alternate New Orleans populated with Haitian pirates and airships and a girl who talks to orisha of wind and storms and I'm sold.

I have comfort reads that I often return to when I'm stressed or just need a break. They are the equivalent of a cozy blanket. One of those is The Black Jewels Trilogy by Anne Bishop. I've read it so many times, I probably should have it memorized by now. Warning: It's a dark book with a lot of sexual violence in a sexually violent society, so it might not be everyone's cup of tea but the story feels like a survivor's story to me in a lot of ways, and I am drawn to that.

There's probably a lot of books that I loved but likely didn't withstand the test of time. I was obsessed with the Dragonlance Chronicles as a teen but I'm afraid to go back and read them now. Fellow fans who loved them as kids and are now adults have warned me they didn't age well, so I shall keep them pure and perfect in my teen mind forever and won't be picking them up again. I may, however, recommend them to my 10 year old.

Probably all of them. My imagination is a sponge. But I would say the book that has stuck with me the most is Dune by Frank Herbert. I love everything about that book. I think I read it at just the right time in my formation for it to really help me imagine what can be done in the genre. I loved it then, and still do.


Trail of Lighting is my debut novel that drops June 26th. The elevator pitch was an Indigenous Mad Max: Fury Road. It's set in a post-apocalyptic future where most of the world has been lost, but the Navajo reservation, now known by its ancestral name, Dinétah, has been reborn. The gods and heroes of legend walk the land, but so do the monsters, and it's up to our protagonist, Maggie Hoskie, to fight the monsters both physical and metaphorical. I guess readers will have to decide if it's awesome or not, but certainly having a badass Navajo monsterhunter as your protagonist doesn't hurt. I mean, have you seen that cover?