The news out of San Diego is finally starting to pick up. SDCC is less than a month out and there are still a large number of moving pieces that organizers are sorting out. Rumors of online lotteries appear to be correct, but is not sure in what capacity.  More and more panels are hitting the schedule and the plan is to provide a 10 year old's take on what SDCC has to offer in future posts.  This week will focus on how the off site picture is developing. 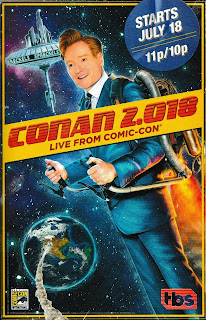 Conan:
This marks the fourth year that Conan will be taping his show at the Spreckles Theater in San Diego.  While that news is exciting in its own right, some eagle eyed fans noticed that one of the trolley wraps in San Diego made mention of the Conan House. Fans are hoping this means more Conan Bingo and I cannot wait to learn more about this endeavor.

Funko Fundays:
My son is going to have his mind blown when he experiences the madness and controlled chaos that is Funko Fundays. Words cannot describe this event, but you can see some great video of it over the years in Making Fun, the Funko documentary on Netflix or enjoy the video from last year's celebration. Tickets sold out within seconds and I look forward to sharing a special evening with my fellow collectors.  Now if we could just have a theme reveal. 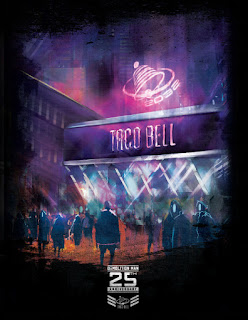 Taco Bell's Demolition Man Pop Up:
Nacho fries are on the table in this bizarre pop up celebrating the 25th anniversary of Demolition Man.  You had me at nacho fries.

Notable Comics:
While I don't think we needed a Charlie's Angels comic, I immediately was on board for the reboot when I heard the creative team of John Layman (of Chew fame) and Joe Eisma would be working together on this series. The debut issue came out this week and is delightful.  I sound like a broken record, but you really need to read Brian K Vaughan's and Fiona Staples' Saga.  Issue #53 this week and there are no signs of this book slowing down. There have been rumors of it making its way to the small or large screen and I am very curious how that adaptation would work.