Microreview [book]: A Study in Honor by Claire O'Dell

A Study in Honor is a white-hot reimagining of the Holmes and Watson story in a dark
twenty minutes into the future United States of America. 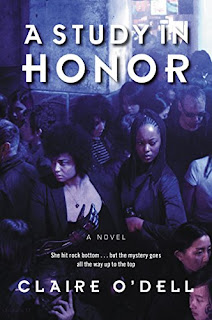 Dr. Watson is a disabled veteran from the war. With a substandard artificial arm, Dr. Watson wants
to try and return to medicine in Washington D.C, but that would require getting an artificial arm that
works. In the meantime, Watson is living a hand to mouth existence, trying to find a job,
find a place to live, and find a new path after the traumas of war. But Dr. Watson has some challenges in that regard. For you see, Dr. Watson is an
queer African American woman, Dr. Janet Watson. Dr. Watson’s discharge with a clunky
artificial arm is from a second American civil war, the heartland of the nation in the
hands of secessionists. For Janet, the war may be over, but it is far from over for the country.
And finally, a mutual acquaintance leads Janet to meet her new future roommate...the
African American Dr. Sara Holmes. And so a friendship is begun, just in time for
them to tackle a mystery regarding veterans of the civil war. And so we are introduced to the central character and the near-future world of Claire O’Dell’s
A Study in Honor. Sherlock Holmes stories not written by Doyle himself are nothing new. In fact, such works
have been around for over a century. J.M. Barrie, author of Peter Pan, wrote a Sherlock Holmes
pastiche “The Late Sherlock Holmes”, in 1893, a scant two years after Doyle’s first stories came
to print. The number of authors who have tried their hands at Sherlock Holmes stories is in the
hundreds. SFF writers are no stranger to writing Holmes stories, either, ranging from Neil
Gaiman to Michael Chabon to, recently, Aliette de Bodard. What does Claire O’Dell bring to a Holmes and Watson story, then? By putting it in a near
future US, a US which is riven by Civil War and social tensions, and by making both Holmes
and Watson African American women, the author brings a new and fresh perspective to the
mystery solving duo’s relationship, existence, and milieu to work in. Rather than being in a
rarefied pinnacle of social class and status as is common in most Holmes stories, this
Dr. Janet Watson is far more working class in her social mobility, outlook, and in her
day to day problems. Living on the edge as she does, the mystery of Holmes’s own wealth
and relative status gives Watson and Holmes a fractally complex relationship as Watson tries
to come to terms with her roommate’s nature. The Watson-Holmes relationship in any
Sherlock Holmes adaptation is rife with potential because of just how out of the box Holmes is.
Making her a African American woman like Watson diminishes the distance between them,
but her success, wealth, social status, and the mystery of her background distances her further.
Their relationship, in addition to the tight first person deep dive on Watson herself, is the strongest
part of the novel, and the real reason, I think, to read the novel. It would not be a Sherlock Holmes story without a mystery, and without Holmes and Watson
going off and trying to solve the mystery. Even in an age of computers and instant information
and databases, Holmes’ powers of deduction, and Watson’s determination, are still necessary
to unravel the central problem. Computers provide O’Dell’s Holmes with more information, but
it still takes Holmes’ powers to put the information together in the classic Holmesian manner and
come up with her deductions. The mystery at hand does tie into the ongoing Civil War, and into Watson’s own experiences
at the end of the Civil War itself. The mystery, while a fair one, though, is a pale shadow of the
other charms of the novel. I was enchanted and entranced by Janet’s story, and her
relationship with Holmes, and how all that unfolds, much more than the mystery the two
of them stumble into. This is a novel I read for character, much more than plot or even setting,
although the near future the author posits, from technology to social change and historical
change, is very well done. Based on the strength of her two characters and this world, I hope that there will be a sequel,
because I surely would enjoy reading much more about this Watson and this Holmes in this darkly
imagined near future world.

Bonuses : +1 for an amazingly strong central character, whose plight and story come across vividly
on the page. +1 for Watson and Holmes’ relationship, which blazes across the page

Penalties : -1 the central plot and mystery may in itself be a bit short and is overshadowed
by the characterization and the strong character beats.

Nerd Coefficient : 8/10 "Well worth your time and attention”