Microreview [Book]: A Big Ship at the Edge of the Universe, by Alex White

There's tons to enjoy about Big Ship, especially the synthesis of high technology with a unique magical system. 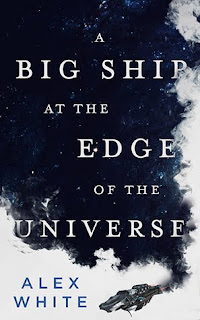 So, let's get this out of the way first: Yes, the title of this book is super reminiscent of Becky Chambers. Yes, both involve crews of misfits with vague Firefly overtones travelling the length of the galaxy to find the mysterious object in the title. Yes, I may have replaced the actual blurb of "A Big Ship at the Edge of the Universe" with the words "like Wayfarers?" in my head, which made for a fair bit of mental adjustment when I actually started reading. Because aside from the Firefly-esque touches, there's not much of the Wayfarers in White's high octane everything-but-the-kitchen-sink magical space opera, whose tone feels more reminiscent of Rachel Bach's Fortune's Pawn or the gunrunner parts of the Indranan War series by K.B. Wagers while simultaneously bursting with its own flair.


In White's world, technologies for FTL space travel and advanced AIs exist alongside magical powers which almost all humans are innately born with. These powers, or glyphs, are apparently fixed at birth and can be highly specific, meaning nearly everyone is a superhero in one narrow area while having normal capabilities in every other field. The powers we see range from low-key practical stuff like cleaning magic, to the ability to talk to machines or turn yourself into a sniper unable to miss a shot, right through to hardcore supervillain stuff like teleporting people into pocket dimensions and conducting large-scale mental manipulation. Glyphs have a biological basis, meaning genetic errors are possible: some individuals are born with "deformed" glyphs which don't function as intended, and a very few are born with "arcana dystocia", unable to practise any magic at all. The condition prevents these people from interacting with advanced technologies that require magic, as well as being stigmatised and misunderstood among the general population.

Elizabeth "Boots" Elsworth is one such non-magical individual, although she's got by just fine for forty years even after leaving her former military career under traumatic circumstances. Boots develops fake salvage maps for a living, a career which is getting progressively less viable, but she may just have stumbled on a genuine find: information leading to the Harrow, a big ship at the edge of the universe (of course) with an enormous salvage fee available to anyone who finds it. Unfortunately, Boots discovers this information just as her past is about to catch up with her in the form of the Capricious, the warship she used to serve on, complete with former captain Cordell. Simultaneously, almost-champion racing driver, arcane mechanist and spoiled rich kid Nilah Brio is in the middle of her championship-deciding race when another driver is killed in front of her,  with the mysterious killer teleporting Nilah off of the track and out of the running for the title. Nilah is outraged by this turn of events (although perhaps not for the reasons that a decent person would be), and attempts to call in some of her extensive privilege to secure her safety, but events instead conspire to put her in the path of Boots and Cordell. Out of options, Nilah is taken in by the Capricious, which takes on the task of salvaging the Harrow and unravelling the mystery behind the ship, the murder, and other events coalescing around their crew.

A Big Ship at the Edge of the Universe is fast paced almost to a fault, with fight scenes, chase sequences, character development moments and plot advancements all occurring in lightning quick succession. On several occasions I had to go back and reread passages after it became clear I'd missed key information the first time around: the book's fast paced action sequences almost demand to be read quickly, and it can be hard to switch gears afterwards to pick up details of the complex and somewhat convoluted plot. Character motivations were also tricky to keep straight. Nilah is not particularly interested in military history and is basically on the Capricious by coincidence, but has become invested in finding her colleague's murderer and ideally avoiding death herself. Boots and Cordell are initially interested in the Harrow for the salvage fee, but things get personal when they discover the ship is linked to traumatic events that drove them apart in the first place. There are also a lot of plot elements that start as coincidence and then get retroactively justified, which is somewhat unsatisfying. It's not enough to spoil the book, especially as the characters and their relationships are compelling enough on their own (particularly Cordell and Boots, as well as Nilah's developing romantic interest with fellow mechanist Orna), but wondering why the characters are invested in what they're doing comes perilously close to wondering why I'm invested in what the characters are doing...

Despite making me unusually defensive about my reading comprehension skills, however, there's tons to enjoy about Big Ship, especially the synthesis of high technology with a unique magical system and the hints of history which lift the plot from generic heist to something richer. The crew of the Capricious are also fascinating, and there are plenty of characters beyond Cordell, Boots and Nilah who I'd like to get to know better. By the end, Big Ship had presented a satisfying conclusion to its central mystery while also leaving plenty of elements open for a sequel: which, I am pleased to learn, is scheduled to arrive before the end of this year.

Bonuses: +1 seamless integration of the arcane into a science fictional setting

Penalties: -1 everything goes by faster than a Lang Autosports racecar