Microreview [book]: Myth of the Maker by Bruce R. Cordell 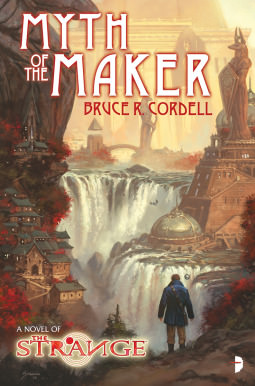 Carter Morrison and some of his friends are VR researchers and game developers. With quantum computing, they discover a limitless source of power with one hang-up; it's actually a dark network connecting universes and it's inhabited by terrible things that consume universes. In a panic, Morrison injects the world of their defunct MMORPG into the network to create a buffer between the monsters and Earth. But Morrison wakes up in a prepared storage unit and has to piece together what happened to his friends and why he isn't still in the Land of the Curse.

Myth of the Maker is fine. It's sort of unremarkable, even if the world is strange. That's a terrible pun, as this is "A Novel of The Strange", which is a table top roleplaying game. This is a tie-in novel, and it expands on that game's setting, but it's unlikely to draw in new fans. I've read the source game materials and then read the novel, and the novel puts some life into the game world, but it doesn't rise above the low bar that is acceptable tie-in media. It also doesn't make me clamor for more of these novels. While it touches on some of the more interesting aspects of the game setting (that is the countless universes, translation of one conscious into another's body as travel between them, and the concept of "alien" visitors from other universes walking among us), it's so focused on one non-Earth universe (the world of Ardyn, a standard fantasy setting) that it largely neglects what could make The Strange an interesting game.

Bonuses: +1 if you were lost reading about the game setting, this novel explains a lot

Penalties: -1 ... but it keeps referencing the six rules of Ardyn and never tells what those rules are, which is extremely frustrating!