Three years ago, I wrote on this site of my worry that Ash vs. Evil Dead would be an ill-conceived resurrection (no pun intended, but...I'll...I'll allow it) of what was, for me, a transformative series of movies. After watching the first three episodes for my review back then, I found my fears to be unfounded. Season 1 of Ash vs. Evil Dead was a welcome, funny, and accomplished return to a world that I loved. It introduced new characters that seemed like they could be pretty cool, and it teased the possibility of an actual character arc in Ash Williams, who was almost by design a character that defied an arc. 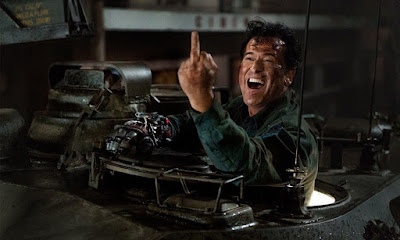 Last week, Starz announced that Season 3, Episode 10, would be not only the Season 3 finale of the show, but the series finale, due to abysmal ratings. So, in the interest of avoiding spoilers, I find myself reviewing the entire series-that-was, rather than the specifics of the final episode. Part of me wonders at the ratings — the show is so damn good, why aren't people watching it?? — and part of me finds that par for the course. Evil Dead and its two sequels didn't take the world by storm on first release. It took years. Eventually, the cult following was so strong that I found myself attending roadshow screenings in small theaters with Bruce Campbell in attendance, where the audience was shouting every word of Evil Dead 2 or Army of Darkness at the screen, and you couldn't hear the movie at all. Then, a few years after that, there were enough legs on this cult project for Bruce Campbell to write a book (the fabulously entertaining If Chins Could Kill: Confessions of a B-Movie Actor).

Now we find ourselves a few years past even that. Bruce Campbell has written two more books. There was an Evil Dead remake. And there was Ash vs. Evil Dead. For years, fans asked Campbell and Sam Raimi for Evil Dead 4. Well, we got it, and it was really, really long. Three seasons of TV long. And it was glorious.

So, to recap...everything: after the events of Army of Darkness, Ash lived in relative harmony as a loudmouthed, deadbeat, big box store retail lifer with a pretty sweet trailer outside of town. But then he accidentally woke evil up by drunkenly reading from the Necronomicon to impress a lady-friend. Two of his co-workers, Pablo and Kelly, got swept up in the wake, and became Ash's partners in trying to quash the return of the Deadites. Meanwhile, Ruby (Lucy Lawless), an ancient demon herself, tracked the three of them to try to recover the book. There was a lot of fighting, and gallons...nay, hogsheads...of blood. So, so much blood. Then, in Season 2, they all kind of joined up, because there was an even bigger threat that faced them all, and Ruby became kind of an ally. Kind of. But that all ended at the end of Season 2, in an apocalyptic return to the Cabin that started it all, and Ash's return to his hometown, which never believed his crazy "demons from beyond" story, and thought Ash was a murderer (who they nicknamed Ashy Slashy). Season 3 introduced Brandy, the daughter Ash never knew he had, and saw the arrival of the Dark Ones, the ultimate baddies from the Necronomicon, and a return to Ruby being a malevolent thorn in Ash, et al's side. 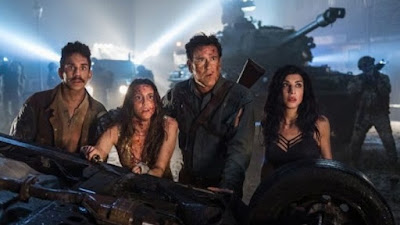 That's right: Ash Williams gets a daughter (and a tank, see photos), and learns how to be a father. Can you imagine? And it's awesome. I felt like Kelly really got to shine in Season 2, and Season 3 wound up being more Pablo's story, but Pablo, Kelly, and Brandy are all amazing additions to this universe, and provided the key emotional anchor that an ongoing TV series requires, but the movies never had to worry about, thanks to their absurdity, over-the-top comedy-horror, and brief running times. Brandy was a very smart addition to Season 3. Kelly and Pablo had both more than proved their mettle, and had become accustomed to the daily, non-stop horror of battling Deadites. Seeing this madness anew through a new addition to the cast really helped re-contextualize the absolute absurdity of the violence of this show, and tied together the progression of "Ash learns to have friends / Ash has to confront his father / Ash has an actual family."

And now we've arrived at what is probably the actual end-of-the-road for Ash Williams and the Evil Dead universe, in its original form. Season 2 had maybe my favorite moments in the show — the episode "Morgue" is probably the single most fucked-up thing I have ever seen on TV, and the episode "Ashy Slashy," where Ash has to confront reality inside an asylum with a murderous puppet on his hand (yep) is both legitimately unnerving and wrenching (seriously). But Season 3 as a whole leaves little to be desired. It meshes with everything that has come before, it is of the same cloth as the films I came of age with and continue to revere, and pushes them into a satisfying, emotional context that just didn't seem possible coming out of Army of Darkness.

There is, in the last episode, however, the strong sense that the writers knew the score, and the series ends where they wanted it to land.

Baseline Assessment: 7/10 (if you're not a fan of Evil Dead and its universe, not much for you here, probably)

Bonuses: +3 for Kelly, Pablo, and Brandy; +1 for a solid reference to the Director's Cut ending of Army of Darkness

Penalties: -1 for the weird Knights of Sumeria, which seemed like episode filler and didn't pay off to a truly satisfying degree; -1 for a less-than-ideal resolution with the non-Ash characters

Nerd Coefficient: 9/10. It's better than we could've hoped for, and remained true to the spirit of the franchise throughout.

Posted by Vance K — cult film reviewer and co-editor of nerds of a feather since 2012, and one of the armies of people who have met Bruce Campbell on numerous occasions, and who he wouldn't remember from Adam.
Posted by vkotrla at 12:00:00 AM