Questions You Don't Want Answers To 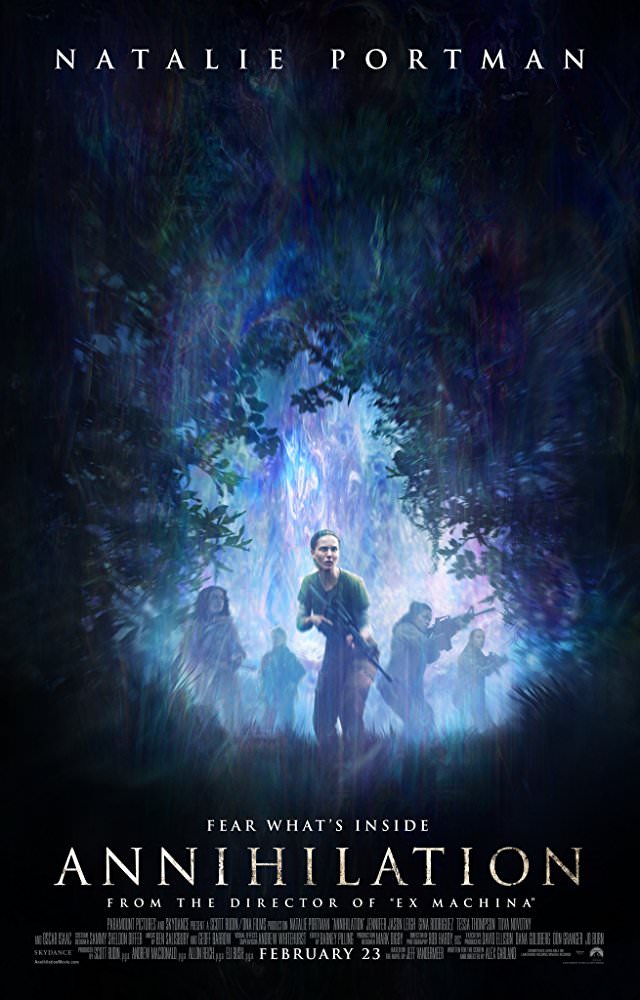 Something happened to Lena's husband. He returned home after a year long mission, but he can't recall how he got home or where he was. After he suffers from a medical ailment and is taken away in an ambulance, the couple are intercepted and taken to a mysterious facility. There Lena learns that her husband was on an expedition to explore Area X, a place where something unnatural is occurring. Lena, a biologist, can't save her husband, but another expedition to Area X is gathering and Lena joins them to find what could be killing him.

Annihilation starts at the ending. Lena's debriefing a group of people in biohazard suits, alone, and trying to explain what happened to her expedition. From here, the bulk of the film follows her and four other women through Area X with some jumps back to examine her relationship with her husband, and forward to the debriefing. But knowing that Lena makes it to the end is no comfort.

Annihilation is fascinating from beginning to end. It starts with a handful of mysteries like what happened to Lena's husband, what happened in Area X, who are the people on Lena's expedition and what happened to them. It deftly unravels these mysteries over the course of the film. What happens in Area X is absolutely worth learning on your own, so I won't explain it here, but it's at times beautiful, strange, and extremely unsettling. It's filled with moments where I had dawning realizations that something bad was going to happen and there was nothing I could do but watch.

But it's not all horrors as it keeps Lena and her relationship with her husband running parallel to the exploration of Area X. While we see where that expedition goes, we also see where Lena's troubled relationship went before her husband left. It nicely pairs with the relationships between the five women on the expedition as they're pushed to their breaking points.

After the film ended, I couldn't stop thinking about it. It doesn't answer every question, and it shouldn't, but it answers enough to satisfy. Annihilation is a dark, beautiful, twisted walk through the woods, with every twist given a human connection.


Bonuses: +1 from minute to minute, you'll never know what is coming next. If you do, you don't want it to happen.

Penalties: -1 at one point the title of the film is screamed and it's the only cheesy part of the entire film
.
Nerd Coefficient: 9/10 (very high quality/standout in its category)

BONUS Novel -> Film Mini-review: As soon as I got home from seeing Annihilation, I immediately bought the novel it was based on (reviewed by The G here). I read it over the course of two sittings because I found it surprisingly short compared to how rich the film is. The novel is very different from the film, and it's a rare instance where the film improves on the source material in significant ways. It's still weird but the film handles the unraveling of relationships and of Area X itself much better. It's so different that one could almost call the film less of a direct translation and more of something inspired by the novel. Perhaps the two other novels in the series make up for it, but I finished the novel less satisfied than I did watching the film.