Hail to the king, baby. 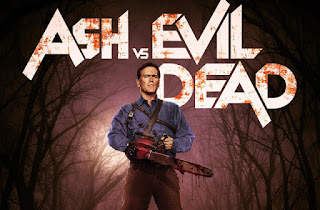 Since Army of Darkness was released twenty-three years ago, fans have been clamoring for Evil Dead IV. But did we *really* want that? Remember the sequels to The Matrix? Remember the Terminator franchise after Terminator II: Judgment Day? Remember the Star Wars Prequels, for Yoda's sake? And we're all collectively about to find out if we *really* wanted J.J. Abrams making more Star Wars movies (remember Super 8 and Star Trek Into Darkness?) as much as we think we do right now. So it's entirely possible that the often-rumored-never-made Evil Dead IV could have done nothing more than besmirch the memory of something many of us held dear.

Evil Dead 2 was particularly important to me. Not only is its stamp of comedy all over the no-budget monster movie I made a dozen years ago, but the Sam Raimi/Bruce Campbell success narrative was empowering and aspirational. I say all of this to explain why I waited until the first three episodes of Ash vs. Evil Dead had aired before I took a look. I wanted to be able to have a sense of the show beyond just the pilot, and temper my expectations, if need be.

And having caught up now, I have to say, it's pretty badass.

We catch up with Ash thirty years after the events of Evil Dead II (remember, even though that film and Army of Darkness were released five years apart, AoD begins on the same day EDII ends). He's still working in retail at a big box store, he's fifty, living in a trailer, and picking up women with the story of how he lost his hand selflessly saving a young boy from an oncoming train. He's a deadbeat. One night, while high and pressed for some poetry to read to a potential conquest back at the trailer, he grabs the Necronomicon Ex Mortis and they read out an incantation or two. Whoops.

So now the Deadites are making their way back into our world, and they're gunning for Ash. They're not the only ones, either. There's a state police officer, Amanda Fisher, who realizes that Ash is caught up in a string of bizarre deaths, so she's on his trail. Lucy Lawless plays Ruby, a mysterious character with a lot of knowledge of these Deadites, and she's after Ash, too. Bruce Campbell and Lucy herself kind of ruined the surprise of who she is on their Colbert appearance recently, but for now the show's keeping Ruby's true identity secret, so mum's the word.

But for once, Ash has help. Pablo and Kelly, two of his co-workers, get sucked into this battle against the Deadites, and by the end of the third episode, they're officially a team. These two, played by Ray Santiago and Dana DeLorenzo, respectively, are maybe the best part of the show. They both bring tons of personality, and have a great rapport with Campbell's swaggering blowhard of a middle-aged Ash. And in maybe five minutes of total screen time so far, Lucy Lawless is already amazing.

Starting in the third episode, the show begins expanding the world more, and expanding out the range of evil entities that the Necronomicon has access to. A lot of people will probably grouse about that (and make legitimate complaints that the first demon we see looks like he was lifted directly from Hellraiser or Pan's Labyrinth, but it's absolutely necessary for the demands of a TV show, and I personally thought it was cool to see our first glimpse of something other than a Deadite.

What it comes down to, though, is that so far this show is a worthy successor to the films. There's fan service — check out the last moment of the pilot, for instance — but there are new elements and compelling characters that offer more beyond Ash's catchphrases, and there are even hints that Ash himself may be on the first steps of a character journey. Also, there are gallons, and gallons, and gallons of blood, and the humor is plentiful and legitimately funny. It reminded me why I loved the films so much in the first place, and I kneel at the feet of the folks who do this particular thing — still — better than anybody.

Bonuses: +1 for the new cast of regulars; +1 for not letting me down (and convincing me to subscribe to Starz)