Here is hoping that everyone attending SDCC was successful in their hotel endeavors. My attempt to help out a friend was a failure, but when you have far more people trying to book rooms than are available it is to be expected. Fortunately I have family that I stay with on my annual trip to San Diego. 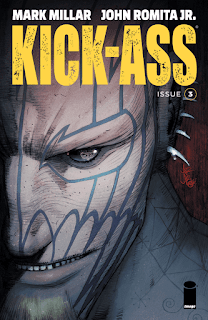 Pick of the Week:
Kick-Ass #3 - This is the first issue that feels like the Kick-Ass of old. We are introduced to our first super villain in Violencia, a creep who enjoys going to prison when he feels he has become soft. Once he feels he is himself again he breaks out and rejoins his group. Patience follows up a tip on raiding a money laundering ring, only to find herself face-to-face with Violencia. This is happening as her children as sleeping at home and it doesn't look promising that she will return. Throw in the twist that her brother-in-law is involved with Violencia and things are not looking good. This issue featured some of the over the top violence that came to define it.  I am currently very afraid for Patience and will remain on the edge of my seat until issue #4.

The Rest:
Daredevil #601 - The city is under seige from a group of ninjas being controlled by a demon known as The Beast. Fortunately for Daredevil, a pair of ninjas attempt to kill him when he is locked in the paddy wagon and end up setting him free. Due to the fact that Kingpin is undergoing life saving surgery, Matt Murdock is acting Mayor.  His first act as mayor is to free the superheros who were just jailed and next issue we will enjoy the team of Daredevil, Luke Cage, Spider-man, Iron Fist, Moon Knight, Jessical Jones and Misty Knight. The next issue is going to be a lot of fun.

Star Wars Adventures #9 - While it would have been nice to start a bigger story in this issue, we get two cute stories featuring R2D2 and C3PO and a nice look at IG-88 rounding up some bounties. Of course this is all handled in a family friendly way and remains a book I highly recommend to Star Wars fans of all ages. This series shines in the stories that go beyond one issue, but still manages to provide bite size nuggets that will hold the attention span of your youngest fan.

Infinity Countdown #2 - The quest for the infinity stones pick up some steam as Drax and the pregnant Eve Bakian get some assistance from the Guardians of the Galaxy. To complicate matters, Galactus pays a visit and Bakian does give birth to a healthy baby girl during the battle. While that was an interesting development, the arrival of Adam Warlock to the story and what follows is what will drive the conversation between this issue and the next. I won't spoil the end of this issue, but it actually has me feeling excited about this Marvel event. I should note that I often fall for the gimmicks in these events to ultimately be disappointed at its conclusion. Hopefully with Gerry Duggan writing the main story it will deliver.

The Sixth Gun #1 - When I reflect on the impact that this series has had on bringing me back into the world of comic books I can't help but feel nostalgic. Cullen Bunn does a phenomenal job introducing the reader to the mystical world he created with Brian Hurt in the opening few pages. We learn about a mysterious group called the Pinkerton Detective Agency, witness the horrifying Gallows Tree, and learn about a powerful weapon known as the Sixth Gun. Taking place following the Civil War, this Western is an absolute delight that only got better as the series progressed. It had me on edge throughout and is well worth reading through all 50 issues.