This Saturday marks the return of International TableTop Day! I cannot wait for another excuse to play board games all day on Saturday and encourage you all to find out what events are in your area by checking out the official website.  I am looking forward to playing Azul, a clever tile drafting and placing game that has some stunning components. I've only played it a few times and it is quickly becoming one of my go to games. 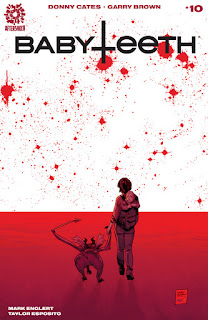 Pick of the Week:
Babyteeth #10 - I have enjoyed Babyteeth since the first issue and it is one of my favorite books on my pull-list, but Donny Cates and Garry Brown outdid themselves with this issue. Following the chaotic events of the Coyote's assault on the compound where Sadie and her family were, this issue presented a softer side and reminded me that Sadie is a child herself and cannot fathom how to deal with her child possibly being the Antichrist. In this issue we learn why Sadie is hiding in Palestine and why she is currently without her child. Clark apparently can open up a portal to the red dimension and is currently in that evil place with Sadie's sister. We have officially come full circle and are current with Sadie recording the message for Clark in the first issue. The humorous interlude of the flying demon cat was definitely a highlight in an otherwise extremely emotional issue. I won't spoil the additional details we learn in Palestine, but I can confirm that this series is taking a turn I did not expect and I couldn't be more excited about.

The Rest:
Saga #51 - Another gut wrenching issue that was otherwise filled with some moments of peace and beauty. Brian K. Vaughan and Fiona Staples' have created an amazing universe filled with some of the most spectacular beings that have graced a comic book page. Saga serves as a reminder that there is good in even the most trying times. We have Prince Robot trying to make right with his family, Marko and Alana trying to provide as normal of a life as possible for their daughter, and even The Will seeking redemption for his mercenary past.  Despite the punch in the gut in this issue, the reader is left hopeful that some of this will be behind us in the near future.

Redneck #12 - Holy hell this issue is full of blood. Being a comic book about vampires it isn't the most shocking revelation, but holy hell that was a lot if blood.  I mean a freaking lot of blood. I am going to have to go back and read this to make some sense of the carnage that I just witnessed. Phil plays one hell of a trump card to force the vampires out of his house the the battle between the FBI and fleeing vampires was a site to behold. Donny Cates sprinkled in a nice surprise and is setting the stage nicely for the next arc. If you haven't read this series yet it would be a great time to pick up the first trade and catch up on the rest of the story.

Darth Vader #15 - Vader really is much more impressive in comic book form. I don't think it would have fit the Star Wars saga to have him mind control a giant squid in order to avoid drowning, yet it feels oddly appropriate given the extent of his power that has been on display in this series. The Mon Cala are putting up one hell of a fight and are taking advantage of their planet's natural defenses, but the Empire is escalating its attack and Vader and the Sixth Brother are en route to the Jedi hidden on the planet's surface. Something tells me there are going to be a lot of dead Mon Cala in the next issue.

East of West #1 - I do enjoy Jonathan Hickman as a creator, but I need to be in the right state of mind to venture into his creations. Over the weekend I had a friend recommend East of West as it recently was picked up in a television deal. After reading the first couple of issues I understand its appeal. I enjoy a good sci-fi/western and this series centers around the birth of the three of the four horsemen of the apocalypse. The fourth didn't survive the ritual and it seems to me that entails him remaining in human form for his siblings to track down. The opening plot focuses on an assassination attempt on the president's life. There is a lot to soak in and I am looking forward to learning more about what Hickman has in store for the readers. Fortunately I picked up the trade and look forward to finishing the first arc.