The rare adaption that outshines its source. 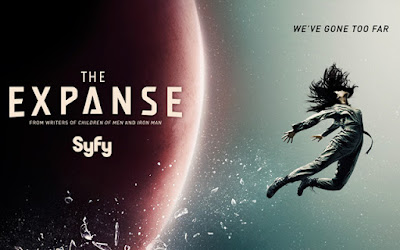 SyFy’s The Expanse is arguably the best show on television right now. It’s at least the best science fiction show in quite some time. It is an action packed and nuanced space opera with phenomenal acting and character profiles that has viewers glued to the TV every week. Best of all, it does all of this despite the source material. That is not to say that the book series isn’t good, it is a fun read but is at times rather problematic. The G nicely points out the main problems with the first book in the series in his Leviathan Wakes review, so I won’t reiterate. But the show overcomes many of these issues leading to one of the best on-screen adaptations to date.

Here are some of the areas where SyFy’s The Expanse succeeds as a great on-screen adaption of a series:

1) The Characters: I can’t agree with The G more that one of the major weaknesses of Leviathan Wakes is the characters. This is not entirely surprising to me as I’ve had issues with Abraham's characters before and stopped reading Dagger & Coin because of it. However, the characters are, to me, what makes the show so great. Where author James S.A. Corey gave us meek but supposedly intelligent (I say supposedly because we never really see evidence of it) Naomi, SyFy gave us bad ass, commanding, OPA-involved Nagata. Amos, who is my all time favorite character in the show, comes off as a bloated meat head stereotype in the book, but SyFy and actor Wes Chatham transform him into a multidimensional figure who is fierce and loyal and whose background is seeping out little by little each episode. 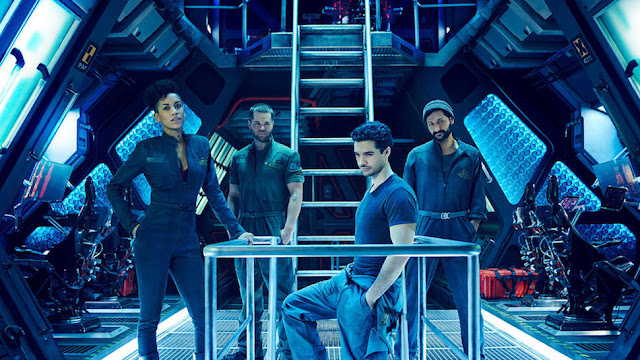 Book Holden is almost frustratingly naïve and a horrible captain, but not in that ‘I’m supposed to be a horrible captain because its part of my character arc’ sort of way – he just plain sucks as a captain. In Leviathan Wakes he is constantly buzfeeding raw information across the universe because he thinks that people should know everything that’s going on before even he has a chance to process it. TV Holden still releases sensitive information (once) and does so as a failsafe before he is captured by the Martians. SyFy gave him a believable reason to do this. Thank you SyFy. Even Alex, the swashbuckling pilot who exists solely to fly the ship in the book becomes layered and sympathetic in the show.

Finally, there is Miller. The G states that Miller is just your standard run-of-the-mill grizzled veteran cop, which is true. This is not lost in the show. In fact, Miller was my least favorite show character the first time I watched it, precisely for this reason. I felt that being so one-dimensional he didn’t at all fit with the rest of the cast of characters. The funny thing is though, that Miller turned out to be my favorite character in the book, because in bookverse, the other characters are less dimensional than even he. Oh, and lets not forget Jared Harris as Andersen Dawes. Dawes is a character that gets fleeting mention in Leviathan Wakes, but nearly outshines everyone in the show.

2) The plot: Like any good adaption, The Expanse inserts or ups the drama at times, but somehow (/s) figures out a way to do it without boobs or rape. For example, in the book the survivors of the Canterbury route their shuttle to a Martian ship, a journey that takes many days – whereas in the show they are captured by this ship, prompting Holden to release a statement that Mars may have been behind the attack on the Cant and if Mars kills them then there is your proof - in a sense securing the safety of him and his crew. There was also the decision to overlap Avasarala and Earth politics from Book 2 with the goings on from Book 1, which enables the viewer to better understand what is happening throughout the universe at the time.

3) Pacing. Last but not least, a major nod has to be given to whoever decided on the structure and pacing of the first season. I watched the show first and it blew me away when I read the book to discover that the first season only covers half of the first book. Almost always in adaptions (in fact, I can’t think of an occasion when not), each season corresponds to a book. Often times this results in details or arcs being left out or modified, and usually not for the better (coughgameofthronescough). The brilliant soul who thought ‘you know what, I see a clear beginning, middle, and end here with Eros’ deserves an Emmy. Because not only do you get to keep the integrity of the source material, you don’t have to make shit up (coughgameofthronescough) to keep the story line going through multiple seasons. Bravo.

Overall, The Expanse is an exercise in how to properly adapt a book to screen. It is by far my favorite show on air and I’m excited to see if they can keep it up (looking good so far). Despite how it may sound, I do actually like the books. Perhaps this is because I can infuse the better TV characters over poorer book ones when warranted, but as I continue along reading, the books seem promising.

Bonuses: +1 for Nagata, +1 for pacing and structure, +1 for Avasalara's wardrobe

Negatives: -1 for the slow start