Microreview [book]: The Stars Are Legion by Kameron Hurley

A stunning redefinition of space opera filled with high action and adventure. 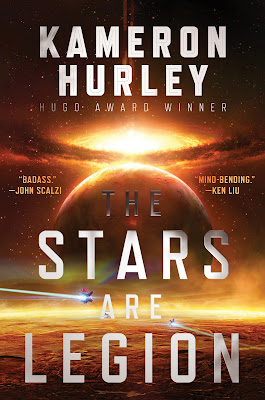 The Stars Are Legion is Kameron Hurley's standalone space opera. If you're at all familiar with the work of Kameron Hurley you know that slapping a simple genre label on one of her novels is an act of folly.

The Stars Are Legion is a reimagining of what space opera can look like. An interstellar war has raged for generations, worlds have been destroyed, and the fate of the whole war rests on the battle for one final world. This all sounds like standard space opera, except in the hands of Kameron Hurley this is the bare skeleton she uses to build a much more amazing structure.

One of my favorite aspects of The Stars Are Legion is something Hurley does across many of her novels. Technology is often bio-organic.  It's messy and the world ships here are tightly contained worlds with corridors more akin to arteries than simple passageways. But, of course, nothing is simple here. There are elements of the womb-punk of Hurley's debut novel God's War. I almost wrote that not much else was similar except in the use of how wombs are a significant plot device, but that's not true either. Like God's War, The Stars Are Legion includes kick ass women,x the use of insects as weapons, and betrayal. Like The Mirror Empire, The Stars Are Legion includes families and empires at war with each other and with themselves.

The Stars Are Legion is ugly and messy and violent and while it contains space battles and warfare across worlds, this is a space opera like none other.  Hell, the women not only give birth to the supplies their worlds need, but they give birth to new worlds themselves. Show me a space opera that does that.

More than just focusing on all the cool and nasty stuff Kameron Hurley uses to build her novel, we should also discuss just how kick ass The Stars Are Legion is. Hurley has packed The Stars Are Legion with action, space battles, invasion, the exploration of worlds, betrayal, murder, adventure, and pretty much everything you might want out of a novel. I suppose I can't realistically claim that it i everything you want, but it's definitely everything I want and it's delivered in an unexpected package.

When I say unexpected, I don't mean that it is unexpected Kameron Hurley wrote such an spectacular novel. I expect that. We should expect the excellence. What we don't expect is how we get there.  Through the betrayals and the nasty and the ugly, Kameron Hurley has created something beautiful and moving.

The Math
Baseline Assessment: 9/10
Bonuses: +1 because all of the characters are women, but it's just the way of life
Penalties: -1 because it could be difficult to figure out how the world works (as in, "I don't understand the setting")
Nerd Coefficient: 9/10 "Very High Quality / Standout in its Category".
See more about our scoring system here.