Movies I am Looking Forward to in 2017

I want to be Joe Sherry when I grow up. "Don't we all," most of you say. "Who is Joe Sherry?" others ask. Joe is the guy who posted 24 books he is looking forward in the coming year. Since I have been watching and reviewing more movies these days, I thought I'd share what I am excited about in 2017 (and a few I am not): 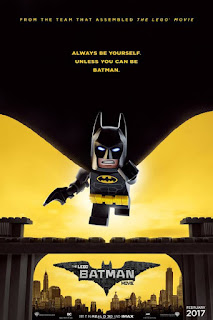 The LEGO Batman Movie (Feb 10): I mean, right? I wanted to do this whole thing by picking a couple movies from each month, but unless you are excited for xXx: Why is This Happening, January is a dud (also, I am actually writing this in January, but it's going up in February, so, whatever). So we skip to February, and holy hell, I am excited for this movie. Equal parts fan service and irreverent, self-aware hilarity and... sign me up. I assume y'all are on board, too. Also: If you want DC, Justice League and Wonder Woman are not on this list, so enjoy Batman in brick form.

Kong: Skull Island (Mar 10): The King Kong remake was... ok? This looks like a solid adventure, and I am always down for that. However, nothing puts fear in my soul like the phrase "sequel to a remake". Nevertheless, put in another giant ape/dinosaur fight and I will be happy.

Guardians of the Galaxy vol 2 (may 5): I am on the very, very, very short list of people who were not in love with the first one, but vol 2 looks to improve on it (which is great news for all of us). Can't go wrong with Rocket & Cute Groot.

Alien: Covenant (may 19): I am on the very, very long list of people who thought Prometheus was... not good. Maybe this won't be! Let's find out. Together.

Pirates of the Caribbean: Dead Men Tell No Tales (may 26): ha ha ha I'm kidding. Side note: I have wanted to use this very predictable joke for about 18 movies so far, but freakin' seriously? Why are these movies still being made? Do not go see this movie unless a family member worked on it. Maybe not even then.

OK, real quick aside on the chronological thing. Look at this: 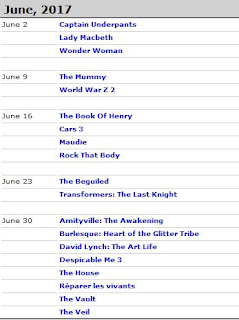 Holy shit. That is depressing. I want Wonder Woman to be great so bad, but the whole DCU has yet to release a movie that is even watchable, so my faith is limited, and there are already rumors of it being a mess. Other than that... if you have kids, I guess? Cars 3 and Despicable Me 3 (Trey Parker!). But, goddamn, that is a terrible slate of movies.

Spider-Man: Homecoming (Jul 7): OMGOMGOMGOMGOMG THIS MOVIE LOOKS SO GOOD. That is all.

Dunkirk (Jul 21): Real talk, gang: I do not care about anything else in 2017 until I see this movie. Why, you ask? GLAD YOU DID. In the first place, Dunkirk was a massively important battle in the Second World War, and does not get anywhere near the attention other (read: involving Americans) battles do, and this looks to be on a Saving Private Ryan- level for accuracy. In the second place, Tom Hardy. Third, Cillian Murphy. Fourth, Tom Hardy.

Dark Tower (Jul 28) Oh, July, look at you, trying to make up for June. This is really happening, and it has Idris Elba. I am going to live in a theater for all of July.

The Emoji Movie (Aug 4): what the hell. why is this happening. no.

100 Bullets (????) Tom Hardy producing one of the best graphic novels ever. If you haven't read it, go do so now. It is well worth any spoilers.

It's hard to say here in the early going of 2017 if this will be a good year for movies or not, but there are some movies (in addition to the ones I have sarcastically referenced above) that I am either extremely wary of, or just plain avoiding.

Wonder Woman/Justice League: I want to like these so much. I don't have a horse in the Marvel/DC race, but I am always up for a good superhero movie. Every single thing about the DCU has been a unmitigated disaster so far (as I have talked about before), and them jostling things around doesn't give me a lot of hope for the future. Wonder Woman I will give a shot- Gal Gadot & Chris Pine will usually get my ten bucks- because I at least will vote with my money for more women leads and superheroes. But I still have my doubts about them making a good movie. Hope I'm wrong, though.

Power Rangers: Please stop repackaging my childhood and selling it back to me at today's prices.

Transformers: About Last Night or whatever honestly I didn't even look up the title: THE HELL DID I JUST SAY. How the hell is Michael Bay still allowed to make movies? HOW? Do you know how many women or PoC directors are working in Hollywood? Cuz it's like five. But Michael Bay keeps cashing checks.

Split: Speaking of people who shouldn't be making movies anymore...

Pro tip: If you want me to see a movie, do no put that name in the trailer.

The Mummy: I know I said I am always down for a good adventure movie, but this looks like they lifted Enchantress from Suicide Squad and dropped her in. I would love a great Egyptology movie, but this does not look to be it. On a related note, I am available to write a Tomb Raider movie aaaaaaaanytime.

General Animation: Aside from Batman, this looks to be a rough year for animation- which is a bummer. Cars 3, Despicable Me 3, Rock Dog (the hell is this movie even trying to be?), Boss Baby, Nut Job 2, Smurfs... The cupboard for animation looks pretty bare for 2017. The only hope I can see is Pixar's Coco, out November 23.

The Great Wall/Ghost in the Shell: Seriously, Hollywood? Asian actors are THAT hard to find? C'mon.

Bad Dads: I know nothing about this movie, but can we stop with the Bad Moms/Dads/Bosses/whatever theme now please? Thank you.

Those are movie I am, and am not, looking forward to. How about you? Quick note before you start yelling at me: I am not a horror fan, so they are on neither list. Feel free to chime in if you are, and let me know which ones I should see from behind a pillow.