I am going to forego my normal intro and get right into the books! 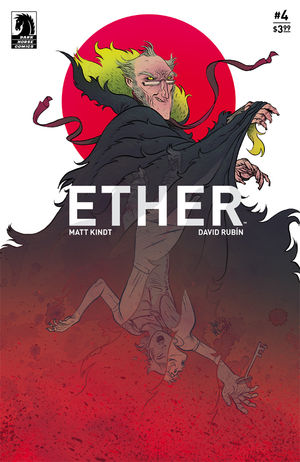 Pick of the Week:
Ether #4 - Matt Kindt has a gift when it comes to creating intrigue and really forcing you to focus on small details throughout his books.  Ether took an unexpected turn today, when we were introduced to Hazel and learned about her journey into the Ether as a child.  With no way of telling people where she had been for five years, she had to carry this secret until she connects with Boone Dias.  Through the fantastical art of David Rubin we are reminded that the Ether can be both amazing and utterly horrifying at the same time.  I look forward to learning more about Hazel (Kindt revealed some nuggets in this issue that have me salivating) and can't recommend this series enough.

The Rest:
Dept. H #11 - Another Kindt book this week?  With double the Kindt (Sharlene is also working on this title)?  Mia is not much closer to figuring out who murdered her father, but she has uncovered some evidence and had an epiphany that should provide clarity moving forward.  She had this vision as she recounted a story her father told her when she was younger.  It was a beautiful escape from the danger that her and the crew are currently in.  It finally clicked that the art in this series reminds me of Nausicaa in the Valley of the Wind and it couldn't be more appropriate.

Teenage Mutant Ninja Turtles #67 - The new arc of TMNT kicked off with a bang and I am quite concerned.  Slash was recaptured by government officials and they are attempting to control his rage and use him as weapon.  Meanwhile, Leonardo is struggling to get all of the turtles on the same page given the recent string of events.  Hopefully he will get things sorted out soon, because the government's first test with Slash is on the Mutanimals and it is a doozy.

The Walking Dead #164 - I am still amazed that this series is still chugging along and even more surprised by the supposed friendship between Rick and Negan.  One thing that Robert Kirkman has done is build a deep seeded hatred and mistrust in Negan.  No matter how many times he appears to have redeemed himself, you still don't trust his intentions.  Even after learning at what may have caused him to become evil incarnate, I can't feel sorry for him or trust him.  I hope I'm wrong.

Old Man Logan #18 - We reach the exciting conclusion to the arc in which Logan went to save a crew from a ship that had been overtaken by Brood.  Seemingly pulled between two different realities, he is finally able to free Jeanie and with her help subdue the beasts.  The vision of the baby he left behind in the wastelands haunts him and will steer his next course of action.  Really excited with the direction this series is headed.

Daredevil #17 - Daredevil's new arc kicked off in exciting fashion as Matt Murdock visited a confessional in a local church!  Nothing like sharing something that you feel shamed about with a total stranger!  In all seriousness, it is a fine vehicle for Daredevil to get something off of his chest.  The secret of how he put the secret back in his secret identity.  If you didn't know, his identity became known to the public and it created all sorts of problems for him.  Somehow he was able to put the rabbit back in the hat, and it will be interesting to learn how.  I'm oddly really looking forward to this arc.