a.k.a. Harry Potter and the Plot of Convenience

a.k.a. Harry Potter and His Lightning Shaped Plot Device 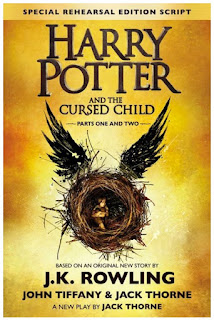 This review contains spoilers for Harry Potter and the Cursed Child, but if you haven’t read it yet don’t worry, you’re not missing much.

It is no secret that I am not a huge fan of what Rowling has been doing with the Potterverse, but after some soul searching, I decided to approach Harry Potter and the Cursed Child with an open mind and an open heart. Because, like nearly every other Harry Potter fan out there, I would love nothing more than another Harry Potter book. But as I’m sure you know by now, Cursed Child is not actually a book – it’s a script (to a two-part play that the vast majority of Harry Potter fans will never get to see) – and it was not actually written by J.K. Rowling, despite her name being plastered across the cover.

Surprisingly, the fact that Cursed Child is a script is likely its best feature. Good dialogue is very hard to write and Jack Thorne does a great job of advancing the plot solely through dialogue with small snippets of set direction throughout. Although, I found the overuse of the word ‘discombobulated’ off-putting, but perhaps discombobulated is a British-ism that this American isn't used to (English Scribbler?)... personally, I’d have gone with disoriented.

Harry Potter and the Cursed Child begins right where Deathly Hallows left off, with the (god awful) epilogue and the children of the original series characters heading off to Hogwarts. And here is where begins an entire play of nothing but cheap plot devices. For example, the children are all overly familiar with and fond of reiterating the events of the series proper, which is an unnecessary stating of the obvious, thank you very much. It begins with Rose Granger-Weasley telling Albus Severus Potter (ugh) that it is VERY important who you sit with on your first Hogwarts Express ride because that is how their parents all met. The two of them end up sitting with Scorpius Malfoy, Draco’s son, and in an obvious reversal of Sorcerer’s Stone, Albus decides to be friends with Scorpius (who is the opposite of his father at that age) and Rose un-approvingly leaves the compartment. As you might remember from the epilogue, prior to boarding the train Albus expresses concern that he’ll be sorted into Slytherin, and he is, which of course makes him a terrible human being and everyone hates him for it. Not really, but it is the source of much resentment throughout the story, as Albus spends most of it ala Harry in OOTP minus the moldy Voldy connection to excuse it all.

The story then jumps ahead to the students’ fifth year where the major plotline is an attempt to go back in time to save the life of Cedric Diggory, of all people. This is orchestrated by Voldemort’s daughter and yes, you read that right. Apparently Voldemort got it on with Belletrix in the back of his tour bus nine months before the Battle of Hogwarts. Anyway, the product of the Voldastrange ship apparently needs Albus and Scorpius to fulfil one of the most lame prophecies ever:

When spares are spared, when time is turned, when unseen children murder their fathers: then will the Dark Lord return

I mean, now we’re not even trying anymore.

Anyway the boys get their hands on the supposed last time-turner in existence, which Hermione hides in her book shelf using a series of crappy puzzles. Their first attempt to save Cedric results in an altered timeline where Ron and Hermione do not get together causing Hermione to become a shrew, ya know, as all women do when they don’t find a man. Wait a minute Cursed Child, I have something here for you…


The second attempt to save Cedric involves Albus and Scorpius blowing him up like a balloon which apparently humiliates Cedric to the point that he drops out of the Tri-Wizard Tournament and becomes Death Eater extraordinaire, resulting in an altered timeline where Voldemort reigns supreme.

‘But you mentioned Hermione!’ I can hear you saying. ‘What about Harry, Hermione, and Ron?’ Well, don’t tighten your nostalgia strings yet. The trio are now in their 40s, and despite having been married for like what, 20 years, Harry and Ginny still have zero chemistry. Ginny is sports editor at the Daily Prophet, Harry is the Head of Magical Law Enforcement (and not an Auror), Hermione is Minister of Magic of course, though she doesn’t really get much respect, and Ron is such a joke that he literally runs the joke shop but for some reason is never there and is always at the Ministry of Magic to conveniently be involved in all important conversations. Very rarely do any of these characters seem like their old selves which is either a lack of understanding or execution or both by the author.

When Albus disappears Harry’s scar starts hurting again and for some reason shows him exactly where Albus is. Rita Skeeter has published what seems to be The Goblet of Fire, which all of the kids have read front to back so they know exactly what to do and where to go to find Cedric. Dumbledore has a portrait in Harry’s office, because… actually I have no idea why he would have a portrait in the Head of Law Enforcement’s office, and so on with the cheap plot devices.

I could go on, but I won’t. The play is just not very good. The plot sucks and is not at all original. It doesn't take much imagination to give your beloved characters children and have those children basically relive the events of the original characters, and that is pretty much what is going on here. I know there were convenient plot devices in the series proper, but they were enveloped by extraordinary exposition, world building, and character development. It just doesn’t work here. I’m sure the production is very beautiful and well-acted, but I, like you, will probably never get to see it.

We can, however, thank Harry Potter and the Cursed Child for two excellent Potterverse revelations: 1) the Hogwarts Express trolley witch is a knife handed warden ninja warrior, and 2) even wizards have to worry about floo-ing while intoxicated.

Oh, and by the way, I have no idea who the ‘cursed child’ is supposed to be – Delphi (Voldy’s kid)? Albus? Scorpius? Theodore?

After reading this it has become clear that we really don't need any more Harry Potter books. I agree that his story is over. But that doesn't mean we can't have more books in the Potterverse. In particular, I think Fantastic Beasts, with a well done (read: put some effort into it) American wizarding world could make a fantastic (pun not intended) series of novels.  Fanfictioners unite!


Baseline Assessment: 8/10 because it starts with Harry Potter and the..

Bonuses: +1 for being surprisingly easy to read for a script

Penalties: -2 for making Hermione miserable without a husband, -1 for Harry’s scar serving as a missing child beacon, -1 for completely devaluing Ron to the point where he serves no purpose except poor comic relief, -1 for not even trying to create unique new characters or plotlines, -1 for dropping the ball with the only potentially good new character of Scorpius who is mostly just lame jokes and self-proclaimed geekiness which is defined only by reading books, -2 for using the names Harry Potter and JK Rowling to promote this as the eighth Harry Potter story but producing nothing but lazy drivel

Nerd Coefficient: 1/10 - especially bad considering what it claims to be and for playing on fan emotions to make money because you know that’s why they published this crap.