... or why Preacher is that cool friend that lets you down 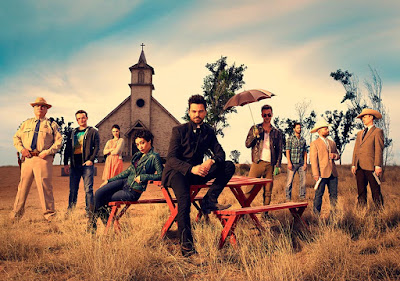 I walked into Preacher  (AMC, 2016) with an open and eager mind. Much like our amazing reviewer Tia who looked at this series on Monday, I had not read the comic series nor have I (unusually for me) watched the review shows or read many articles. I knew enough that Sam Catlin, Seth Rogen and Evan Goldberg were keen despite or perhaps because of being huge fans to reinvent the structure and landscape of the comics in order to have a more accessible, continuity-friendly universe, and has therefore set up the stories to revolve around the town of Annville rather than the global road trip of the source material. I also had read how they knew they couldn't go all-out with the extreme and often offensive (unless you're 15) elements in the books. The 'N' word and the apparently-frequent anal sex bigotry were to be removed, and a more sedentary existence for the titular character was to be the plan.

And so the pilot, the fan reaction, the excitement over some great performances and generally positive buzz. I watched from day one and the large caveat I must include to the following comments is that I gobbled it up each week without fail - particularly-keenly once Turn Season 3  had finished (sobs into his flagon of ale). The action direction, the music, the twisted physical comedy, the use of language, the merging of horror-western-farce-fantasy-thriller-drama - fantastic. This was self-aware comedic fantasy with lovely dollops of true darkness, ridiculously cartoonish violence and outstanding dialogue. Particularly for me, I was excited by the presence of Joe Gilgun and Ruth Negga, two of the surprisingly European-heavy cast list (SERIOUSLY, America, do your guys just charge too much??). Both were stellar in the UK series Misfits (if you don't know of this, read this then getting watching, or get off my planet), and if you haven't seen Gilgun in This Is England you are missing out (although his real accent might be as tricky for some as his 'Oirish' one in Preacher ). Nevermind the presence of Rorschach himself. The fringe factoid that Negga and Dominic Cooper are a real-life couple was a bonus nugget for hope in that rare thing - a portrayal of a proper relationship with performances grounded in real history, although I'm still not sold on Cooper, who doesn't seem to lose himself in his roles and always seems to be 'acting' in my eyes except for rare moments.

And it is in Cooper's Jesse character that the majority of the issues I have with Preacher are centered. I know, he's an anti-hero. I know, we don't need to love characters or even like them to enjoy their journey. I largely disliked Walter White with a physical squirm yet rooted for him and followed him to the end. I hated Martin Freeman in Fargo, but cared deeply for his fate (namely, that he not get away with it). I find Nurse Jackie disagreeable to the point of disgust at times but she is one of the best lead protagonists of our times. And so on. But Jesse is a frustrating enigma for so much of the series. Staring out at a beautiful sunrise with an arrogant yet peaceful smile, he dares you to ask what is behind those eyes, and Cooper is in his element in these respects. But the actions he takes, or fails to take, with those around him smack of a mildly depressed, self-absorbed stoner rather than the deep, complex person struggling with who he is and where that places him on the moral ladder. As a supposed (albeit very compromised) man of faith (lapsed, faltered, severely wounded, whatever - belief is belief, something I don't have but Jesse is clearly supposed to), the Preacher is pretty much a failure of writing. He clearly wants to be left alone; he clearly needs affirmation from others. He clearly wants to put the stress and danger of his past behind him; he clearly has no interest in doing the easy or safe thing. He is shy and cautious with his affections; he thinks nothing of abusing Emily's adoration of him. A few such conflicts would suggest an interesting and human protagonist; all of these and more in the sort of character study Breaking Bad exemplified would be vital ingredients in a heady brew. In the case of this series, where Jesse is largely quietly reactive and evasive with what he wants or who is is, whilst other characters leap from the screen in a few words and actions, is nothing short of poor storytelling focus. It left me just annoyed with him and disinterested in his fate, and nearly collapsed the powerful portrayals of Tulip and Emily because they came across as passionate for someone who gave so little back. It also didn't help that the plot sometimes kept him at arm's length, particularly in the run up to the finale.

In Emily however we had the first proper moment where I felt my emotions disengaged from proceedings. Her actions with the mayor were not in keeping with her character before, shockingly so, but a shock is fine if it reveals a new deeper truth, or sends them off on a new tack. Yet she sort of went back to normal and smiled about it a little, and no explanation was apparent other than he was creepy, had a horrid giggle and had been a bit mean towards Jesse. No sense that she was doing anything other than sexually controlling him while waiting on Jesse, and certainly no sense she would flip to the dark side of evil, rather than run a mile from Cassidy and warn Jesse of his monstrous mate. Deeper currents of emotion may have been at play and Lucy Griffiths has the chops to pull that off with a glance but never was really allowed except for a brief rebellious, celebratory moment at the organ).

Now, this is where the finale comes in as the slap in the face for the journeys of her and others. If it was a bold cliffhanger, then fine but --- spoiler ahead, skip to next paragraph if not seen finale yet ------ SPOILER BREAK---------------------
ready? --- ok---- the massive destruction of the entire town and its inhabitants was suggestive of a darkly comic trick like the Tom Cruise death sub-sub-plot, not the shock culmination of weeks of character development and inter-personal relationship drama. If they are all dead, well then what was the point of those journeys? Why, for instance, suddenly shift a good deal of attention to Donny's S&M wife, regardless of how great a performance it was, in the final episode, yet ignore several key people? Why build up the conflict of Quincannon and Jesse, with Root in the middle, and all the dark politics of the town, to then drop it abruptly and spend time explain the frankly dull Carlos backstory? And how, for the love of the God of Meat, did Jesse, Tulip and Cassidy all get to just wander out unarrested, and be off in a diner distant enough to not hear or see the explosion.. and why... and ...and... grrrrRRRRR!

SPOILER BREAK OVER, WELCOME BACK ------------
Too many holes, too many liberties with emotional journeys, not enough genuine thrills or jeopardy, and definitely not enough Fiore and DeBlanc. I would even dub it plain lazy if it wasn't for the clear effort of filmmaking on display. But I do wonder what it would have been like if less time was devoted, say, to the endless fight in the motel room against the Arcangel, or the powerful but hopelessly-extended Saint of Sinners sequences. I love me a western. I mean, I really Love me a Western. But his scenes, especially the final reveal of his existence, took up so much time! Time that could have been spent better establishing Jesse's everyday life, his friendship with Cassidy, his struggle with faith, and above all his connection with others in the town. Those others also got short shrift. Yes, the key man in the control room that leads to disaster (spoiler-free I hope there) was a wonderfully-mysterious addition, but did we need to return to him so many bloody times when we could have been elsewhere?

Like Tia, however, I loved all she loved - the cinematography and artistic framing, the appealingly 90s tang to many elements, the acting in general. Some of the dialogue and direction is the best I've seen in ages. The theme tune is stuck in my head. Quincannon and the angels are three of the finest characters to appear in fiction for many a moon. It was in the wider plot and narrative pacing that I was thrown into uncertainty for the duration of the series, and the finale on Monday sadly put the nail in the coffin of my concerns. It will take a heavenly being of considerable power to resurrect my hopes in season two. And yet. And yet... The mere fact that I am considering watching the second series says it all. This was a beautiful, foul, flawed failure that engrossed me despite my better intentions. Goddamnit to Hell.

Bonuses : +1 for every time Cassidy or Tulip or Quincannon opened their mouths ("yeah.." has never been so threatening); +1 for some superb filmmaking as described above, and also some excellent sound; +1 for a rich and complex world-build full of characters with mysterious actions and backstories

Penalties : -3 for taking the above world and characters and f£@%ing it all off seemingly without a care; -1 for talking the talk of big cosmic and religious revelations but fudging it for some silly gags and vagueness

Written by English Scribbler, no stranger to neither Bible classes nor desert roads and worrying Texan lawmen, and NOAF contributor since 2013