You'll want to set aside some time in your calendar to do nothing but read this book... 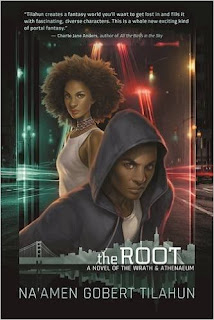 Erik thought things were weird enough being a former child television star and current social pariah having to navigate bullying and a home life that's…well, not exactly the most peaceful. When he finds out that he has honest-to-goodness super powers and is part of a conflict stretching back into prehistory? Well, what defines "weird" officially changes. And it kicks off an adventure ripe with secret organizations, parallel worlds, mysterious and hungry darkness, and more hidden agendas than a dozen spy movies. In short, it's a lot of fun, with a chorus of amazing voices and characters, a deep and interesting setting, and a fast pace and brilliant action with just enough tragedy, romance, darkness, and hope to keep me glued to the pages and grumpy af that I have to wait for the next book to come out.

If it sounds like that is a lot to fit into one book, I kind of agree with you. It's not short and it is full. Mostly it splits its action between two parallel stories. In the one, Erik is learning about his powers and the political situation on Earth between the Organization and the Agency, two rather faceless entities that come down on opposite ends of an ages old feud between the children of the gods. In the other, Lil is being trained in magic languages in Zebub, a dimension that mirrors Earth but that is being attacked by a mysterious and deadly force. In both settings, powers determine hierarchy and privilege, and in both children are being trained as warriors to fight in this ancient war whose origin has been lost through conflict. And having the true origins of this war be lost is an interesting choice because at the same time that it allows the characters to sort of handwave the particulars away as "unknown" it also means the reader isn't bogged down with how all these religions could possibly be brought into one explanation. It might not be the most satisfying for those really wanting to dig into how it all works or got started, but for me it was a way for the book to say "hey, try not to think too hard about that and maybe look instead at all the awesome and off-the-wall shit happening." Which worked for me because that's the situation Erik finds himself in, having to put aside his questions in favor of trying to do good now.

It's also a lot to fit into one book because there's a lot of things to keep track of. The plot is split between the two storylines that slowly converge but there's also a number of viewpoints within each storyline that fleshes out the worlds and offers some hints and insights into things that the main characters aren't aware of. Juggling so many perspectives is by no means easy but the novel pulls it off with style, giving each person a unique voice and mission, popping into certain characters' heads only once before darting away to the next thing. None of these asides from Erik or Lil felt insignificant, though, and each helped to push forward the plot and solidify various motivations and intrigues slowly simmering in the background. For all that Erik and Lil take up most of the real estate, this novel is about factions and loyalty and betrayals, something that the jumping around helped me keep track of and which made the individual personalities that much more real and compelling. The personal beats are definitely present, the jealousies and the budding loves and the everything.

And can I say that I just love all the different relationships and people in this book? Because it is amazing to me to find a book with such a diverse cast, where queer characters outnumber straight ones, where characters of color outnumber white ones. I love all the ways the characters connect and form friendships and rivalries and alliances. The way that Erik starts to have feelings for his mentor while still dealing with the shit from his impressively dramatic breakup with his first boyfriend who ended up in jail because of it. The way that Lil finds herself coming into her own power and her own feelings and sexuality and there is just so much to like about this. I want more, okay? I want whole books that explore the side characters because they are so alive. No one is treated as disposable, as flat. They all have inner lives and inner fires and I want to see them all get their own books. Their own series! Their own shared movie universe! And I might be getting ahead of myself a bit but seriously this is about the most fun I've had with a book in a long while.

And really this is one of those reads where most of my frustrations stem from the fact that it's the first book in a series. That the world building could have been a bit clearer to me in parts didn't really bother me because I expect the lingering questions to be answered in future books. What exactly happened to sever the Blooded from their Zebub counterparts is hazy but I'm guessing that central mystery will push forward the overall plot of the series, and the book definitely earned my trust that it will be awesome when the reveal eventually happens. Similarly, the book covers a lot of ground and in doing so seeded a lot of conflict that didn't exactly get a chance to breathe. Just when it seemed like some hinted-at plot was about to be revealed something completely different would happen and kind of shatter my expectations. Which again, I liked, but it did mean that by the end there was a whole lot still hanging in the air that didn't feel resolved. This gives a lot of momentum going into the rest of the series but I fear this might mean I will definitely have to reread this first book directly before the next to be able to remember all that was going on. Which isn't the worst problem to have, I'll admit, given how fun the novel is.

In the end, I think the novel succeeds magnificently at setting the ground rules for the setting and revealing an amazing cast of characters and just enough of the world to make for a compelling and deep experience. While there are a few things that are left to be ironed out in later books, this first taste has left me ravenous for more and I very much look forward to seeing where the series leads.

Bonuses: +2 for OMG ALL THE QUEER CHARACTERS AND RELATIONSHIPS :D

Negatives: -1 for not tying up loose ends so much as throwing a dozen news threads into the mix at the end of the book

Nerd Coefficient: 9/10 "very high quality/seriously go read this now and then weep that the second book isn't out yet" see our full rating system here.