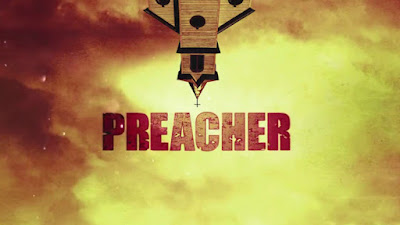 Note – This review is of the TV show in isolation. I have no familiarity with the comic and have not watched any of the background Talking Preacher series.

Outlaw Jesse Custer has returned to his hometown in West Texas, to follow his father’s legacy as the local preacher. But you can’t always leave your past behind and, imbued with a unique power, Jesse seeks to find himself and God while saving his community.


The Netflix original series Stranger Things is getting a lot of traction for its tug on the nostalgia strings of fans of 1980’s sci fi films starring groups of children riding bikes. To me, Preacher does something of the sort for the wacky and weird 1990’s cult classic films. The style is very reminiscent of early Quentin Tarantino, from artistic gore to block letters flashed across the screen.

One thing that Preacher takes some hack for is that it starts of a little slow and confusing. This is true, but to me that is almost quintessential to this 90’s cult weird feel. No one understands the opening scene of Reservoir Dogs the first time they watch it, and they’re lying if they say they do. I, like most of you I’m sure, used to roam the aisles of my local Blockbuster looking for the wackiest, weirdest, most artsy-looking gem I could find and Preacher fits right in among this bunch. 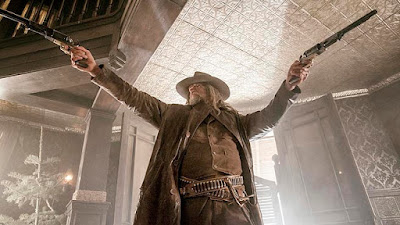 The cinematography is beautiful. One of my favorite film techniques is the artistic use of camera angles, where the stills from these shots could be framed and hung on your wall. Preacher does a great job of this and it is easy to see the homage to comic medium. This was one of my favorite things about the late 90’s anime TV series Trigun, and I’m happy to see a show today employ this technique. I think it is very underutilized now-a-days – ya know, when the kids get to walk downhill both ways in nice weather. Who am I kidding, kids don’t even go outside today, let alone walk anywhere. I digress.

Obviously, Preacher is about Christian mythology. And by mythology I mean angels and demons and the like, not the actual Religious beliefs. But it is chock full of religious philosophy too. This is another late 1990’s early 2000’s nostalgia pull – remember Dogma, Constantine (film), The Order, etc, not to mention hit books like Angels and Demons and The Da Vinci Code.

The acting in Preacher is superb as well. Ruth Negga’s portrayal of Tulip is breathtaking and the show really takes advantage her skill by presenting only her face on screen for a number of seconds where Negga can tell a whole emotional story through her expressions. Tulip is a bad ass character from the get go, and as the season progressed the viewers became more in tune to her motives and her relationship with Jesse. Coming off as hard and brash at first, Tulip opens up (pun not intended) once we start to learn of her past and see her caring for others. We also get to finally see Jesse crack in regards to Tulip and it is incredibly heartwarming, despite being juxtaposed with death and gore and torture and the like. I also really like how Tulip and Emily (the BAMF choir girl mom) become friends of a sort, and especially how Tulip shows compassion toward her. It’s nice to see two female characters be more than simply dueling love interests for the same man.

The best dynamic in the show is either between Jesse and Cassidy, his Irish vampire of a best mate, or between Fiore and DeBlanc, the rogue angels from Heaven, I can’t decide. Jesse and Cassidy have a shared hot mess-ness about them but Fiore and DeBlanc have a sort of deep love which becomes more evident as the show progresses. Regardless, the chemistry between all of the main characters is terrific, even when they are just all sitting awkwardly at a kitchen table.

There are also a lot of characters I haven’t even touched on, like Eugene aka arseface and Quincannon the Napoleonic. All and all though, it’s the weird artsy 90’s cult film nostalgia that gets me with this one, and if you’re in to that I think you could be in to Preacher too. I mean, how can you not with the greatest fight scene ever filmed.

Bonuses: +1 for weird cult artsy 90’s film style, +1 for the Tulip/Emily relationship, +1 for a truly well rounded bad guy that is still very easy to hate

Penalties: -1 for the slow start

Nerd Coefficient: 8/10 “well worth your time and attention

POSTED BY: Tia   ...aspiring couch potato and Nerds of a Feather contributor since 2014