Not sure how it all started, but my annual write-up of San Diego Comic Con has taken the form of Top 3 lists in the past couple of years, so I thought I would continue that tradition.  I first of all want to thank the staff and volunteers who help make SDCC as good as it can be.  From the extra police who help direct traffic, to the volunteers who make sure that line integrity is intact, the collective work of these individuals ensures a good time for the nearly 130,000 attendees. 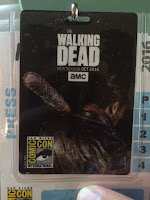 1. RFID - This year SDCC, after testing it at Wonder Con, debuted badges that were RFID enabled.  Attendees had to scan in and out of the convention center to verify that their credentials were legit.  Fans were worried that it would create delays and that there would be major issues, but I did not see one person who had an issue with the system.  I also noticed that it seemed less crowded and wonder if the new badges helped cut down on counterfeits.  I think it is safe to say the new system worked great and is here to stay.

2. Hall H Wristbands - For the first time in my SDCC career, I joined a group to obtain Hall H wristbands.  While there was minor drama during the issuing of wristbands in our area, the expectations seemed clear, the staff were all very polite and well informed, and the other attendees who camped out near us were a delight to be around.  While some people do camp out all day and overnight, one person can hold the spot for up to five individuals so many groups operated in shifts.  Once you have the prized wristband you are free to return to your hotel and are guaranteed admission the next day.

3. Lotteries - Everything came down to chance this year.  If you wanted a Hasbro exclusive or an autograph at the Warner Brothers booth, you had to line up early, proceed to the Sails Pavilion, and hope for a lucky draw.  This was an effort to prevent camping out for exclusives and to allow attendees the same odds as exhibitors and it seems like it will remain.  I was successful in an online lottery for the Funko booth and also was successful getting a Conan Pop! through this system.  Hooray for me! 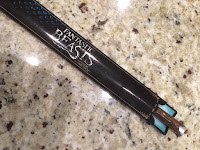 Top 3 Panels:
1. Warner Brothers - I was one of the few individuals who went through the effort to get a Saturday badge and bail after one panel.  Despite not getting the most bang for my buck, this panel absolutely blew me away.  Moderated by Conan O'Brien and featuring a line-up that included Suicide Squad, Wonder Woman, Lego Batman, Harry Potter: Fantastic Beasts and Where to Find Them, and more, fans were treated to a series of amazing trailers and brief conversations with the directors and stars.  The highlight was when Eddie Redmayne, who portrays Newt Scamander in the film, helped pass out over 6,000 wands so we could cast a Lumos Maxima spell to brighten up the usually dark Hall H.  I have chills just thinking about the site of the entire Hall H population raising their wands in the air.

2. Lego Dimensions - While I am a fan of Lego Dimensions myself, I attended this panel to get my son an exclusive Green Arrow figure and bring him the inside scoop of what the future held.  Moderated by Kinda Funny's Greg Miller, the panel was full of laughs and surprises and was a pure delight.  Miller had a great report with the creators and the tone was light and fun, just like the game.  They also brought out a pair of legendary voice actors in John DiMaggio, who I love as Bender, and Roger Craig Smith, the voice of Sonic.  Fans don't have to worry about purchasing another starter kit for at least two more years, and the next year will bring fans the new Ghostbusters, Harry Potter (both classic and Fantastic Beasts), Sonic, Adventure Time, Goonies, Gremlins, and more.  The number of licenses that they are including that will appeal to both parents and kids is absolutely amazing.

3. South Park: 20th Anniversary - Featuring a clip reel that informed us how many times Stan has thrown up, Randy has been arrested, Kenny was killed, Cartman took a dump, and more, this panel was a pure delight from start to finish.  It was great to hear about how a viral video that was spread through VHS copies in the mail grew to one of the most dominating pop culture forces in the world.  My favorite anecdote was how they already had the perfect story for Pokemon Go, when the Chinpokemon that the boys included tacking chips so that the Japanese government knew where the American children were.  They plan on suing Niantic for stealing the idea for their game from a cartoon from 1999.  They may have been joking about that one. 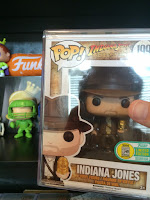 1. Indiana Jones Funko Pop! - This was my grail item, pun intended, and thanks to my preview night wristband he is all mine.  I barely made the cut as he was down to single digits while the friendly Funko staff was loading up my bag.  He immediately made his way into a protector and is happily on display in my home office.  While it has been confirmed that Disney Parks will carry an Indiana Jones Pop! at its attractions, the one with Indy holding the idol was only available at SDCC. 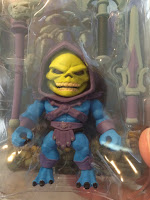 2. Skeletor from The Loyal Subjects - I started collecting the action vinyls that TLS makes this year and had the good fortune of not only securing this, but attending a TLS dinner that was all about collectors.  It is clear that TLS cares about its collectors and is creating some of the best toys on the market. 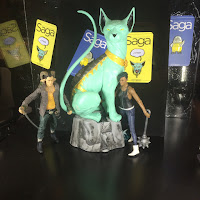 3. Saga Action Figures - When I saw that the Skybound Booth was going to carry a two-pack of Marko and Alana I knew I wanted them.  I planned on passing on them as I felt I had spent enough on my annual journey, but as a buddy of mine and as Lying Cat pointed out, I was lying.  I picked this pair up on Saturday and am thrilled to have them in my collection. 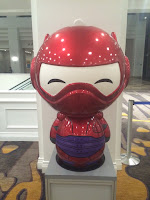 1. Funko Fundays - Being one of the lucky few to get pulled off the waiting list after it sold out in seconds, I was able to attend my third Fundays.  Through the kindness of another Funatic (the term for those who participate in the Funko forums) I was able to join his family and have an absolute blast.  Funko changed the format to keep fans from battling each other over the exclusive prizes, and brought out all of the stops as they entertained over 1,000 of their fans.  The highlight to me was when they passed out Funko bars to the fans, four of which contained golden tickets for a tour of the Funko headquarters.  This all occurred as Oompa Loompas danced down the stage and the Funko CEO was decked out in Willy Wonka attire.  While I didn't win, it was clearly one of the best promotions I have ever been a part of.

2. The Conan O'Brien Show - I had the good fortune to get tickets for the second year in a row for the taping of the Conan O'Brien show at SDCC.  As usual both Conan and Andy were hilarious.  The taping I went to included Nick Kroll, the stars from Arrow, The Flash, and Supergirl, with a musical performance from Weird Al Yankovich. This show was made to be taped at SDCC and I think it has been confirmed that it will return for a third year.  I wouldn't be surprised to see other shows follow suit as this has been wildly successful. 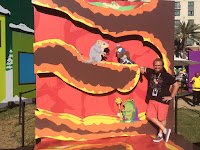 3. South Park: 20th Anniversary - While basic in nature, the South Park off-site allowed fans to take pictures in iconic scenes from the 20 years of this show.  I was able to take my picture on the famous couch, with Awesome-O, in prison at Casa Bonita, and more.  It included fake costumes and props from the show, which was hilarious, and even had a brief shout out to Canada as you exited the event.  Each scene was extremely well made and the workers at the event all happily took your picture and did a great job.  I would love to see other events as simple and effective as this moving forward.