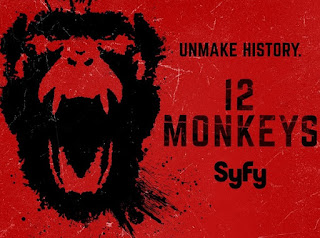 Tonight is the season finale of SyFy's 12 Monkeys (Season 2), leaving a giant splinter machine-sized hole in my life. Now normally, I’m not a fan of time travel sci-fi. I find that the logic is often unsound, the reasons for travelling often flaky, and that it is always full of too many awkward “I can’t let myself/my loved one/etc. see me” moments. I am also not usually a fan of apocalypse sci-fi either, primarily because it’s been so overdone these days. But 12 Monkeys is so much more than time travel and apocalypse; it’s a story of love, sacrifice, and self-preservation. It's about the human condition.

In case you haven’t been watching, 12 Monkeys is based off of the 1995 movie of the same name and is set 30(ish) years in the future. A biological apocalypse has struck the planet, and only those immune to the virus have survived; but the virus is constantly mutating, and soon even the immune won't be safe. Bitter and anguished over the loss of loved ones (and culture) and fighting for the few resources that remain, the survivors band together into clans/colonies. One such group includes those under the direction of the brilliant scientist Katarina Jones (played by Barbara Sukowa), who succeeded in her life’s ambition of creating time travel, but at much cost. In a quest to undo the plague and the loss of her daughter, Jones follows clues from the past to devise the present mission. One of those clues involves James Cole (played by Aaron Stanford), who must be the one to travel through time and stop the plague, and Dr. Cassandra “Cassie” Railly (played by Amanda Schull), a CDC employee who left a cryptic message for them before her death in 2017. Cole’s first mission begins by travelling to 2015 to find Dr. Railly before the plague hits, forever changing both their lives, but not in the tired butterfly effect way normally associated with time travel stories. The fully loaded Season 1 ends with Cole sending a badly wounded Cassie to 2043 so Jones can save her life.

Now in Season 2, Jones and her team have bigger fish to fry than the plague, which’s effect they were able to squelch somewhat but not by any means prevent from happening. This season focuses on the team trying to save time itself, which is being eradicated by a figure known only as the Witness, causing the destruction of, well, everything. Cassie has become hardened in the future, wracked with guilt over the death of her ex Aaron and eventually the disappearance of (a-hole) Ramse’s son. Cole blames himself for ruining her life, but Cassie constantly reminds him that she’s not a 'kitten stuck up a tree' (-Ani) and that he doesn’t get any of the credit for her life and or the choices she makes. This is a wonderful segue into the reason I love 12 Monkeys so much: super stellar character development and acting. The show stars three incredible female characters, Jones, Cassie, and Jennifer – the latter being bat-shit crazy and totally embracing it. But these awesome women don’t fall into the now age-old trope of being ‘strong female characters’ because they are essentially honorary men or perfect human specimens. In 12 Monkeys, Jones is a brilliant scientist, a leader, AND a mother. Cassie is an incredibly smart and well-renowned doctor, but she is also a complex and deeply flawed character, and is borderline unlikable for most of this season. And Jennifer, well, words can not describe her, but if you watch, you know – and here is where I give props to Emily Hampshire, whose portrayal of Jennifer Goines is breathtaking.

Most importantly, I think, is that none of these women are the objects of men. Yes, they have relationships here and there, and it is painfully obvious Cole and Cassie are deeply in love, but there is no objectification, no nudity, and no sex (mostly).

But I can’t just talk about the ladies because all of the characters are complex, well-developed, and extremely well-acted. James Cole is by far my favorite (fake) human being ever, and his relationship with Cassie is heartbreaking and believable. The scene where the two finally do admit their love, to themselves and each other, is beautiful and perfect and how every love scene should be. Gratuitous sex for entertainment purposes has its own genre, and it is nice to see a show, SF/F or not, that relies on its story and characters to buy viewers, not boobs. For the record, I was kind of expecting their ‘union’ to save the world but it didn’t (at least not yet), and that’s what I love about this show - it doesn’t give you the expected, it’s not the same old tired tale. You see, Cole and Cassie were on their final mission, sent back right before the fissure in time destroyed Jones and the time machine, and if the two failed the world would be lost, though a sliver of hope rested in (a-hole) Ramse’s hands, who is attempting to find and kill the Witness. But Cole and Cassie failed, and Ramse failed, and who knows what is going to happen next. One of the big questions to be answered tonight is: who is the Witness? I think the answer is pretty obviously Ramse’s son, but we’ll see. So far 12 Monkeys has really kept me on my toes. 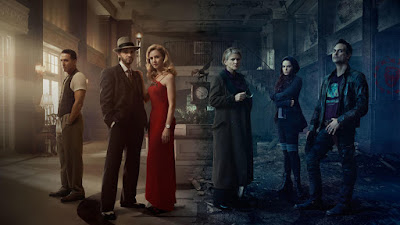 Whatever the outcome, 12 Monkeys is by far one of the best televisions shows on air, which is saying a lot considering the plethora of great shows in this Golden Age of TV. Hopefully, if you aren’t watching it now you will be soon.

Bonuses: +1 for 'strong' female characters who are more than honorary men, +1 for taking 2 seasons to fully develop Cole and Cassie's relationship, and +1 for presenting Jones as a scientist and a mother, both through her own choosing.

Penalties: -1 for Ramse because I find the both the character and his portrayal irritating

-----
POSTED BY: Tia,  aspiring couch potato and Nerds of a Feather contributor since 2014