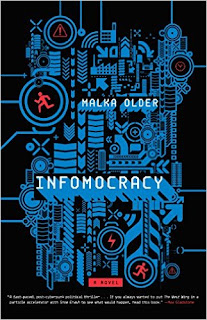 Elections. I can imagine almost no better fodder for a sort of dystopian nightmare, especially given the current state of politics in the U.S. And yet to call this book dystopian is, in my mind, to completely misunderstand it. There's a heavy vein of corruption present in the world that is revealed through the pages of the novel, yes. And there is an at-times gritty, cyberpunkish feel to the way that borders change and information (and Information) is used, controlled, and produced. There is prejudice and there is violence. But in many ways, to me, this setting is something much closer to a utopian vision, a world that believes in elections and the power of a single vote. A group of characters trying to create the best system they can, and even if they are unable to eradicate corruption, trying to contain and minimize its impact. And so given the state of politics in the U.S. and in some ways globally, this book could not have come at a better time, to provide a breath of life and hope into a situation that often feels hopeless.

The premise of the novel is instantly captivating, a world where geographical nations largely have been phased out. Where countries and even cities have been broken up into grids based on populations. Where voting is done electronically and globally, an enormous amount of political parties vying for the time and attention of the world. At stake: the Super Majority, a place of dominance and power for whichever party can achieve it. To mitigate the chaos and keep things fair and balanced: Information, a non-profit that exists solely to try and provide bias-free data and fact-checking to everyone everywhere. This is a world whose population is almost always connected to the net via implants and devices. Where Information can act as augmented reality, checking the veracity of spoken statements to billboards to net advertisements on the fly.

The novel structures itself around a few key players in the latest election cycle, only the third since the global experiment was initiated. And things aren't exactly going as planned. There are a great many political parties. There's choice. And yet the same corporate party has taken the Super Majority both elections, and looks poised to take another. The novel does an excellent job of showing the trouble with democracy, and even microdemocracy. The problems of incumbency and name recognition. Of funding and apathy. Of corruption and manipulation and outright tyranny. The characters are well chosen—a high-ranking agent of Information, a lower-level member of a policy-driven political party, and something of an anarchist. Each approach the election differently and each is drawn into the intrigue and action differently.

For all that the novel flits between a few different characters, though, it's Mishima, the Information operative, and Ken, doing groundwork for Policy1st, that become the main focus of the story. And through them I feel like the novel really examines the heart of the issue: trust. That they begin a sexual and then romantic relationship is well handled, but more powerful to me is how they do so without fully trusting each other. And how that dynamic pulls back to how people view and interact with politics and governance. Because, really, people have little reason to trust governments. Corruption has become such a part of politics as we know it that even in this imagined future where Information is prevalent and everyone votes it is not gone. And yet trust is vital to governing. Trust is vital to pretty much any non-abusive relationship. The story becomes about working through mistrust, misunderstanding, and misinformation, to come to a place where people can actually work together, can find joy and compassion and genuine optimism.

It's not an easy road. There are stabbings involved. There are plots to undermine the entire system by altering Information or bypassing it entirely. There are acts of terrorism, natural disasters, a slew of false starts and messed up Election Day shenanigans. The characters battle with spreadsheets and data as their weapons, as well as occasionally fists and guns. And it's not a single plot that needs to be foiled but rather a multitude of abuses that need to be prevented or minimized. The pacing is tight, the characters interesting and alive, and the world at stake. It is, in other words, a wild ride of a novel with a vivid imagination and an indomitable optimism in the power of people to do the right thing. I loved that Information here is a proactive force, bureaucratic and labyrinthine and yet able to do good and fight corruption, even within itself. Like Star Trek's Federation, it's not without flaws but is trying and, ultimately, able to make positive change by giving more power to everyone, trusting that the more people have a voice in governance the better it will be.

There were only a few places where I stumbled a little in reading through this novel. For all that it's fun and fast and politically minded, I did struggle a bit with Domaine, the man fighting against democracy. Not necessarily because I wasn't really sure what he really stood for, but because the novel spends much more time on Mishima and Ken. Like with politics, it does matter who gets more screen time, and Domaine's voice felt just a little lost to me in the sea of other voices. But I did enjoy how the novel worked in so many people, how it worked by showcasing that only with a diversity of voices can corrupting forces be defeated. Only by refusing the be isolated, only by reaching out, only by trying to trust, do the characters carry the day.

And really, this is a novel that sells the power and the hope of voting. In today's political landscape, it stands as a voice of hope among so many people feeling discouraged. It's a call to push for change. To stand against corruption. To fight for a better future. To be a global citizen. It crafts a driven narrative with a wonderfully complex climax and features a nicely balanced and diverse cast of characters. For those looking for a politically minded science fiction to make you believe in elections again, definitely find some time to read this one before November.

Bonuses: +1 for that stiletto to the thigh (I think I laughed out loud which probably makes me a terrible person, but there we are), +1 for a nicely handled romantic subplot between Mishima and Ken

Negatives: -1 for perhaps not enough attention paid to Domaine