Yes, you can judge a book by its cover 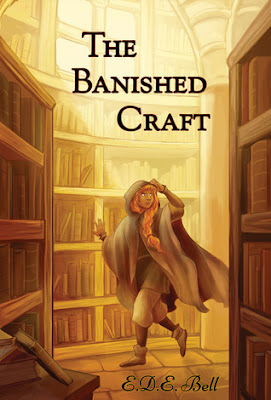 Inspired by Zhaoyun's reading resolution, I chose to read this book firstly because of its cover, and then because of the publisher description:


The Banished Craft is a genre-bending fantasy saga that follows the adventures of Cor, a woman caught in a dying world that does not accept her, and Atesh, a dragon scientist who's been asked to violate his own ethics or put the lives of his family at risk. Follow their trials as they deal with a shattered world, mired in political upheaval, while they try to rediscover a lost magic. The Banished Craft begins the Shkode trilogy: a quirky and modern take on dragons and wizards, exploring themes of identity, prejudice, violence, compassion, and the ways we are all connected.

This publisher description leaves some pretty big expectations, and The Banished Craft does not fail to deliver.

Unbeknownst to its inhabitants, the triverse has been damaged by an event that caused it to split into two parallel realms or spheres, one inhabited by humans, and one inhabited by (personified) dragons. The human world, Teirrah, consists of  Marshstate, Cavestate, Seastate, and Farmstate, each with its own distinct terrain and culture. Naturally, the terrain corresponds to the state name (Marshstate is boggy, Seastate is seafaring), but each state also has its own way of life. The problem is that Teirrah is now unified under singular rule and the laws and customs enforced by Gardenia (part of Farmstate) are oppressive and inconsistent with the various cultures at hand. Primarily, in Teirrah women have no rights. They are not allowed to own or buy anything really (including books) and are not allowed to live in a house without an adult male.

Cor, the bronze skinned and red-haired protagonist featured on the book’s cover, will have none of this. She recently moved to Farmstate in an attempt to make her way into the university library, a place that is forbidden to women, to find out more about her parents' deaths. Cor is such a fantastic character and through her E.D.E Bell brilliantly captures what it is to be a woman, and to be different. Cor is not often taken seriously by her male peers, but ironically is treated with a little more respect by the older men she encounters, which may be an allegory for naivety.

And when I say Bell brilliantly captures what it is to be different, I mean that she does it on numerous levels. In one scene Iohn (Cor’s male ‘friend’) chides her dietary choices, stating she is alienating herself from the rest of society through the food she eats, or doesn't eat. (Try going out with friends while not eating meat or bread, or not drinking beer, and I guarantee you’ll hear this at least once.) In another scene Cor is called black, which completely baffles her: "Black? Her skin was a muted copper—she was no more black than the man in front of her was white.”

All this talk about Cor would make you think she’s the only character in the book, but that’s not remotely true. Cor isn’t even the only incredible female character. There is also Francie, the Grande Dame of Teirrah, who uses her privilege to help those in need. And Ma'Bay, a doctor from the Marshstate who has devoted her life to caring for her community. But it's not just a book full of strong female characters either, all the characters, both male and female, human and dragon, are complex and determined and well developed.

And I've only really talked about the human sphere. There is a whole parallel story running throughout that takes place in Arev, or the dragon sphere, which is just as nuanced. Both worlds are on the brink of political upheaval and there is a tension that permeates both storylines that keeps them engaging.

It is impressive that with all the character arcs and parallel universes, the book never feels crowded or rushed. Admittedly, I always longed for more Cor, but I never tired of reading about the other characters and other worlds. The multiple arcs serve as a world building device that creates a complex and layered universe (or triverse I guess) that leaps off the page. I want more of The Banished Craft world. And I want a wiki for it.


There are many highly promoted big publisher books that are supposed to be amazing and diverse and whatever that…fall flat, to say the least (I'm thinking of one in particular). Then, there are books like The Banished Craft which are small budget, crowd sourced, and independently published that are superb.

I highly recommend you give The Banished Craft a try. You can buy the e-version here for a relatively low price. In fact, I was so impressed with The Banished Craft that it was one of just two novels I put on my Hugo ballot. Lucky for us all, the sequel has been funded and we should hope to see it sometime in the fall.

Bonuses:  +1 for seamless integration of multiple character arcs and worlds, +1 for capturing the true feeling of being different in a way that didn't seem forced or exaggerated

---
POSTED BY: Tia  who hasn't read a fantasy book of this sort that was so impressive in a really long time