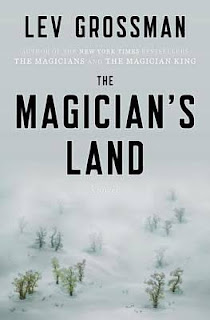 This review may contain general plot spoilers for the previous two books: The Magicians and The Magician King.

The Magician’s Land is the most mature installment in Grossman’s series. Quentin has grown up a lot in the 12 or so years that this trilogy spans and he is no longer whiney or shitty. Quentin has been kicked out of Fillory, but instead of brooding on the unfairness of it all like he would have in the past, Q picks up the pieces and heads to the one place that feels remotely like home…Brakebills. And here we finally get what the first book was lacking, and that is Brakebills as a character. Previously, Brakebills was always just a setting, the building the crew attended classes in. But now it has a different feel with its magical passages, danger zones, and to the pride of all, first ghost.

Though Quentin has matured a lot, he hasn’t lost his sense of adventure. His quest in this book starts out academic, but life loves to through Q curve balls and he finds himself out on the street once again. Luckily he, along with an acquaintance, was recruited into a proper adventure, which includes one of my top 5 favorite passages ever. It involves a rag-tag group of magicians flying out of a window on hastily animated found objects:


They swarmed out through the empty windows like angry bees out of a hive. Plum and Stoppard rode leather club chairs; Betsy had a small prayer rug that had been in front of the fireplace, which she handled standing up, surfboard style; Quentin got the penny-farthing bicycle.

This scene continues on and is absolutely hilarious and wonderfully self aware, and through the absurdity of it all, Grossman is somehow able to capture the tension and anxiety required of a proper chase scene. If you have been following along, you probably won’t recognize any of the characters in the excerpt above, except of course Quentin, and that’s because here in the final installment, we get a whole new cast of characters. This always makes me nervous since getting to know someone new is never easy, but again Grossman does not fail to deliver. Plum, a Brakebills senior with a secret of her own, become a fairly predominant character in this book and her POV is entertaining. One of my favorite things about Plum is that she thinks the idea of having sex with Quentin is ‘gross’ because he’s so ‘old’ and one of my favorite things about Quentin is that the idea of having sex with Plum never even crosses his mind. This is incredibly refreshing in an era where women in media are constantly and disproportionately romantically paired with older men.

So we get some new characters here, but we also get to learn a lot more about our old friends. Grossman gives us both Janet’s and Eliot’s POV and despite my reservations, both hold up well. At first I wasn’t quite sure whether either of them could hold their own as POV characters for very long, but Grossman keeps it short and doesn’t try to scrape anything out when nothing is there. It was actually kind of nice to get to know Janet a little better and the story of how she got her badass axes was terrific.

There’s still more I could go on and on about but I don’t want to give anything away. Overall, I was extremely impressed with this series. In fact, It’s the only one I’ve read where there isn’t a book I like more than another. Each installment was as good as the last, none overshadowing or failing to live up to its predecessor. My only real complaint with the entire trilogy is the distasteful rape scene. I know why it’s in there but I don’t agree with it. I think it is partially because rape is used a plot device so frequently that I can no longer forgive it. As a media culture, we need a break from that trope. But, I loved this trilogy so much that I won’t let that one scene bring it down for me. I will reread it, but when I do I’ll just have to red wedding that chapter, because some things, like the red wedding, need only be read once and never be read again.

Penalties: I really haven’t got any.