Covering a decade of amazing fiction 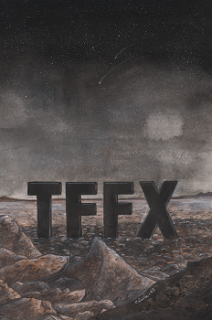 Sometimes "Best Of" collections don't exactly feel earned. Like watching a clip show in the first season of a show (I'm looking at you, Star Trek TNG), there's just not a feel that there's enough to really justify doing a compilation of highlights. For TFF-X, though, that is definitely not the case. Celebrating ten years of The Future Fire magazine, this Best Of anthology is picking from a huge range of stories, the result of which is an experience that is lifting and shattering, that shows just what good work the publication has been dedicated to since its inception. Really, The Future Fire has put out some amazing fiction, poetry, and art, and this collection touches on each of those, always centering progressive and political speculative visions. I suppose it's no surprise that the same people responsible for We See a Different Frontier, which was my first ever review at Nerds of a Feather and I believe the only perfect score I've given in my time here, would once again impress with a walking tour through the publication's catalog.

It's almost surprising how thin the collection is considering just how many stories and creators are contained within. This is one of the longer table of contents that you'll see in an anthology and yet there was no moment when the collection felt bogged down or too heavy. The stories (by and large) are on the short side of things, which serves two purposes incredibly well:

First, it gives a taste of the great range of stories and poems that have been published at The Future Fire. There are similarities that link some of the pieces, thematically and tonally, but there is also an incredible diversity in voice, in setting, in form—there's always something new happening with the stories, new complications and sensations and keeping the selections short means that none dominate too heavily, that this is a collection of equals.

Second, keeping the stories short left me wanting more. It made me hungry for these stories, for this publication, and it made me want to track down further content at its source by letting the anthology act as a tasting menu to inform where I'd want to dig deeper. Of course, while I liked that aspect of the selections it also led me to my basically one and only complaint, which was that a number of the stories are sequel pieces and while I didn't have any trouble following, I felt there was a time or two when I might have lacked a proper context to what I was reading. But the stories more than made up for any confusion on my point.

And okay, yes, the stories (and poems)(and art)! With so many included I can't do justice to all of them, but the quality is phenomenal. Starting with "Nasmina's Black Box" by Jennifer Marie Brissett, a story of tech and power, understanding and empathy and a little girl finding out just how hard the world can be. The story combines a vivid setting and cast of characters with a brutality only a child can present, a world of monsters and wonders, death and life and everything in between. It's one of the longer pieces of the collection, and it's a good way to lead. The story acts as a sort of primer for the rest of the collection, all the joy and the loss and hurt and hope captured here with Nasmina's story.

"Shadow Boy and the Little Match Girl" by C.A. Hawksmoor tells a story of a person fractured and hurt, the people a single body can contain. The setting is luminous and striking, the action about longing and loss and distance. In that it's echoed later in the collection by James Bennett's "Half Light Love," which features a man revisiting his past and his conceptions of sin, the love he might have had and that he didn't understand. Both stories are beautiful historical fantasies thick with promises kept and broken. With the time it takes to heal. And I rather love them both, the way they slow things down a little, though neither is very long. The later piece is definitely the more erotic, but they are both sensual pieces, about people navigating a world they aren't sure of.

Just as there are quiet tales of longing and sorrow, though, so there are more forceful tales of justice and violence. "Mermaid Teeth, Witch-Honed" by Benjanun Sriduangkaew tells a visceral story of indoctrination and discipline. And "Art Attack!" by Mark Harding tells a story of a future where things are a bit bizarre and art has been perfected for consumption. And there's the subverted fairy tale of "Reflection" by Jessica E. Birch about beauty and passing on abuse. About how teaching people to chase after a fading dream is damaging and dangerous. These stories keep the pace of the collection moving along, injecting a bit of blood into the punch for a hint of that metallic tang.

And the story draws down with a moving grace, starting at about "Drown or Die" by Therese Arkenberg, a story about human life and human cost. About wrecking a world and reaching out to take more. About legacy and about preservation in the face of a seemingly inevitable march. It's tragic and it's sad as hell and it marked not the first time I got weepy in this collection. But it also stands as a stark warning, one that seems more and more relevant with each passing year. And the story makes "Ephemeral Love" by Melanie Rees its final piece, a story with great ties to "Drown or Die" but with a very different outcome. Where the human element has been removed and the world can heal, and one being holds the power to start things up again or let a different pattern develop. It's a great way to close out a stellar collection.

And in the end TFF-X does exactly what it sets out to do, which is celebrate the publishing history of The Future Fire. From crushing tragedy to indomitable revolution, the stories all burn with hope. Hope that a future exists where people will learn from their mistakes and do better. Hope that there is a future worth fighting for and that we are equipped to fight it. Hope that for all the harm humanity is capable of, there is equal good, if only people would stand up together and work for it.

Bonuses: +1 for an impressive range of progressive, political speculative fiction, +1 for not forgetting the poetry or the art!

Negatives: -1 for including a few sequels without the original stories