War is hell, but this collection is worth the heat. 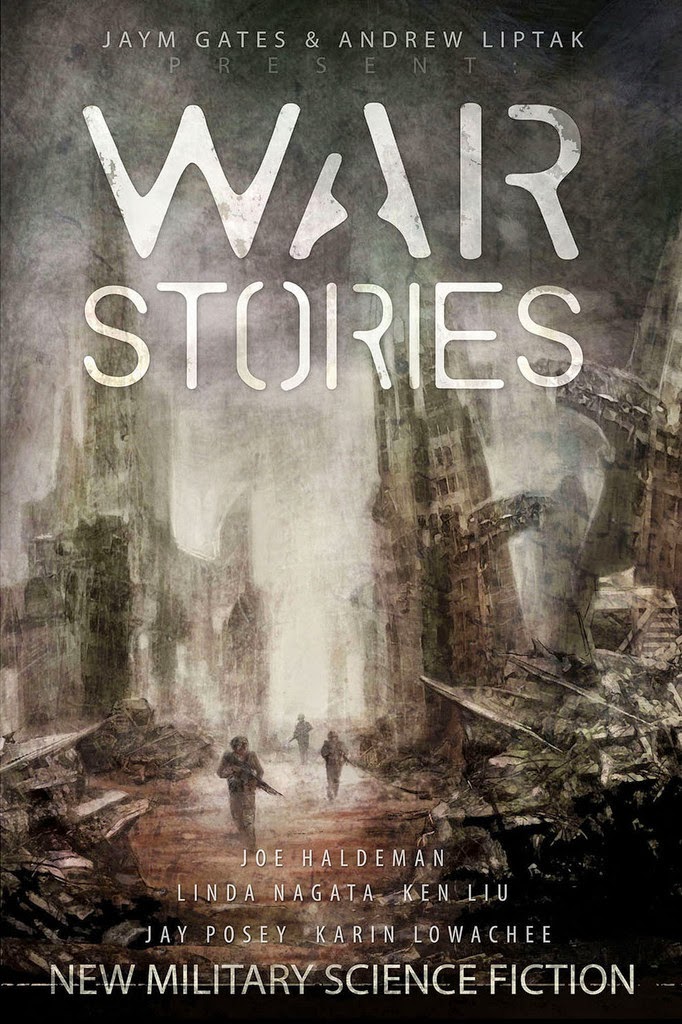 I think I should start all of my reviews of themed short story collections with the sentence "Theme collections of speculative fiction can be tricky things." It was true when I said it about the last collection I reviewed and it is true now and it will be true regardless of how many theme collections I read. But the great thing about War Stories is that it knows what it wants to do and goes out and does exactly that. The focus is narrow while not being limiting. These are science fiction war stories. Specific, but at the same time opening up to an impressive variety of stories that cover the science fiction spectrum, from near-future Earthbound battles to far-future off-world wars that ravage entire interstellar civilizations. In short, it takes its premise and runs with it.

And the path runs in a mostly logical direction. I loved that it was internally divided into sections, not just because it further narrowed what I, as a reader, was expecting, but because it also gave some nice breaking points so that the collection can be looked at as a whole, as a series of four parts, and finally as twenty-three separate stories. I was slightly less convinced on the section focuses, or at least one of them. Wartime Systems made sense, as did Combat and Aftermath. They looked at aspects of war and were guiding but not stifling. I wasn't quite as sold on Armored Force, though, as it was the smallest of the sections and the one that I struggled to find justification for getting its own space. To me, the stories could either have fit into the existing three other sections or a different focus could have been chosen so that each section had at least five stories.

But I should get to the actual stories, which were consistently of high quality. The collection starts out strong with "Graves," by Joe Haldeman, grounding the collection with a bit of history as a vet looks back on a strange incident during his service in Vietnam. Haunting, the bar for the collection is set high, and it does not disappoint. Ken Liu's "In the Loop" picks up next and by that point the hits really just kept coming. This is not a collection that holds back. From Vietnam to a programmer's computer, the realities of war are explored, and brought home to be unpacked like a suitcase filled with mementos from far-off battlegrounds.

The collection has an abundance of powerful stories. "One Million Lira" by Thoraiya Dyer captures the brief showdown between two snipers, teacher and student, each a representative of two sides of a conflict that has split a once-unified nation. Separated by class, by technology, but ultimately united by their grief and deadly talent, the story surprised me with its direction, and managed to both make me laugh and make me cry. It wasn't the only story to manage that feat, either. My favorite story in the collection, "Enemy State" by Karin Lowachee, doesn't even feature battle, at least not anything happening on the front lines. Instead a man, a civilian, has to wait while his boyfriend, his love, goes off to war among the stars. Powerful and deeply tragic, the story dug deep into the feeling of being left behind, of waiting for news, of having a loved one worlds away in danger, and also the plight of the soldier struggling to exist without the war.

There really were too many good stories to mention them all. If there was a weak point I'd have to point to the Armored Force section again, which I felt weren't quite as strong as the rest of the collection. Perhaps if they hadn't all been lumped together I wouldn't have minded, but as it was that section seemed the hardest for me to get through. Fans of armored suits might find their mileage varying, but I thought the most interesting story featuring armor wasn't even in that section, but stuck just before it, in Linda Nagata's "Light and Shadow." Filled with questions about the kinds of armor soldiers can use, both the dead sister exoskeletons that they wear to augment their abilities and the skullcaps they wear to armor their emotions. Tense and offering no easy answers, I thought it handled the idea of armor masterfully, and it was a little strange to me that it wasn't included with the other armor suit stories.

The collection as a whole offers up a very satisfying look at war in science fiction. There's definitely enough content to make it weighty, and enough powerful stories to delve into many different aspects of war and conflict. It manages to be an enjoyable read, not light and not easy but fun and funny at times and heartbreaking at others. It respects war, and most definitely soldiers, while at the same time questioning and pushing and showing the ugly truths that are often swept under the rug. In short, it's one hell of a ride, and one worth taking, though it hits a few bumps along the way.

Bonuses: +1 for a helpful organization within the collection

Negatives: -1 for the Armored Force section