Today Philippe and I mourn the passing of True Detective, a show that will return but in fundamentally different form. We present our eulogies, point-counterpoint style, though in truth we agree far more than we disagree. WARNING: some heavy-duty spoilers, so don't continue if you haven't finished the series yet.

The G - Remember when people used to argue over whether The Wire or Breaking Bad was the best American TV show of all-time? Yeah, fuck that. Sure, I still haven't gotten around to Breaking Bad (I know, I know), but here's the thing: True Detective isn't just the best TV show I've ever seen, it's pretty much the best TV show I can imagine ever seeing.

Now, I could cite any number of things as proof of its greatness: the acting, the dialogue, the depth of characterization. But plenty of other Golden Age of Television shows have these things as well. And it's not the deep social commentary either. The Wire is, in essence, a literary ethnography of the American inner-city and its on-going decay; Breaking Bad, I've heard, does the same for the suburban middle-class; The Sopranos for the American family; etc. True Detective has that kind of stuff too, though its philosophical musings are a bit more abstracted.

It is worth lingering on the acting for a minute, though. It's a thing now for well-regarded film actors move to the small screen, but most of them, frankly, kinda blow. I mean, that Christian Slater/Steve Zahn bullshit ABC is currently trying to smear on the walls? Come on. Matthew McConaughey's portrayal of the idiosyncratic pessimist philosopher/cop Rust Cohle, on the other hand, is a revelation--a portrayal so focused and purposive that, for each 60 minute episode, it positively annihilates any memory of Dazed and Confused. For 60 minutes, McConaughey is Rust Cohle. And as the show progresses, it dawns upon you that Woody Harrelson's meat-and-potatoes cop Marty Hart may in fact be the more complex character. It's a subtle portrayal, which McConaughey's Rust is not, and that's partially attributable to the writing and direction, but it's also testament to how fucking good these actors are in these roles.

And then there's Michele Monaghan's Maggie Hart. She's has gotten some flak for her "vindictiveness" from some, and written off as a plot device by others, but those are shallow readings in my book. Maggie is a good mother and wife driven to the edge by her philandering drunk of a husband, and who, when she reaches that point of no return, stands up to Marty and refuses to back down--even when he threatens violence. This is a scene about consequences (for both Marty and Maggie) of the choices we make, and about agency--Maggie's agency. To the degree that it is about Marty and Rust, it exists to outline the uncomfortable relationship between Marty's personal misogyny and the gendered violence he and Rust confront during the course of their work as detectives.

It is also worth lingering on that confrontation scene, because in fact no violence comes. And for a show centered on the serial murder of women and girls, True Detective for the most part eschews the exploitative, sexualized and festishized violence that plague this category of show, and resists splatterpornography. True Detective lingers on the threat or intimation of violence, not the cheap thrills of graphic cruelty and gore.

And I could go on about how True Detective, more than any other show I've seen, manages to be both highly critical of religious power and deeply respectful of religious beliefs and religious people.

But while of these things are unambiguously good, if I were to identify the elements of this show that are near unprecedented, the things that set it apart from just about anything ever made or anything that will ever be made for the small screen, American or otherwise, it would be two things and two things only.

No American show has ever had such a clear artistic vision

This is art, the way Ingmar Bergman and Andrei Tarkovski films are art. Plenty of Golden Age shows have great dialogue, memorable characters and heady atmosphere. But True Detective is the first show I've seen since Twin Peaks that cares--I mean, really, really cares--about what image and sound can actually do. But Twin Peaks was only really good in that way when David Lynch was in the director's chair. Cary Joji Fukunaga, by contrast, directs all eight episodes. True Detective has a distinct, consistent and incredibly well-implemented artistic vision. It's slow, ponderous, abstracted and careful, the way The Seventh Seal or Solyaris are slow, ponderous, abstracted and careful. There are so many little moments of wonder in True Detective, from the cultish death scene that opens the premiere to the quasi-Lovecraftian horror of Childress' Carcosa, from the overhead shots of Rust's pickup on the freeway to the panoramic views of Louisiana--its foreboding jungles, swamps and the evidence of humanity's decline. And they fit the script as well as you could imagine. As James Poniewozik writes, on one of my absolute favorite moments in the series:

Streetlights streak like heavenly bolts; clouds on the horizon take on an apocalyptic glow; the swamp and backwoods seem haunted. “The visions—there were times that I was convinced that I’d lost it,” Rust says. “There were other times I thought I was mainlining the secret truth of the universe,” and that hits home with a striking visual at the end of the episode, when a flock of birds seems to briefly resolve itself into an intelligible pattern before Cohle’s eyes and ours.


This is the heart of genre darkness

Shows that contain mysteries about the nature of the mystery (Twin Peaks, Lost, BSG, etc.) tend to produce an awkward discourse between writers and fans, where writers drop clues and red herrings, fans develop theories, and writers struggle to create a solution that both satisfies the investigators and still manages to surprise everyone.

The result is almost inevitably disappointing to at least some corners--and True Detective is no different. Sure, True Detective came in familiar packaging--the police procedural, the hardboiled detective story, the hunt for a serial killer, etc. But it kept hinting that it would metamorphose into full-blown horror. There were the little hints sprinkled throughout the season--the recurring patterns, the more-than-coincidental names, the literary references, the signposting. The Yellow King! Carcosa! We grew certain of such things.

But in truth, True Detective used the symbolism and iconography of horror to establish its apocalytptic atmosphere. This is noir, pure and simple, a small-scale holocaust of the human soul--Lovecraft without the tentacled bodies; Revelations without the horsemen. At heart, True Detective is noir, real noir the way Raymond Chandler wrote it. Not the crapsack pessimism of James M. Cain or Jim Thompson, but the deep anguish of Marlowe's world, where the good take punch after punch and still get up and come back for more; where victories are small but meaningful.

The series ends on an optimistic note, as if to argue that it isn't all meaningless. “Well," Rust says as he looks to the stars. "Once there was only dark. You ask me, the light’s winning.”

With Fukunaga leaving and the show reverting to direction-by-committee, True Detective may never scale these heights again. Perhaps no TV show ever will. I'm fine with that.

Philippe: There was never a King in Yellow. No Carcosa, no black stars, no Hastur emerging from the bayou.

Your disappointment was intentional. There were never going to be any revelations or resolutions, nothing that would make sense of it all. It was just murder. Creepy fucking murders that we all overanalyzed. Like Rust, we frantically sought meaning in True Detective, though we feared, perhaps unconsciously, that there was nothing there there. And there wasn’t.

Nic Pizolatto did something brilliant: he’s made manifest the madness that Robert W. Chambers associated with the The King in Yellow.

The play at the center of The King in Yellow not only drives its readers insane, but it provokes obsession, fervent speculation, and endless theorizing among the masses. Did Pizzolatto intend for True Detective to provoke a similar outcome, to cause us to ponder every possible angle, to fall into an online rabbit hole, Googling “Carcosa” and “the Yellow Sign”? Did Pizzolatto seek to make real the madness Chambers imagined?

I want to say yes. Perhaps I am giving him too much credit. Perhaps our collective obsession was simply a typical reaction to such a symbolically dense work of art.

There’s no need to rehash the theories and speculations—we’ve all been proven wrong. There is a larger conspiracy that remains unsolved. As the anchor revealed, Errol Childress’s relation to the Tuttle clan was denied. Maybe there was witchcraft, bayou voodoo meshed with medieval Catholic folklore. Or maybe the Tuttles are a bunch of sadistic psychos whose pageantry was intended to instill terror in their victims.

The pessimistic season finale would certainly have pleased Rust. There’s no resolution in life, no bigger picture, no hidden meanings. There’s flesh and murder. Pain, suffering, and senselessness. Nietzsche, Lovecraft, and Camus knew this. Rusyy knows it. Some of us have accepted this fact, though most of us cling franticly to mythologies and empty platitudes that prevent us from seeing the world in all its meaningless and chaotic glory. “Everything happens for a reason.” Sorry, things just happen. Like murder.

So, in case you didn’t listen to Rust’s pontificating this season, the finale was there to remind you: there’s no fucking point to all.

The philosophy of True Detective has been criticized by philosophers. I am a philosophical layman, but I feel that this criticism is misplaced. The haters have called out Rust for being a rather shallow and superficial philosophers. But what exactly is wrong with his philosophy? Life is a pointless circle from which we cannot escape. As anyone who has struggled with addiction or bad relationships knows all too well, this is how the world works. This may go against out Protestant American individualist penchant for self-improvement. It’s certainly possible, but few of us ever become better people. We remain who we are. And we keep smoking.

This isn’t Satre’s analytical acrobatics, 50,000 words to make a simple point. This is Camus’s directness, bashing us over the head with the simple and seemingly cruel absurdity of it all. There’s no need to read Being and Nothingness, at least not for most of us. The Stranger and True Detective have the same message: It’s all pointless. (Read this for someone smarter than me making a better argument. I’m a sociologist, after all.) 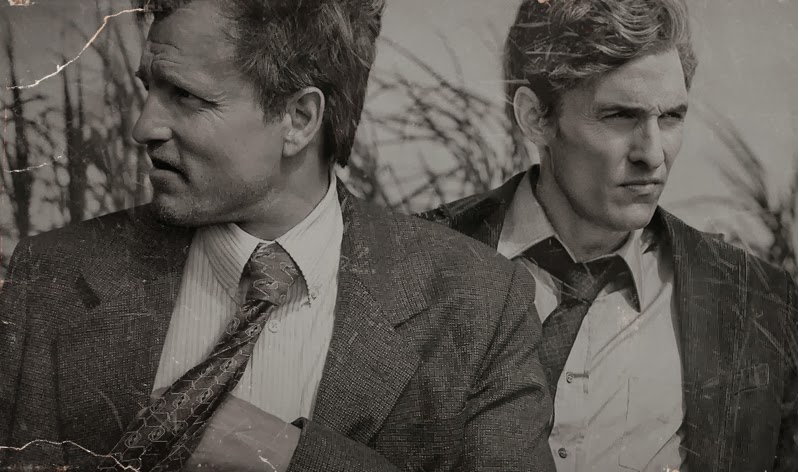 Of course, Rust doesn’t live by his own philosophy. He is seeking meaning through solving the case, the paying the debt he and Marty owe. And that’s the point: we all seek meaning, because the chaos of it all is terrifying. Plus, it’s a cop show. That we got any philosophy from it is a considerable accomplishment.

Last point: I absolutely loved the show’s last scene. Rust and Marty finally got to be buddies. Buddies are the best.