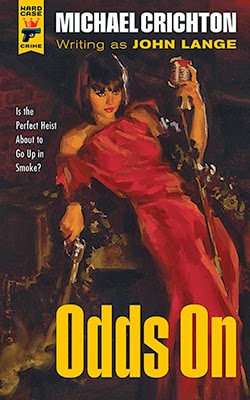 I have no illusions about what I’m doing here. I’m the crime (sometimes comics) guy on a nerd blog. My reviews aren’t going to do much damage. And this is the internet, a media designed for hating. So, drop in the bucket. But it’s not my place to bash the novels I read for this site. Many of these books are small press debuts, penned by someone who’s slaving away as a teacher or adjunct, as a spouse and parent, squeezing in a few pages of edits on a Saturday or outlining chapters on a bus. I’ve never written a novel, so even if I hated their work, they’ve bested me.

But Michael Crichton, I can hate. Even the young, medical school student/aspiring novelist writing under the name John Lange, I can hate. I can hate him for writing Odds On.

Odds On is the story of master thief Stephen Jencks who plans a heist using computers. In 1966! So he hires two other pros and the three set out to rob the guests at the Reina, an uber-posh coastal resort in Franco’s sunny Spain. The heist: the thieves are going to rifle through the guests’ rooms. Yes. This, along with a couple explosions and a diversionary fire, is the heist. The computer program Jencks used merely determined the most efficient sequencing of individual tasks in the robbery—which may be close to what 1966 computers could do. But it’s still boring.

An underwhelming heist does not necessarily doom a novel. Three hundred pages of not much happening does. Two thirds of Odds On takes place prior to the actual, thoroughly boring heist. So there’s a lot of lounging around, a lot of idle banter on car trips, over cocktails, and after way-to-easy sex. For two hundred pages. Rich people taking it easy. The main characters aren’t interesting, neither are the secondary characters. Even the weed-slinging old English Lady and her French gigolo are boring. For three hundred pages.

As for the heist, there’s not much of it, neither in design nor in execution. It’s rifling through people’s shit, after all. There’s a twist in the last quarter of the book that keeps things interesting for fifteen or so pages. But then it’s resolved disappointingly.

I expected more from Odds End. Not because I’m a Crichton fan. In fact, I’ve read two of his books, his John Lange books. Scratch One and Binary. And I really enjoyed them, and was surprised that I did. They were rapidly paced, fun action novels, perfect for a Sunday afternoon. Odds On suits no afternoon. It reads like what it is: the early effort of a master hack. We all know he found his stride. But just not yet.

On the other hand, when he wrote Odds On, Crichton was a medical student. At Harvard. Writing novels. On the side.

Bonuses: +1 for modest approach to computers

Penalties: -1 for way too casual sex (that’s going in my neo-noir manifesto); -1 for being over 250 page (also in the manifesto)