I must admit that I am at a bit of a loss in how to open this week's entry.  One frustration I have had of late, is that I don't have the time or the money to read all of the great books that are coming out each week.  From this week I am bummed that I wasn't able to read the new issue of The Hacktivist, Tomb Raider, Skull Kickers, and others. I know I will read them soon, but the amount of good books on the market is simply ridiculous.  Good, but challenging times for us comic book fans.  Mix in the amazing sales that ComiXology has and the unreal volume of old books available on Marvel Unlimited and it seems I will be reading for some time. 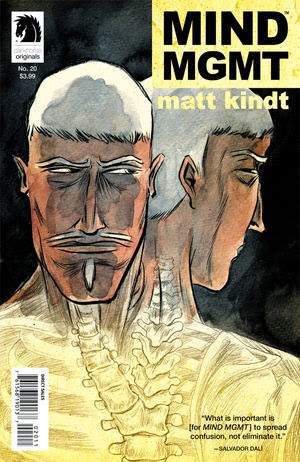 Pick of the Week:
Mind MGMT #20 - I can't say enough for the world that Matt Kindt has created.  This is, not only one of the most gorgeous books on the market, but one of the best spy stories I have ever read.  While the "big picture" story is enough to keep you hooked, Kindt does the little things to really draw his reader in.  The stories in the sidebars, the watercolor art, and the subtle bits of storytelling that really connect you to his characters.  The story of the former dog agent had me in tears before this book even started.  I also love the notion of individuals who have undergone large amounts of experimentation end up finding cover in the circus sideshow.  I urge you not to be moved by the story of these former experiments trying to make sense of their world in a traveling circus spreading murder and propaganda. This is all in one issue!  Go join the Mind MGMT revolution today!

The Rest:
Silver Surfer #1 - I admit that I was excited to take a ride with this cosmic entity as he seeks out planets fit for consumption from Galactus, but was a little surprised to hear they weren't getting along any more.  I haven't read much Silver Surfer, but found this tale enjoyable despite some artistic issues that I had with the Impericon (a world created with technology to shield it from the Heralds.  It was decent with a good hook, but I am not sure I will be hanging ten with the Silver Surfer again on issue #2.

Serenity: Leaves on the Wind #3 - I know it is always dangerous to admit that I am not the biggest Firefly fan (I do enjoy it, but it is not my favorite), but this comic has been quite good.  What intrigued me the most in this issue was the visions that River had.  I felt that the tv show was at its best when it revolved around her.  What she saw and the direction she would like Mal to take may keep me on board.  Fans of the show will no doubt enjoy this title, but those that are casual fans or new to the world will most likely enjoy it as well.

The Walking Dead #124 - The mystery of if Rick was shot with a contaminated arrow is not resolved, but the drama it should bring in the next issue will be very interesting.  Rick and crew just learned that Negan's weapons were poisoned.  Despite getting the better of Negan in this attack, it is going to be an uphill climb.  I have really enjoyed this arc, but hope it ends soon.  While Negan is a vile and disgusting villain (one of, if not my favorite in this series), I am ready to move past him and see where this series is heading.

Captain America: Homecoming #1 - When I was reading this new Captain America, I had very mixed feelings.  It lacked the depth of character that I grew to love reading Ed Brubaker's run, but it had a nice nostalgic feel to it.  Simple, but good classic comic book action.  I was pleasantly surprised to see that this issue contained a bonus classic issue of Captain America (Issue #117).  I have no idea where this series is heading, but this was a nice trip down memory lane.