Plants vs. Zombies 2: It's About Time 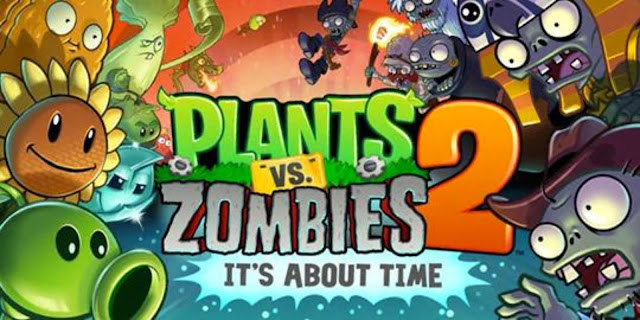 Finally, the sequel to the wildly popular mobile favorite Plants vs. Zombies has come out. I think this solidifies PopCap as THE makers of the best mobile games available. Between Bejeweled, Peggle, and PvZ, they've made some of my favorite mobile titles and they definitely have more depth and better programming than 98% of the mobile games out there. While I've enjoyed Hill Climb Racer, Angry Birds, and Army of Darkness, no single developer has come up with as many quality games as PopCap.

There are three main levels in the game. The first is Ancient Egypt. Here the zombies are also mummies. If you're unfamiliar, you have to protect the home base, in this case a pyramid, from the oncoming undead. You choose the plants you're going to use in order to do so, then do your best to keep the mummy/zombies from making it into your pyramid to eat your brain. Each section has ten levels, starting with the Ancient Egyptian plane. Once you've completed the ten levels, you have to go back and win ten stars to move on to the next level, Pirate Bay, by re-playing enough of the first ten levels to win stars. Once you've collected ten stars, you can use a stargate to transport through time and space to the next plane and fight zombie pirates.

The second level is Pirate Bay. As you can see, the zombies in this group of levels is made up of pirates (Didn't see that one coming, did you?). Unlike the previous levels, the planting grid isn't complete. There are planks that allow zombies to walk up to your plants. They also attack by swinging from ropes or being shot out of cannons across the water areas. They are easily repelled using something akin to jumping beans. These plants are shown here second to the bottom on the left with a cost of 50 sun points. They're very handy when repelling water-crossing enemies, but they quickly fall asleep after doing so and are extremely easy to eat.

Finally, there's the Wild West group of levels. Along with upgraded plants that you earn along the way, these levels have train tracks that allow to you move a single, or sometimes multiple plants up and down the screen. This allows you to take care of different levels of zombie outlaws as they come along instead of being stuck in a single grid square watching those darn undead walk right past your three-headed pod shooter. This level also brings with it a new slew of enemies, including one old timer who clearly worked in a mine in his living years. This piece of maddening programming genius jumps the entire board, then returns to eat your precious plants from behind. I know he's why they created the two-headed plant, but the plant was  generally just so ineffective that I essentially chalked his kills up as a loss and shot the bastard from behind after he started to move back to their side of the board.

That's the perfect lead-in to discuss the various characters in this mobile masterpiece. First, we'll start with the plants.

The plants are your friends. These are all that is stopping those blood-thirsty undead from chowing down on your medulla oblongata. Each has a special form of attack and their own advantages and disadvantages. They start out at a low price and you are able to open up more as you go along. For example, the first of the three plants above costs 150 sun points (you either collect these as they fall from the sky or make your own using sunflowers) and can punch zombies both in front and behind. However, he is limited to the single blocks on either side. The next plant fires boomerangs, or at least what appear to be boomerangs. It costs 175 sun points and doesn't pack much punch, but his attacks can reach enemies completely across the board. Finally, the coconut cannon is a whopping 400 sun points, but his attack will wipe just about anything it hits on the board.

This next crop of plants was probably the most useful. The first is a fire breathing cousin of the venus flytrap. His fireballs spread three blocks wide and traveled two blocks ahead, giving his damaging flames a wide swath of destruction. The second is an artistic rendering of the pod shooters. These came in four forms. The first shoots a single pod, the second two, the third three, and the fourth fires a single pod in both directions, in front and behind. The third plant is obviously a corn cob. He fires a randomly selected piece of corn or pad of butter. The butter was particularly useful as it causes the zombies to pause for a brief moment until all of the butter has melted from their faces. It cost 100 sun points. The fire breather was 150. The pod shooters cost 100 points per pod, so the double-shooter cost 200, the triple shooter 300, and so forth. There are other plants available including a land mine and the aforementioned sunflower, but this gives you a general idea of what's out there.

Just like the plants, the zombies come in many forms. The first pictured above is the standard mummy, easy to kill and fairly slow on the approach. The one pictured next was the bane of my existence in the Ancient Egyptian levels. He uses his wand to suck up sun points as they fall from the sky or are created by your sunflowers. He starts sucking sun as soon as he steps on the board so it was necessary to have a long distance weapon like the pod shooter or corn cob to take him out quickly before he could steal too many of your precious sun points (which were used to buy more flowers). The next two come from the Pirate Bay level. The first wasn't so annoying on his own, but he was able to send out his pet parrot to eat your plants without so much as a "thank you." Again, it is useful to have a long distance plant to take this annoying fellow out as quickly as possible before his bird could do too much damage to the carefully constructed plant formation you have been creating. Although the punching plant (as I called it) is able to destroy the bird, not much else can stop it from chowing down on your sunflowers or other vital plant friends. Finally, there's the standard pirate zombie. He is the Pirate Bay equivalent to the first mummy. Slow and fairly weak, although when attacking in groups he and his cohorts could be quite annoying. 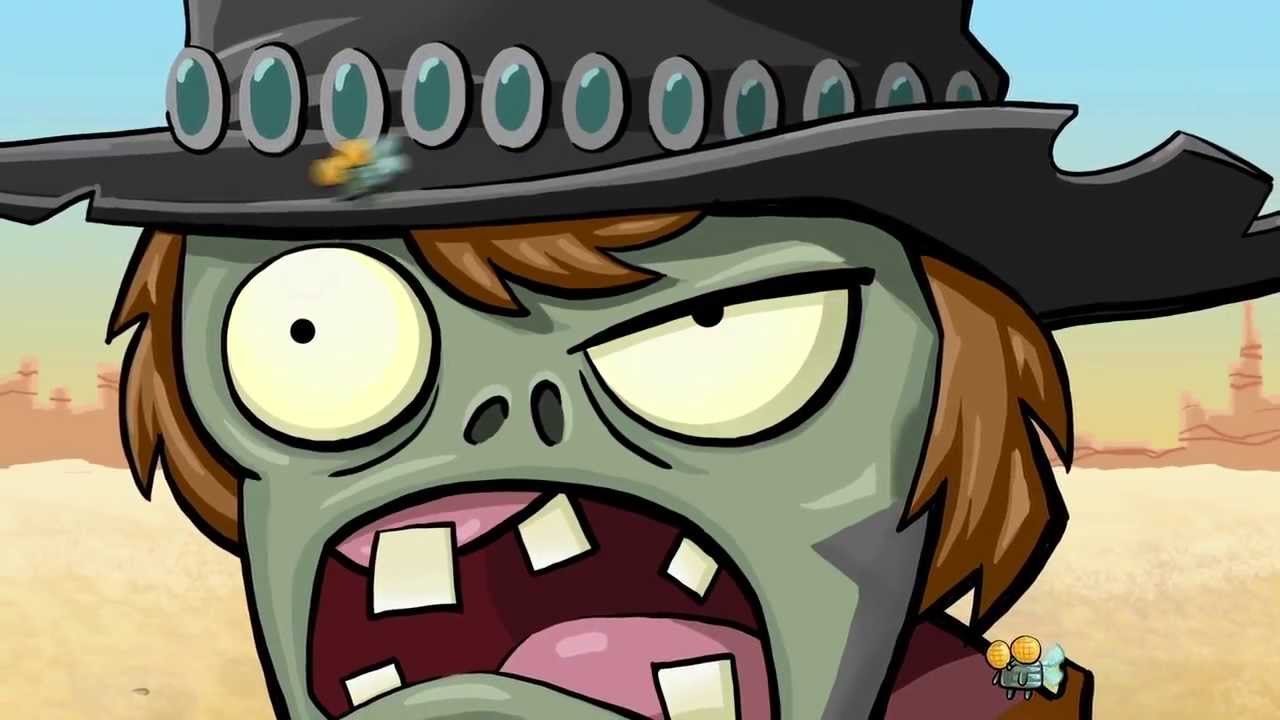 The Wild West zombies presents its own set of issues, but I think Pirate Bay was probably my favorite level. At one point, cannons come out and fire midget zombies at your side of the map. Those little guys made the funniest noise and, although they were extremely annoying, they were also a source of never-ending laughter for yours truly. 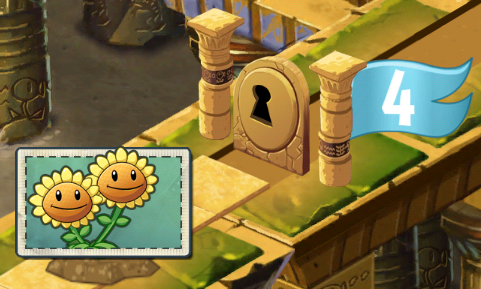 Not only were there the standard levels described above, but you could access special areas by collecting (or buying) keys. These would open up entirely new areas of the maps that had levels with specific requirements. For example, one level chooses which of the plants you could use by bringing them up a conveyer belt system on the left-hand side of the screen. You are normally allowed to pick six plants for each level, but in these special levels you had to take what you were given. Sometimes this proved to be quite useful, while others it gave the gamer a challenge that bordered on headache. 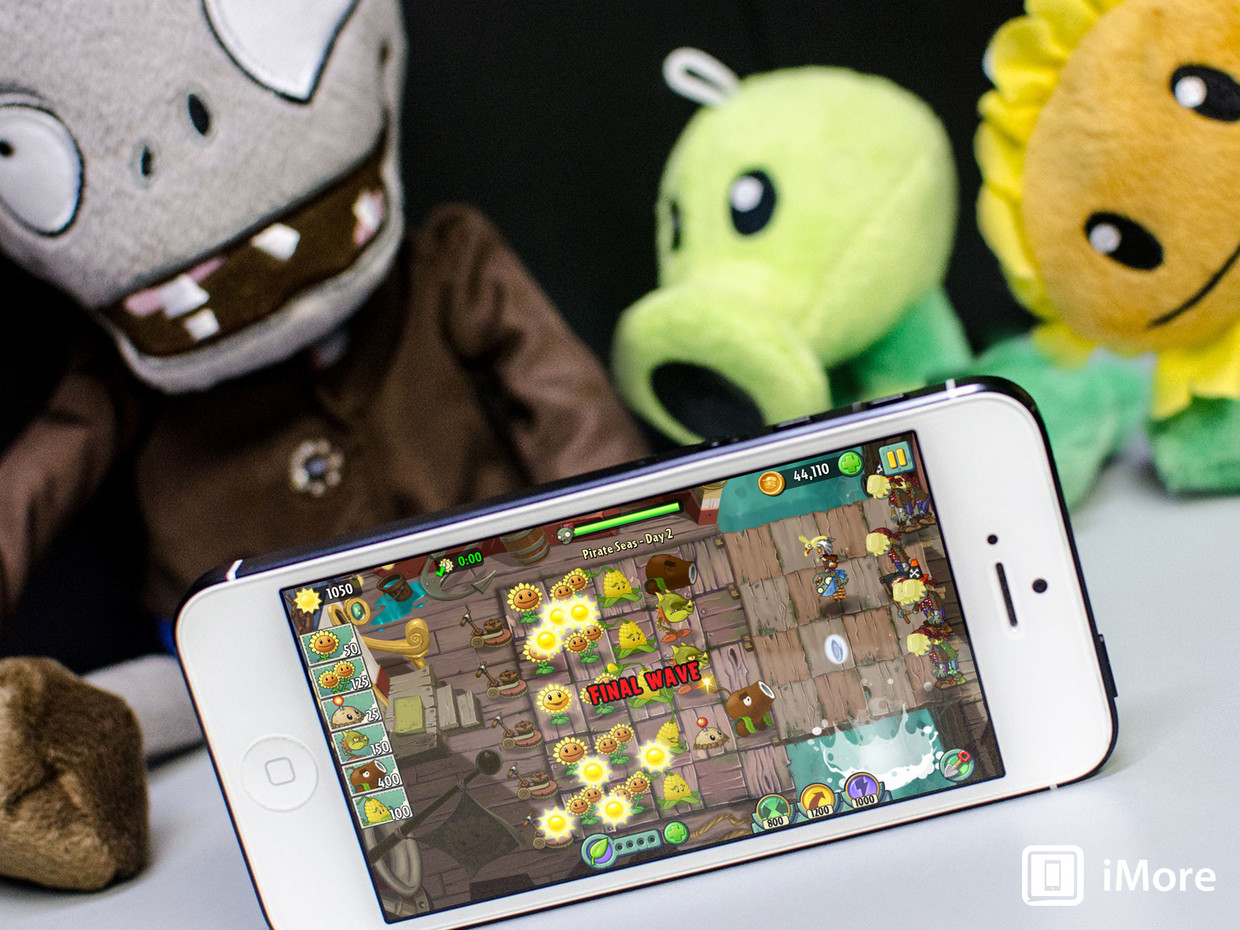 The player moves from level to level via stargates. You can clearly see the star here that took you from Ancient Egypt to Pirate Bay. While I wouldn't exactly call it replay-ability, you were pretty much forced to go back and replay levels in order to earn stars and open the stargates. I found this mildly annoying at points because certain requirements were laid down before a level was begun. If you failed to meet these requirements (kill 15 zombies in 30 seconds or only use 12 plants), you failed to earn the subsequent star. While I don't necessarily care for linear games, being forced to go back and replay nearly every level in order to progress was a bit of an annoyance. If there was one drawback to the game, this was it. I would have preferred to have the game move in a linear fashion and offer bonuses for replaying certain levels. Don't get me wrong, you were richly rewarded for completing the levels while following the requirements. Still, forced replay isn't really my cup of tea. I like to have the option to replay a particularly fun level rather than being forced to do so in order to progress. However, it is what it is and I managed to amass enough stars to make it through all three levels without paying for the pleasure.

PopCap has done it again. They managed to create a game that is fun for all ages, addictive, and original. If you are looking for the next gaming app to add to your handheld device or iPad, this is it. While they didn't really break any new ground as there are a plethora of tower defense games out there (the format seems to work well on controller-less devices), this is definitely one of the best. If you're as tired of Angry Birds as I am and Peggle is wearing thin after your thousandth hour, give this one a look. It's free both in the iTunes store and on Android phones, so you won't blow your load on a game that doesn't turn out to be all that you'd hoped. Instead, they operate on the much maligned pay-to-play system where the game is beatable without spending money, but there are plenty of opportunities for you to make it easier on yourself by dropping a buck or two on keys, stars, or special plants. I refuse to take part in this game structure for the most part, just on general principle. That said, there were lots of times I REALLY wanted to throw a few bucks at it in order to make the game easier. However, it isn't necessary to complete the game and you can play it successfully either way. All in all, Plants vs. Zombies 2: It's About Time was a joy to play and just challenging enough to keep me coming back. I highly recommend you give it a shot and see if it's up your alley.

Bonuses: +1 for the leveling system that kept me coming back for more. It makes you want to keep playing to open up new and more powerful flowers with which to dispatch the undead.

Penalties: -1 for forced replay of completed levels. Once I've beaten a level I'm ready to move on. I don't want to have to go back and beat the same level again, this time with more stipulations on how I finish the task.