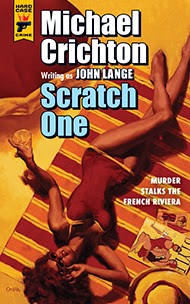 
A fairly dumb protagonist is essential for a good mistaken identity story. A normal person would probably notice something amiss with the initial delivery of a strange package or furtive encounter with Peter Lorre. But for a mistaken identity story to get anywhere, it should take the protagonist a minute to figure things out, to learn that she’s unknowingly walked into something serious, and that she should get a gun somewhere. Maybe a fake passport. If things are cleared up too quickly—no, I am most certainly not the person you’re supposed to meet at this train station—then the story ends. The right person gets shot. Roger Carr, fortunately, is slow on the uptake. Don’t let his Harvard law degree and job at a fancy New York City firm fool you: he’s pretty dumb. People mistakenly call him to schedule meetings, he obliges; someone gets shot while talking to him, he’s nonplussed. He’s dumb. But an American kind of dumb. Earnest dumb.

I would hate this guy in real life.

Scratch One is one of Michael Crichton’s early novels, written under the name of John Lange. Crichton was a medical student at the time who chose a wise plan B: write hacky novels. We all know how that turned out for him. Scratch One is the work of a journeyman storyteller: a terse, formulaic spy novel done well. The story revolves around Roger Carr, an American lawyer mistaken for an American assassin. It’s the late sixties and Israel is looking to buy arms on the European black market. Some agents working for “Arab nations” (Syria? Iraq? there are a few of them) need to stop this from happening, as well as to stop the Americans and French from stopping them from stopping the arms purchase. Everyone involved thinks Carr is a CIA assassin who is there to kill the agents looking to kill the arms dealers. There’s a car chase, a girl, sulfuric acid, the Monaco Grand Prix, Cannes, car rides, lunches, drinks, tailored suits, cars.

Crichton’s deftness as a storyteller is on display here. His prose is pure economy. There’s an unadorned terseness in the writing, clear description and snapping dialogue drive the novel. The storytelling is effortlessly paced right from the opening series of murderous vignettes. The book gets bogged about a third of the way through once Carr meets the love interest Anne—she’s charming, but their endless first date involved no gunplay or attempted poisonings. It takes Crichton about twenty pages too many to get back to the intrigue, but he then keeps that up for the rest of the book.

Bonus points for a really well-written car chase, which is always an achievement.

The problem with this book is its hero, Roger Carr. He’s not only dumb, he’s a bit of an asshole. A spoiled rich kid, the son of a senator, a Harvard legacy who got hooked up with job well beyond his capabilities. Towards the end of the book he becomes somewhat sympathetic, once the dipshit realizes his life is in danger—so I cared a bit whether he lived or died. While Carr might be unlikable, the rest of the book’s characters are an entertaining lot: Liseau, the cultured torturer; Brauer, the principled hitman; the cynical French intelligence officer, Vascard; Gorman, the boofonish American spymaster. And Anne, the well-read, car enthusiast dancer from Australia who has a thing for American rich guys who flirt like the internet.

Despite myself, I enjoyed Scratch One. There’s nothing terribly special or innovative about the novel. And I’ll probably forget the specifics by my second cup of coffee in the morning. But I read it in three quick hours, the surest mark of a good story, or at least a not terrible story.

Bonuses: +1 each for '60s French cool and a well-written car chase