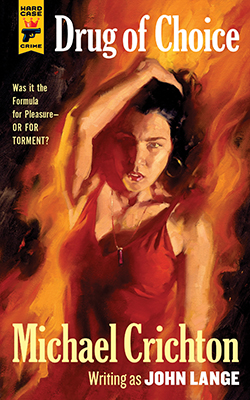 Not too long ago a weighty package arrived from Hard Case Crime, one of my favorite publishers of noir and pulp. Inside were eight novels by popular science fiction writer Michael Crichton under the pen name John Lange. I'd never heard of these books before, or known that Crichton had once published pseudonymously. But apparently he did just that...while a student at Harvard Medical School. Let me just state, for the record, that this is insane.

Later, even after Crichton became famous for books like The Andromeda Strain and Jurassic Park, the Lange novels languished out-of-print and became sought-after collectors items. Why--I'm not sure. Perhaps Crichton was embarrassed by them? Or perhaps there was something enjoyable about maintaining the mystery? Either way, Charles Addai and the good folks at Hard Case Crime managed not only to convince Crichton to put them back in print, but to re-edit the books as well.*

I decided to start with Drug of Choice, a speculative mystery about a secretive research-and-development company and its experiments with psychotropic drugs. The book is the purest pulp, the kind of thing I've often dreamed of finding serendipitously in the paperback aisle of used bookstores. Yet those adventures are often weighted down by frustrating anachronisms, like "golly gee willikers" dialogue or the sexism/racism/homophobia that was once normative but is now (thankfully) objectionable. Drug of Choice is not saddled with these burdens.

The story is tight, a thriller with just the right balance of mystery and action, and has an appealing Twilight Zone sensibility to it. The writing is also quite clear and focused. Sure, it may lack even the slightest hint of poetry or symbolism, but Crichton's prose is ultra-efficient and smooth. I read the book over the course of four days, though I easily could have consumed it in one sitting. And I mean that as a compliment.

My only real criticism is that, while a good example of pulp fiction, Drug of Choice by definition isn't really aiming to be anything more than that. It's good fun efficiently delivered, but at the end of the day, that's all it is. And the ending is a bit convoluted, though it's by no means terrible.

Still, the themes of unethical research, corporate malfeasance and manipulation of individuals should resonate in today's world as much as they four-and-a-half decades ago, making this one I unreservedly recommend to those who like their fiction pulpy.

*How much be managed before passing away in 2008 is not clear.

Bonuses: +1 for being purest pulp fiction; +1 for not buzzkilling with racism/sexism/homophobia, like so many contemporaries.

Penalties:-1 for not really transcending purest pulp fiction either; -1 for the goofy ending.