I am proud to report that Abraham's Army has raised over $2,400 for the month of Movember! To check in on my sad mustache or to contribute to the cause, click here.  Not a lot of books on my pull list this week, but very pleased with the titles I picked up.  The Wake from Scott Snyder and Sean Murphy was outstanding and a new Star Wars title from Dark Horse examines the life of Han and Leia's daughter. 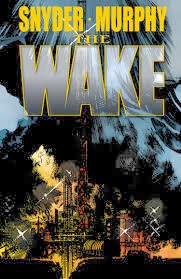 Pick of the Week:
The Wake #5 - Scott Snyder and Sean Murphy should work on more projects together.  Murphy's ability to elicit emotion and horror pair perfectly with the heart-filled, dark stylings of Snyder.  This was a huge turning point in the arc that delivered on all levels.  It was exciting, terrifying, emotional, and surprising.   We learn that the rig was never the target, but that the mainland is what is at stake.  An all out charge is unleashed and our group of heroes make one last ditch effort to save the world.  It sounds cliche, but this story is anything but.  An absolute gem of an issue.

The Rest:
Star Wars: Legacy #1 - Taking place 138 years after A New Hope, Star Wars Legacy looks at the Star Wars Universe through the eyes of Ania Solo, daughter of Han and Leia.  She is a scapper who stumbles upon a communications droid that is carrying some valuable information for the Empire.  The first issue sets the stage nicely as the Jedi don't swear loyalty to the new Empire and the Sith seek to regain control.  It was confusing to think of the Empire as the good guys, but something tells me that power still corrupts.  Good debut for a series I will continue to read.

Daredevil #33 - Daredevils dance with the occult continued in this issue as he sought to gain some pages from the Darkhold, a mystical book.  While I enjoyed how light and fun this issue was, the monsters post-Halloween lacked their initial appeal.  It was a fine issue with a nice ending, but the monsters seemed out of place in a Daredevil comic.