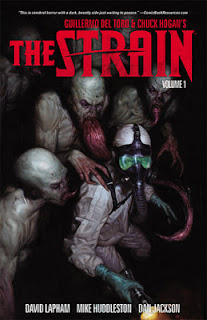 I feel like a hack. I’m reviewing the comic adaptation of a novel I have neither read nor will likely read. After all, it’s a vampire novel. As a teen I read a few vampire books – this was Anne Rice's early nineties – but I never developed a love for the sub-genre. And visionary director Guillermo del Toro isn’t going to change that. (Though I’d watch another vampire film of his. Cronos, anybody?)

But I did read horror comics, including vampire comics. In fact, the first horror comic I read was Blood of Dracula. So I suppose my review has some validity – this is Dark Horse' comic adaptation of The Strain. I may not be a hack.

The Strain, co-written by del Toro and Chuck Hogan (The Prince of Thieves) is a typical vampire story – so it’s hard to fault David Lapham (Stray Bullets) for his adaptation of it. In fact, I am fairly certain the novel is a modern retelling of Dracula, at least the first few issues read like it. If so, del Toro and Lapham get some points. Our Dracula’s transatlantic crossing takes on very modern, post 9/11 trappings, while our Van Helsing begins his career as a vampire-killer while imprisoned in a Nazi concentration camp.

The Strain eventually employs many post-Dracula vampire gimmicks as well. There are ancient vampires, there’s a truce, there’s a vampire breaking a truce. Potential vampire apocalypse! You lose points for such standard lore, especially if you’re Guillermo del Toro. And there’s a potential for a divorced-dad-just-wants-to-see-his-kid subplot that could end up really pissing me off.

The vampires themselves were a bit distracting. The long tongues – think a tentacle with a talon on the end –  looked a bit silly. I’m all for non-sexy vampires – you can always go Nosferatu rather than Dracula, sometimes even pulling off something interesting. But, The Strain adds a long list of non-scary non-sexy vampires, a list that includes Eddie Murphy’s Vampire from Brooklyn.

Mike Huddleston’s artwork – though too often looking unfinished – and Dan Jackson’s moody colors are well-suited for a vampire book, just maybe not this one. It goes back to the tongue. I suppose Huddleston deserves some blame for it, unless he’s following from del Toro’s description. Since I don’t plan on reading the book, how could I possibly know this?

Ultimately, I was disappointed with the first five issues of the book. While there were a few intriguing elements – particularly using in the post 9/11 security environment as a setup – The Strain is frustrating because of who is involved in its making: del Toro and David Lapham. The involvement of these two, on the other hand, does mean that there may be a lot more story here, a story worth our reading.

Either way, it doesn't want to make me read the novel. But I may continue reading the comic.

[Need to see how we do things scientifically? Here's our formula.]
Posted by Philippe Duhart at 12:45:00 PM