Blur? Never heard of it.

Blur was a relatively ignored game, selling only 31,000 units in its first week. Compare that to the 6 million units that Grand Theft Auto IV moved and you get some idea as to how few people actually played this gem. That said, it got pretty good reviews that resulted in a score of 82 on Metacritic.com. Unfortunately, that didn't seem to do much for sales of the game, which is too bad because it's a whole lot of fun!

Make a career of it!

Career mode forces you to earn "bulbs" in order to level up. A first place finish in a race gets you five bulbs, second four, third three, and fourth gets you nada. Collecting bulbs opens up new cars, tracks, and NPC opponents. There are four types of race in Career mode.

Checkpoint is a single car time trial. You have to make it through various checkpoints before time runs out or the game is over. There are no NPCs coming after you, but the tracks themselves are difficult enough to make this a challenge. Some are paved roads while others are off-road dirt tracks where you'd much rather be in the Range Rover than a Toyota Supra or BMW.

Destruction is a timed race where the objective is to destroy as many NPCs as you can before time runs out. As you pass various checkpoints, time is added to the clock, but this race doesn't have a finish in the traditional sense of the word. It always ends when the clock hits 0:00. Depending on how much damage you've caused, you might get five bulbs or you could have to start over.

Race is just what it sounds like. You versus twenty NPCs. Activision Blizzard did a good job with the AI in this instance. These guys are ruthless and very good at driving their cars. Even on the Easy setting, coming in third or better is a significant challenge. I can't tell you how many times I fought and clawed my way to first place, only to be hit by a power-up mere feet from the finish line, resulting in a fourth place finish or worse.

Finally, there's One-on-One. This is essentially the same as a boss fight. You have to earn your way to these races by gaining enough bulbs in the lower races to open them up. Once you've done what's necessary to get to the race, you have to go head-to-head with the most talented NPCs in the game and their cars are souped-up beyond the norm. However, if you manage to beat them, you get to keep their car in your garage and use it in future races.

Multiplayer mode is where this game really earns your money. Over XBox Live, you can take part in 20-player head-to-head races. You can play in "Friends Only" mode with just six or seven people if you like, but it's a lot more fun to take a party into a race against other folks. With 20 cars on the track at once the game becomes a total attack on the senses. Power-ups are constantly flying and no one stays in first place for long. Modern Warfare and Halo are quality multiplayer games, but they can't compare to the intensity and carnage that Blur brings in a 20-person race. It can get a little aggravating at times, but that's all part of the fun. You can go from first to last in a matter of seconds, and vice versa. Although the career is enjoyable, I really fell in love with Blur because of the multiplayer aspect. For one thing, very few games support this number of players in one game space. It doesn't have the technical reality of Forza or Gran Turismo, but it's not supposed to. This game is about taking regular old car races and adding some unrealistic, yet extra-tasty spice.

Mario Kart with a Dodge Viper?

Blur is essentially the perfect mix of Burnout and Mario Kart. It uses real-world tracks and cars, but has power-up attacks that are identical to Mario Kart in everything but name. Here are the power-ups from Blur:

In order, Shock is fairly close to the blue turtle shell from Mario Kart. It attacks whatever car is in the lead with lightning bolts from the sky that both damage and slow the leader. Like Mario Kart's lightning, it also can take down multiple enemies at once. Cars in the front of the pack are all at risk from the electric strikes. Mine is like the banana peel, dropped from your car to attack anyone coming up from behind. Barge is the only one that doesn't have a direct parallel to Mario Kart. It sends out an EMP in all directions, damaging any rivals in close proximity. Bolt is the green turtle shells. You even get three of them, just like it's Nintendo ancestor. Shunt is the same as the red turtle shell, seeking out the car immediately in front of you and hitting them, HARD. Nitro is the mushroom, giving a short boost of speed. Shield is similar to Starman in that it makes you invincible to attack. However, running into enemies while it is active doesn't do damage like its Mario counterpart. Finally, there's Repair. Unlike Mario Kart, your car can eventually be wrecked in Blur. Being wrecked is about the same as falling off the side in Mario. You come to a complete stop and it takes several seconds to re-enter the race. Tougher cars like SUVs and vans can take more punishment than smaller, faster vehicles,  but they can all be wrecked with enough damage. One of the main differences between the two games is the ability to stockpile power-ups in Blur. You can carry up to three at a time. You can also dump undesirable power-ups if you don't need them, but be careful where you let them go because racers behind you can pick them up and nail you with what used to be your own weapon. 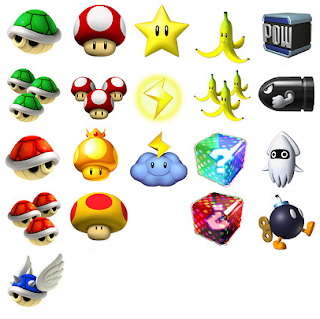 When it comes down to it, Blur didn't break any new ground. You'll find most of the same cars in racing games with more realistic driving, tracks, tech specs, etc. What it did was to take the best components of several other games and mush them together into an intensely enjoyable and totally unique gaming experience. If you're a fan of racing games, I highly recommend you go to Gamestop and pick up a copy for twenty bucks. It's well worth it. 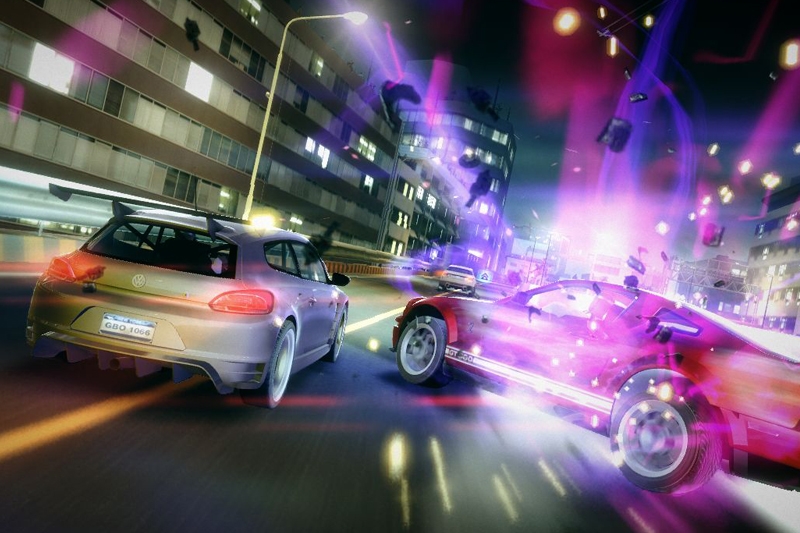 Bonuses: +1 for stealing from the right games. You can't go wrong copying Mario Kart or Burnout if you do it right, which they did.

Penalties: -1 for not having any Porsches or Ferraris. I love the Audi R8 as much as the next guy, but any self-respecting racing game has got to have the old standards of supercars. Blur has a nice mix, but unfortunately these two makes didn't "make" it into the game. (I'm sorry. I'm so very, very sorry. Call the pun police!)

Nerd coefficient: 8/10. "Well worth your time and attention."