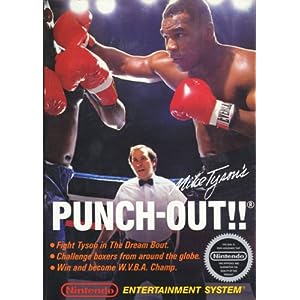 No, ladies, this isn't my phone number. It's the cheat code to skip all other fighters and go directly to Mike Tyson. I didn't look it up. I didn't have it written down somewhere. I still, at 35, have that code memorized from the weeks I spent on this game. Most everybody remembers the code to Contra. I can actually hear many of you right now saying, "Up, up, down, down, left, right," et cetera, as you read this. A much smaller portion of the gaming population remembers the code to Iron Mike. It's one of those cheat codes that actually does you more harm than good. Now that it's entered, you have about 35 seconds of gameplay left before you have to restart. Some "cheat." I'm sure there are suicide codes in some of today's Rated M games, but do any of them have the violent outcome AND star power of good old 007-373-5963? I doubt it.

What made this game great wasn't Tyson's endorsement. If anything, Crazy Mike's appearance made the game worse by creating a nearly unbeatable boss at the end. I've spoken to people that claim they took down the champion, but I never did so myself. What made this game so great was the cast of characters that made up the yellow brick road leading to Mike Tyson. Even my girlfriend could make it through Glass Joe and Don Flamenco. Where the game started to pick up in level of difficulty was King Hippo. This enemy required that the player know a specific series of well-timed button mashes in order to knock him out. For those who haven't played in a while, you had to wait until his hands were raised, then punch him in the mouth. This caused his pants to fall off, for some reason, allowing you to repeatedly punch the band-aid covered injury to his monstrous gut. Repeat the formula several times and you were moving on up.

The next enemy to test your mettle was Piston Honda. He was an Asian that was just positive you'd insulted his culture for some reason. Honda didn't present much of a challenge, either. He did a dance around the ring that, if capped off by an uppercut by you, would drop like a sack of puppies...cute! After Piston Honda came the real challenges. Bald Bull showed up twice in this game.

Without a well-timed left on his third hop, you were dropped. He re-appeared later in the game with a shortened and more difficult charge, but the skill required to win was the same. It's all about timing. If you get it right, you move on. Get it wrong? Well, I guess you're fighting Bald Bull again (or throwing your controller across the room like me). Finally, after fighting your way through about a dozen enemies, some tough, some clearly made for children, you hit the really tough guys at the end. Soda Popinski, Von Kaiser, and my personal favorite, Super Macho Man! There were rumors this was an homage to Randy Savage, but I don't see it. What do you think?

I spent days, if not weeks of my life playing this 8-bit piece of gold. Even though I was never able to topple the mountain that was Mike Tyson - he's more of an unbalanced hill now - I still played this game more than anything this side of Zelda and Mario. If I had an hour to kill, I would play my way through to Tyson and enjoy every minute of it. Although I never mastered the final boss, I was able to take down every other challenger they threw at me. I get a big smile on my face whenever this game is even mentioned. I actually scream like a little girl when someone pulls out the original Nintendo and pops it in, as my friend Matt did this past weekend. This one is a classic of gaming and will always remain so. If you still have your 8-bit Nintendo and a copy of Mike Tyson, I highly recommend you give it another playthrough in the near future. Even if you can't beat Tyson, as I can't, it's still tons of fun trying to recall the timing on all those fighters that used to be as familiar as the back of your hand.

Penalties: -1 for making Iron Mike so difficult. I broke at least  one controller due to this overpowered boss.

Nerd coefficiant: 8/10 Well worth your time and attention.